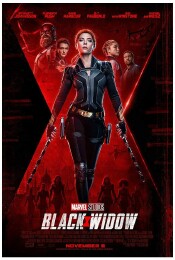 “Before I was an Avenger, I made mistakes … and a lot of enemies.”

To say that Scarlett Johansson’s solo Black Widow film is overdue is one of the understatements of the decade. Fans of the MCU have been calling for the character to have a film of her own; all the while characters like Captain America, Iron Man and Thor ended up well into their third films with the character playing key roles in the threads that pulled all of these films and characters together. Marvel often assured us it would eventually happen, but it sure appears to have taken too long. It didn’t help that the character dies in the final Avengers film, and it seemed less likely she would or even could get her own film by then. But Marvel kept assuring us that it was going to come. So we waited again for the character’s life-after-death coming-out party. Of course, being dead isn’t quite the damper it used to be, particularly in these superhero films. And with the MCU about to enter into the long-running comic staple of the multiverse (which is also true of the DCU) there is a good chance that, as they say in the comics, she might “get better”. But when this film finally did appear to come together, the world was forced to wait through several date changes and another year of anticipation because of the unexpected arrival of COVID-19 on the real world scene. So we waited for another year, all the while praying the film would not fall to the ever-increasing trend of finally just releasing long-delayed theatrical films on streaming services and skipping the lines at the box office. The only real letdown is that after seeing the film,v it will feel like it was delayed far too long.

The film starts with a scene almost right out of the popular television series The Americans. There is a typical American family, at least that’s how they appear. They are about to have a typical family supper when things get not so typical. Suddenly it’s time to take that trip the parents have been planning for. Mother Melina (Weisz) and Pop Alexei (Harbour) take the family on a quick electrifying road trip and eventually onto a plane where they barely escape. You see, Mom and Dad were Russian agents planted in the US with their fake American daughters, Natasha and Yelena. They arrive safely in Cuba and are whisked away to whatever the Soviet system has in store for them. We jump ahead and join adult Natasha (Johansson) just at the time after Captain America: Civil War. She’s on the run from the government for violating the restrictions depicted in that film.

Natasha receives a strange package from her estranged sister Yelena as an adult, played by Florence Pugh. She is on the run from the Black Widow program, which was/is a Soviet program to chemically transform normal women into mindless super-soldiers. Someone has created a chemical cure, and Yelena has been exposed and entrusted with the remaining stash. Her mission is to find the training program and release the minds of all of the women. So now the two sisters team up to undertake this mission, but they need someone who might be able to direct them. That means breaking Dad out of a wasteland prison, to find he’s become somewhat of an overweight/mentally challenged ex-Russian-superhero called the Red Guardian. A nice nod to many of the comics of the 1960’s and 70’s. He still fancies himself a hero and squeezes into the old costume, which is a kind of a Soviet version of Captain America. He leads them to where the experimentation in mind control started with pigs. There they encounter the mastermind, and it turns out to be Mom. The family reunion is short-lived, but the family decide to work together again to free the mind-controlled agents.

Of course, there has to be a villain, and here it’s the person of Dreykov, played a bit over-the-top by Ray Winstone. While he’s not as compelling a bad guy as some others in the MCU, can anyone say Loki? The chemistry is actually good here between the family members and the bad guy. The interactions also provide a convenient forum to learn all about Natasha’s early years after her “family” ran back to Russia. With some interesting plot developments, we end up getting a lot of character background that, again I wish we had had before she was eventually killed off.

From the jump to the flashbacks, the movie plays out exactly like a direct sequel to Captain America: Civil War with the same kind of 70’s political-thriller style and cinematography started in Captain America: The Winter Soldier. And that’s where the delays are truly felt, and they go back long beyond the pandemic delays. This is such a true sequel that you have to ask yourself why it took so long. And why so many films jumped in front of the line. I don’t have an answer to that, but it’s a kind of double-edged sword here. I love the callbacks to that film and the continuation of one of the MCU’s better stylistic decisions, but it often feels a little too little too late. I think I would have been better prepared to have watched those two Captain America films in preparation for watching this one. I suggest you take advantage of the warning I never had, and watch those films before heading out to see Black Widow. I guarantee your mileage will be better than mine was. When it’s released on video, I intend to watch it as part of a three-film marathon. Don’t get me wrong; this was the perfect placement in MCU continuity to tell this back story. It works perfectly. It fits in those other films like a glove. It easily explains why her “super buddies” aren’t there to help. It just should have happened much sooner, when those films were fresher.

The cast make this a pretty solid film. There is all around wonderful chemistry between these characters, and the somewhat dysfunctional banter makes them feel more like a real family than most film families. There is less of the epic f/x show here and far more human action, drama, and interplay. It fits in well particularly with Winter Soldier, and for the first time in nearly two years, it feels like Marvel is back, and it’s time to get excited about the movies once again. It’s been a while since I had the occasion to put on a Marvel shirt. Guess what? “It still fits.”

Gino Sassani is a member of the Southeastern Film Critic's Association (SEFCA). He is a film and television critic based in Tampa, Florida. He's also the Senior Editor here at Upcomingdiscs. Gino started reviewing films in the early 1990's as a segment of his local television show Focus. He's an award-winning recording artist for Omega Records. Gino is currently working on his 8th album Merchants & Mercenaries. Gino took over Upcomingdiscs Dec 1, 2008. He works out of a home theater he calls The Reel World. Favorite films: The Godfather, The Godfather Part II, The Body Snatcher (Val Lewton film with Karloff and Lugosi, not the pod people film), Unforgiven, Gladiator, The Lion King, Jaws, Son Of Frankenstein, The Good, The Bad And The Ugly, and Monsters, Inc.
Ferris Bueller’s Day Off – Steelbook (Blu-ray) Beate