Posted in: Disc Reviews by Brent Lorentson on July 9th, 2021 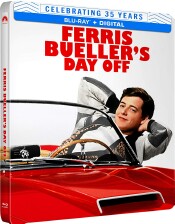 When it comes to the 80’s teen comedies, I think we can all agree John Hughes is the king, and I feel just about every kid who grew up during that time has a strong opinion on what the “BEST” John Hughes movie is. The Breakfast Club, Sixteen Candles, Weird Science, Ferris Bueller’s Day Off, and Planes, Trains and Automobiles are pretty much all classics that he wrote and directed, but that doesn’t count the numerous others that he just wrote. When I heard John Hughes died, it was a sad day, even though he hadn’t directed a film since 1991’s Curly Sue. I think we all were kind of holding out hope he’d be able to step back behind the camera one more time. As for my favorite film from Hughes, it’s without a doubt Ferris Bueller’s Day Off.  This was a film for which I had a VHS copy I had that watched just about every time I was home sick from school or faking sick (this seemed to happen more often). The film is basically the cinematic equivalent to mac-n-cheese comfort food for me. I know I’m not in the minority when it comes to being able to quote this film at random, and perhaps I can possibly blame it for wanting to jump onto a parade float and serenade the masses with some classic tune. But the film does, oddly enough, hit me a little deeper than all that.

So for the reader who has stumbled across this love letter, I mean review, of the film, and is wondering just what the hell is so special about this film, well, it’s simple.  Ferris Bueller isn’t just a character; I’d say he’s the example by which we should all live our lives.  Not to do exactly as he does, but to live your life in the moment, to take chances, the cinematic embodiment of the term “carpe diem”.

The set up for the film is simple; Ferris Bueller (Matthew Broderick) is a senior in high school and decides to fake being sick so he can spend the day with his best friend Cameron (Alan Ruck) and his girlfriend Sloane (Mia Sara). There’s a bit of a side story going on where Principal Ed Rooney (Jeffrey Jones) doesn’t believe that Ferris is sick and he’s decided that he’s going to prove it no matter what it takes. Then there is also Ferris’ sister, Jeanie (Jennifer Grey), who knows her brother is playing sick and has had it with him always getting away with everything he does, so she’s out to get him as well.  Now I relatively feel that the movie is flawless. Rose colored glasses? I’m guilty as charged, but I can certainly recognize that despite having these antagonists wanting so desperately to thwart Ferris, it has no impact on him, because he has no idea what’s going on back at home. The “tension” is virtually only for the viewer’s sake. Though Alfred Hitchcock would discuss using this as a tension device for his audiences, it just doesn’t work out that way for this film.

In the film there are some moments where it does look as though Ferris could be caught, but if were to get caught, well, that would sort of steal some of the magic of this film and remove a bit of the fantasy aspect of it. For those who don’t realize this is a fantasy film, well, for starters there’s the “Save Ferris” sign on the water tower … Come on; nothing gets done that fast in the city no matter where you are …There there’s the fun blink-and-you-miss-it appearance of Louis Anderson as a flower delivery guy. We see him drop off flowers, but somehow later in the film there are a massive amount of flowers and balloons in the house; who brought them all in? Am I nitpicking? Nah, it’s just something I observed a long time ago and always wondered.

One of the things that I feel stands out most with this film is how well it handles breaking the fourth wall. Sure, Deadpool does it quite often, but Ferris Bueller’s Day Off I feel is the film for which audiences collectively recognize it and remember it being used the most. I like how Ferris brings us into his plan and expresses his thoughts, and the way the technique is used here it does cut out the need to have scenes developing the story or explaining characters. His insight gives us enough to follow along and to a point makes us the fifth wheel for this adventure. It’s no surprise that Matthew Broderick took off after this performance, and though he’s had several great roles over the years, for me he’ll always be Ferris. This was also the film that helped propel Alan Ruck’s career, though not quite to the same success as Broderick. Jean Grey we all know went on to be successful with Dirty Dancing. The one who shocks me in the cast who didn’t flourish as much is Mia Sara; she had Legend and Ferris Bueller’s Day Off back to back, but the last movie I genuinely remember seeing her in was the sci-fi action film Timecop. Behind the camera was budding cinematographer Tak Fujimoto, who would go on to be director of photography for Silence of the Lambs and several other great films.

The real magic behind the film is the script that John Hughes delivers. While Quentin Tarantino is well known for memorable dialog, Hughes has him beat simply because he’s able to squeeze in more heart in a line of dialog than most writers try to manage in an entire script. Ferris Bueller’s Day Off is heavy on the dialog and just happens to have a lot of beautifully shot locations. In this film we don’t see the protagonist, Ferris, go through a character arc; the real arc of the story belongs to Cameron as we get to see him blossom from being the uptight friend to the guy who’ll take a risk and stand up for himself. The more you watch the film, the more you get to accept that Cameron represents the audience and Ferris is like our guru to letting go and having fun. As for Ed Rooney, I see him as what happens when you want to be the killjoy to someone’s happiness or the consequence of not allowing yourself to just let things go. Jeanie could easily follow in the footsteps of Rooney and be punished for it, but oddly enough her interaction with Charlie Sheen’s character, a rebellious teen as well, gets her to take a chance and in doing so she finds happiness. Even the guys at the parking lot, they take a chance (a very illegal one, granted), but they end up having a great day as well.

“Life moves pretty fast. If you don’t stop and look around once in a while, you could miss it.”

Ferris Bueller’s Day Off is presented in the aspect ratio 2.39:1. The 1080p image is arrived at with an AVC MPEG-4 codec at an average of 32 mbps.  The entire film takes place during the daytime, and a good portion is exterior, so a good amount seems to depend on natural light or is even overly lit.  Everything is bright and colorful almost to capture the essence of Ferris and his day off. The colors pop, especially with Cameron’s hockey jersey.  The textures in the clothing come through with nice detail as well.  The skin tones seem a bit light, but nothing distracting. It’s a nice and polished transfer that looks good, especially for a standard comedy of the era.

The Dolby TrueHD 5.1 track is pretty standard for this kind of comedy. There are not a lot of moments to really showcase the Dolby track, that is until the scenes where the soundtrack takes over, i.e.: when we see the Ferrari the first time, the parade sequence, and of course the race home.  The dialog is clean throughout.  Even the overly exaggerated foley moments sound good.

Getting the Class Together: The Cast of Ferris Bueller’s Day Off: (27:45)  Many of the cast members return to discuss how they got their parts in the film and how it impacted their lives.

The Making of Ferris Bueller’s Day Off: (15:29)  Some behind-the-scenes footage and cast and crew discuss the making of the film.

Who is Ferris Bueller: (9:12) The cast discuss what makes Ferris so unique and likeable.

The World According to Ben Stein: (10:51) A little bit of Ben Stein giving his thoughts on the film and his experience with it.

Vintage Ferris Bueller: The Lost Tapes: (10:16) Here we get the key cast members having fun behind the scenes interviewing each other.

Like many of the films Hughes directed, this is quintessential Chicago; it’s a time capsule of what 1980’s Chicago was all about, or at least through the lens of how Hughes saw the Windy City. While Ferris Bueller’s Day Off may come across as just a simple fun teenage romp, to a certain degree I see it as feature-length travelogue of all the great places one should check out when visiting the city, and if one could acquire a Ferrari for the trip, even better.

Brent Lorentson is a horror writer and film critic based out of Tampa, Florida. With a BA in Digital Film, he co-wrote and co-directed Scavenger Hunt. His short stories have appeared in various horror anthologies. In 2019 his short script Fertile Blood will be a part of the anthology horror film Slumber Party. He is currently working on his first novel A Dark and Secret Place set to be released in late 2019. Favorite Films: Taxi Driver, Fight Club, I Saw the Devil, The Wild Bunch, Dawn of the Dead, A Clockwork Orange, Pulp Fiction, Heathers, The Monster Squad, and High Fidelity.
His Dark Materials Season 2 (Blu-ray) Black Widow