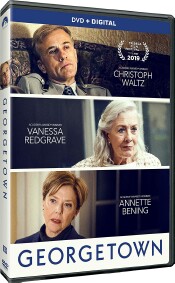 A story about a man so desperate to prove his importance and rub elbows with the elite that he’s willing to kill for the privilege. I can see why Christoph Waltz made this film his directorial debut. Of course, it is also great that he also chooses to act in it as well, because as this film proves, Waltz is not only a tremendous actor, but he is quite capable in as a director as well. Based on the New York Times Magazine article, “The Worst Marriage in Georgetown,” Waltz stars as Ulrich Mott, an ambitious social climber that is willing to go to great lengths to obtain the status that he believes himself deserving of.  Too bad nobody else seems to see him in the same light, that is until Vanessa Redgrave’s Elsa Brecht, his wife as well as his subsequent murder victim. Brecht, who is a quite a few years older than Mott, helps him to discover his confidence and thanks to her own standing in the political community, manages to put him in the orbit of several powerbrokers. That is until she realizes that she created a monster, a monster that would eventually lead to her downfall. Rounding out the cast is Annette Benning as Brecht’s daughter whose disapproving of the relationship and Corey Hawkins as Mott’s lawyer during the murder trial.

While the film is based off the true story of the murder of Viola Herms Drath, several aspects are altered for the sake of the film. Such as the names; Waltz’s character is Ulrich Mott rather than Albrecht Gero Muth, while Redgrave’s character is Elsa Brecht instead of Viola Herms Drath. Another notable change is the age difference, as the real Muth was 44 years Drath’s junior, making him 26 at the time of their marriage. The story develops in an intriguing fashion, being broken up into several sections that essentially each tell a specific portion of the events that lead to the murder. Each section is intercut between flashback sequences and the story as it unfolds in real time. This manner of storytelling was very enjoyable because each portion felt self-contained while still feeding into the overarching plot and showing a clear descent into tragedy.

The Mott character is the central focus of the film. A majority of Redgrave’s character performance is delivered in flashback. Though these sequences we see the development of the relationship between the two. Early on the power dynamic is clearly in Brecht’s favor, as Mott is like a eager puppy, hanging on her every word and catering to her every need. Redgrave goes as far as to comment about him being the perfect butler. The Brecht character seems to know from the very beginning that Mott is a charlatan; his claims about his accomplishments nothing more than fantasies that he’s built up in her head. It is only with her assistance that he manages to have any measure of success, even so it is a bit of bumpy road for him both professionally, as well as personally as the two’s relationship is not without its complications. My familiarity with the true crime story is limited, but the events of the film play out in such a realistic fashion that I’d have no trouble believing that this was the way things transpired.

In regards to the performances, this is a Waltz production, pure and simple. His character is the central focus of the film. For that position, you require someone with a commanding presence that can keep the audience engaged. This is something that Waltz has been doing since Inglorious Basterds and Georgetown is no different. He perfectly balances the different aspects of the character’s personality; from his delusion of grandeur, his desperation to elevate his social status, his manipulation, to his smugness and contempt during the murder trial. The other character’s performances were great, but at best they can be describe as the supporting cast, as with the exception of Redgrave their roles are minor. When it comes to Redgrave, she holds her own, especially early on before the power dynamic shift. However, her best moment comes in her final scene, where she shows resolve and a willingness to take a match to everything that the couple’s built, that makes her performance notable.

Speaking to the lengths that Waltz’s character goes to in order to raise up the social ladder, I must confess to being really impressed with cleverness of the plan. The two-year endeavor that for all intents and purposes appeared to have paid off. His character was a charlatan, but he was a first-rate charlatan without a doubt.

Simply put, Georgetown is a solid directorial debut for Waltz and I’m sure that this will not be his last foray into the director’s chair. This film shows that he has some affinity for it and proves his ability to tell a quality story. I look forward to the next film that he directs.

Jeremy Butler is a film school graduate of the International Academy of Design and Technology. He is been writing for Upcomingdiscs since 2012; however, movies have played a big part of his life for much longer. Favorite genres include horror, science fiction/fantasy, and comedy. Favorite movies are V for Vendetta, Boondocks Saints, Kiss Kiss Bang Bang, and The Godfather.
Wildcat Paramount Presents: 48 Hrs. (Blu-ray)