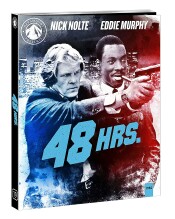 In 1982 when production was getting started on 48 Hrs, Walter Hill had plenty pf success with The Warriors, The Long Riders, and Southern Comfort, and many would think he was taking a bit of a risk by casting Eddie Murphy as the second lead of his film. Sure, Murphy would go on to be a giant success, but at the time of this film all he had was being a cast member of SNL. The gamble would of course be a success for not just Walter Hill and the film, but 48 Hrs would be the film that lit the fuse to a successful career that would launch Eddie Murphy into superstardom. The movie is a classic for more than just making a career for Eddie Murphy; it’s also the movie that remolded what the “buddy action” film can be by having the leads at one another’s throats while the bullets and fists fly. While this isn’t my favorite Walter Hill film (that number one slot will always be The Warriors), 48 Hrs. is a staple film of his career that I feel is required viewing for those who love 80s action films, or simply good films, period.

The film opens up with a fun “jail break”, Ganz (James Remar) is working a chain gang when his partner Billy Bear (Sonny Landham) comes to break him free. The big plan is for the two to make it to San Francisco, where they want to collect money that’s owed from a deal that went wrong, and then they will live happily on the lam.While these two may not be the smartest of criminals, they definitely rank pretty high when it comes to being vicious and lacking a moral compass when it comes to who they put a bullet into.  It’s the trail of bodies that gets Jack Cates (Nick Nolte) onto the case, especially when cops end up dead and Ganz nearly kills Cates with his own pistol.

With leads running out, Cates has to go meet with a Reggie Hammond (Eddie Murphy), a convict who has ties to Ganz.  The pair strike up a deal, both having their reasons to take down Ganz, and as part of the deal Hammond will get a 48-hour leave from the prison.  From the moment Murphy comes on screen, doing his rendition of “Roxanne” by Sting, Murphy pretty much steals just about every moment he’s in. What’s somewhat incredible is how well Nolte and Murphy work together and play off one another. For characters who are supposed to hate each other, the chemistry just works with these two. The racist banter between the two is something that would most likely make “woke” audiences cringe these days, but it’s an integral part of what makes these two not only tick but help each other. The way Nolte plays the role, it’s difficult to tell if Cates is just a jerk, a racist, or just has a way of getting under people’s skin to get results. This gets somewhat addressed later in the film, but it’s just ambiguous enough to allow the audience to draw their own conclusion on the character.

The cast of bad guys in this film is impressive. James Remar may be best known as Harry Morgan in Dexter, but he had a pretty solid career in the late 80’s into the 90’s playing some fun characters. Then there is Sonny Landham, who was a regular in Walter Hill films, but I’d wager is best known for his role as Billy in Predator. Then there is David Patrick Kelly, who also has an impressive resume, but is an icon in my eyes for his role in The Warriors and uttering the infamous line “Warriors, come out to play.” In a lot of ways Dean Patrick Kelly may have been the most recognizable of the trio at the time, but it’s safe to say that 48 Hrs. was a helpful push for these guys.

The script for this film is top-notch as well: Larry Gross (Streets of Fire), Roger Spottiswoode (went on to direct Turner and Hooch and the underappreciated Shoot To Kill and numerous other films, one of which was the love-it-or-hate-it James Bond film Tomorrow Never Dies}, Steven E. de Souza who has another laundry list of action flicks like Die Hard and Commando along with numerous others. That’s mot even including the contributions made by Walter Hill. I mean, this film with stacked with talented action filmmakers. When looking back on it, this is like the dream team of writers to throw together. Nowadays a studio throws together a group of highly paid writers and the result is a bland, lackluster film.

The mix of comedy and action is done so well, and it’s because of Walter Hill’s talent that the film toes the line so well; it can be taken seriously and reach a broad audience.  I’m glad Paramount dusted off this print and gave it a nice Blu-ray. This is a film I hope will find its way in front of new audiences that can appreciate it for what it is. It’s crude, it’s violent, but damn, the movie is a lot of funTo this day people are trying to imitate the chemistry and style of this film even though they may not even realize it. This truly is a groundbreaking film, and while it didn’t win awards, it still scored at the box office and made me a fan when I scored this as a rental with the first Beverly Hills Cop.

48 Hrs. is presented in the aspect ratio 1.85:1. The 1080p image is arrived at with an AVC MPEG-4 codec at an average of 34 mbps. I really appreciate the look of this film, and the fact that it was shot on 35 MM allows for the transfer to just continue to look sharp and not lose any of its original elements. I love the visual style; it has a smoky noir back alley look that just sets a tone. Seeing San Francisco in all its grime just makes the film and the situation for the characters feel more dangerous. The textures come through nicely, most noticeably with the suit Eddie Murphy is in during the film. The use of the long-angle lenses is all the more effective.

The 5.1 Dolby TrueHD track is great here. The solid mix of James Horner’s score along with sharp dialog exchanges, and then you factor in the shootouts; the upgrade from the original mono mix to 5.1 does allow for a more immersive experience. The shootouts are big, loud, and somewhat over-the-top, but the mix is done well, so you won’t feel the need to adjust your volume settings.

Director Walter Hill on 48 Hrs.- (19:08) Walter Hill gives plenty of insight in how the film came together and about the casting of Eddie Murphy.

Space Kid (original 1966 Animated short): (5:31) We get the full animated segment that Ganz was watching in the hotel room.

For me this film is a classic. Before Eddie Murphy was doing Dolittle films and voicing a donkey, he was one of my favorite actors. I miss the old Eddie Murphy. Heck, rewatching this made me nostalgic for the way films used to be. This is the perfect popcorn flick that I feel works no matter when you watch it and holds up after several viewings.  If you haven’t seen it, what are you waiting for?

Brent Lorentson is a horror writer and film critic based out of Tampa, Florida. With a BA in Digital Film, he co-wrote and co-directed Scavenger Hunt. His short stories have appeared in various horror anthologies. In 2019 his short script Fertile Blood will be a part of the anthology horror film Slumber Party. He is currently working on his first novel A Dark and Secret Place set to be released in late 2019. Favorite Films: Taxi Driver, Fight Club, I Saw the Devil, The Wild Bunch, Dawn of the Dead, A Clockwork Orange, Pulp Fiction, Heathers, The Monster Squad, and High Fidelity.
Georgetown Paramount Presents: Another 48 Hrs. (Blu-ray)