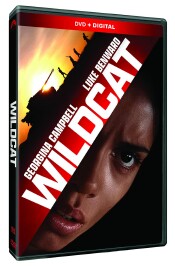 I like it when films limit themselves to one or two locations. I feel like it puts more emphasis on the acting. Of course when you limit yourself in such a fashion, it is important that the acting is of great quality. Thankfully, the actors of Wildcat are up to the task and deliver sound performances, especially lead actress Georgina Campbell of Krypton fame. Wildcat is a psychological thriller that follows Khadija Young (Campbell), an ambitious journalist stationed in the Middle East who is taken captive after her convoy is ambushed. With her and a young marine the only survivors of the convoy attacked, they find themselves at the mercy of militants led by a cold and calculating leader. The film does not shy away from the ugliness of captivity, establishing the use of torture against enemy combatants from the very first scene. Our protagonist finds herself locked away in a secure room, and the first thing that happens is that her captors remove one of her fingernails. That’s how the film opened up, so you could only imagine what other horrors she was forced to face. However, the trauma is not only of the body, but of the psyche.

This is where I must give praise to Campbell, because her panic is palpable. She really played up the weak and meager aspect. Initially, I was bothered by this, because I thought this would be the bulk of her performance; fear and despair, and there is only so much of that you can watch before you get desensitized. But then something happened; as the leader is probing her for information and accusing her of being a spy, she in a sense turns the tables on him. Not only does she show hidden depths, but she basically tells him that she knows exactly who he is and what he’s done. Granted, this essentially ruins her ability to claim that she is nothing more than a journalist; this scene carried weight because for a brief moment, we saw the power dynamic shift from the captor to the captive. Having this scene take place from the offset, adding depth and intrigue to the film. It actually made me sit up and pay attention more intently, because now I was really intrigued. Because it became clear that there was more to the Khadija Young character than meets the eye. That is something I love to see, for a character to show hidden depths and for the perceived weakling to show previously unknown strength.

As the film goes on, we see more of the ugly side of torture and her captivity, and I felt for the character, because one inherent fact is no matter how strong you are, every person has their breaking point, and we do see hers around the midpoint, when she reveals secrets about herself that were only merely hinted at up until this point. Even so, she continues to show a resolve that outpaces her costar, who is playing a trained marine. Around this time is where the film explores the different types of torture that exist. Specifically, there are two ways to break a person: by physically hurting them or by hurting someone they care about. I found this a great addition to the film, because it speaks to universal truths that I’m very aware of. Some people can take the pain, but when being forced to listen to someone they care about in agony, they’ll do anything to make that person’s pain stop. The inclusion of this principle in the film grounded it in reality for me.

I can’t say enough about Campbell’s performance in the film. What’s ironic is I spent the first few scenes wondering where I knew her from, and then it hit me around the time that she showed her character’s hidden strength: Krypton. She was Lyta-Zod in the gone-far-too-soon Sci-Fi series. It was great to see her land on her feet following the series’ cancellation, and given her performance here, I expect many more roles to follow. While the film’s cast was small, I would be remiss if I didn’t at least address Mido Hamada (from the Veronica Mars Hulu revival) as Abu Khalid, Khadija’s captor. Hamada brings both a softness as well as a certain ruthlessness to the character. He is perfectly fine with Campbell’s torture, but he also provides comfort  when necessary, thereby upping the psychological factor of the film. He has an agenda, but he also appears to take a personal interest in his captive, going so far as to ask her questions about her life outside the scope of mission. This goes a long way towards establishing a connection between the characters despite them being on opposing sides. They parry off one another so well that their cat-and-mouse game takes on appearance of a chess game.

Wildcat was definitely a film that took me by surprise. I hadn’t expected such a quality story with superior acting. It just shows that the best films can come from the most unlikely of places. I wholeheartedly believe that fans of psychological thrillers will find this film quite enjoyable. It is clever and does not shy away from the harsh realities of captivity, all while showing a grudging respect between captor and captive.

Jeremy Butler is a film school graduate of the International Academy of Design and Technology. He is been writing for Upcomingdiscs since 2012; however, movies have played a big part of his life for much longer. Favorite genres include horror, science fiction/fantasy, and comedy. Favorite movies are V for Vendetta, Boondocks Saints, Kiss Kiss Bang Bang, and The Godfather.
Beate Georgetown