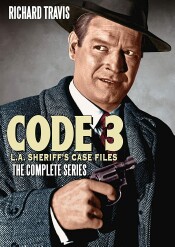 “Friends, The Los Angeles County Sheriff’s Office Department are pleased to cooperate in the production of Code 3 in the interest of crime prevention and rehabilitation. During the production of the Code 3 films a deputy sheriff is present at all times to assure you of the authenticity in our stories.”

That was the postscript offered by L.A. County Sheriff Eugene W. Biscailuz at the end of each of the 39 half-our episodes of Hal Roach, Jr.’s Code 3. The series only lasted a season and has become somewhat of an obscure production that wasn’t even mentioned in several early publications of books dedicated to prime time history. I have to say I had never heard of it before it was offered for review. One of the joys of this job is the ability to discover vintage shows that have escaped my, and pretty much everyone alive today’s notice. A little series vintage television buffs and fans of police dramas will find interesting. It was almost like COPS, but 40 years earlier.

Today there are often police officers and departments acting as technical advisors to films and television shows. But this was a pretty rare thing in those days and set an example for future shows. Code 3, while obscure, actually broke the ground for those kind of arrangements. Sheriff Biscailuz was also a renowned name in law enforcement. Decades before he was elected as L.A. County Sheriff, he was responsible for founding the California Highway Patrol and was its first commander. Those guys ended up being made famous in CHiPs, starring Erik Estrada.

There was no regular cast on this series. The closest to a starring role would be that of Richard Travis, who played Assistant Sheriff Roger Barrett. He was the only actor in every episode, but he was only briefly seen as the person who introduced each episode, much like Alfred Hitchcock or Rod Serling would have done, but Travis remained in character and sat at his desk. After the one- or two-minute introduction, he would not be part of the story, only to return for a short wrap-up of the events of the story and a usual strong warning of the dangers and risks of criminal activity. He would then introduce Sheriff Biscailuz, who would deliver much of the same recorded tag.

There were a few actors and characters who would return for multiple episodes, but not many, never more than three or four episodes. The most notable here was Robert Armstrong, who everyone remembers as Carl Denham, the huckster/producer who brings Fay Wray and the gang to Skull Island to meet King Kong. He’s older here, but retains a lot of the charm that makes that movie such a classic. Of course, give some credit to Willis O’Brien and a certain larger-than-life gorilla. He’d repeat the act in Son Of Kong, and a different character, but same guy in Mighty Joe Young.

The series had some notable directors as well, with George WaGGner ( yeah that’s how he liked to have it printed) being the most prolific. He’s best known for directing Lon Chaney, Jr. in The Wolf Man. Others know him as the director of many of the camp Batman episodes of the 1960’s.

The series was basically an anthology, and while the titular Code 3 means emergency and full lights and sirens, that was rarely a part of the show. The episodes took place from various Sheriff stations in L.A. County and features crimes as diverse as kidnapping, murder, extortion, robbery, and escaped prisoners. Stories didn’t always even focus on a crime. Missing children figured into a couple of episodes, and there were quite a few episodes dedicated to fleeing people who were actually innocent of the crime. Episodes tackled the department’s outreach to stem juvenile delinquency and highlighted heroes in train yards and the fire department. With only 26 minutes to tell a story, things get resolved rather quickly, but that doesn’t mean there wasn’t time to set up a few suspenseful moments. Of course, the focus was often on the deputies who worked the cases, but the show wasn’t shy about exposing corruption within the department. They had the full cooperation of the Sheriff’s Office, and so you have to expect that the stories are often slanted and the crime-prevention messages date the show quite severely.

Still, there are some good stories here, and they used a pretty solid cast across the board. You get all 39 episodes of the series in about as good a quality as is likely possible on three discs. There are no extras to be found here. This is a lot of fun for guys like me. I would likely have never encountered shows like this without reviewing titles for you here. This one turned out to be pretty good. “Sometimes the result of our efforts turn out to be unhappy.”

Gino Sassani is a member of the Southeastern Film Critic's Association (SEFCA). He is a film and television critic based in Tampa, Florida. He's also the Senior Editor here at Upcomingdiscs. Gino started reviewing films in the early 1990's as a segment of his local television show Focus. He's an award-winning recording artist for Omega Records. Gino is currently working on his 8th album Merchants & Mercenaries. Gino took over Upcomingdiscs Dec 1, 2008. He works out of a home theater he calls The Reel World. Favorite films: The Godfather, The Godfather Part II, The Body Snatcher (Val Lewton film with Karloff and Lugosi, not the pod people film), Unforgiven, Gladiator, The Lion King, Jaws, Son Of Frankenstein, The Good, The Bad And The Ugly, and Monsters, Inc.
Paramount Presents: Another 48 Hrs. (Blu-ray) Mortal Kombat (UHD Blu-ray) (4K)