Posted in: Disc Reviews by Brent Lorentson on July 20th, 2021 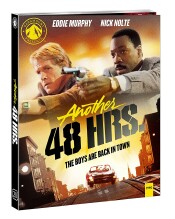 Bigger doesn’t always mean better. Eight years following the success of the first 48 Hrs film and the rise of Eddie Murphy’s stardom, Murphy came to the studio proposing to do a sequel, and they happily obliged him, allowing him to also produce it under his budding production company. Walter Hill had gone on to direct some successful films, but nothing like the box office success of 48 Hrs. Brewster’s Millions, Streets of Fire, and Red Heat are just of few of the films that stood out during this time for Hill, but the potential of another big moneymaker that could give him the clout to go on and direct more of the films that he wanted was the draw he needed. It was a paycheck movie that could have had potential, but with a rumored 30 minutes cut from the film just before its release on top of the 20-plus minutes cut down from the first cut followed by a rushed script to get the film into production, well, it’s no surprise that the film falls short of the first film.

This time around Jack Cates (Nick Nolte) is after this elusive criminal he’s dubbed “The Iceman”. He’s working on a theory that has this elusive criminal connected into some high-stakes drug deals. Unfortunately he has no proof this guy even exists. Just when he thinks he’s close, one of his cases points him into the direction of his old buddy Reggie Hammond (Eddie Murphy), who is recently a free man. Reggie happens to have a target on his back with Ganz’s brother, Cherry (Andrew Divoff), who is out for revenge and also Reggie’s money. Cates is also feeling the heat from an Internal Affairs officer played by the recognizable Kevin Tighe. The setup for the film isn’t bad; honestly, the film had some good potential, but everything just falls apart.

One of the best moments of the film revolves around Reggie on the prisoner bus while Cherry, one of his biker buddies, attacks it while trying to take out Reggie. The stunt with the prison bus is pretty impressive. In the time before CGI and having a guy really behind the wheel, well, it definitely is a highlight of the film. Another highlight is the setup of the opening sequence with the bikers meeting up at a bar that turns into bullet mayhem.  It really gave the film hope that this could be like a modern western with biker hell-raisers and fun shootouts, but it just doesn’t quite reach its potential. Everything seems bigger this time around. Even the impact of the bullets seems to be stronger, knocking people back ten feet and flinging them through windows. Sure, over-the-top action is kind of a Walter Hill staple, but it just doesn’t fit in comparison to the first film.

The most frustrating aspect of the film is its lack of originality. While it hadn’t even been 10 years between the films, numerous films had been made during that time that capitalized on the idea of bickering partners trying to solve a crime or simply having R-rated action films loaded with humor. The jokes just don’t land as well hereand even worse, the film does so many callbacks to the first that you can’t help but wonder if the writers had anything to even offer the sequel. Even some of the story beats are so similar that it’s as though they hope you don’t realize they are copying themselves and hope the audience won’t notice. Then there is the idea of “The Iceman”. While this element in concept was a good start as things unfold and the identity of who “the Iceman” is, the reveal is so absurd it doesn’t make any sense. Then there is the entertaining bit with Reggie’s gun in the final shootout and the number of bullets it can fire.

Another 48 Hrs would signal the decline in Murphy’s box office draw, Beverly Hills Cop 3 would signal the end of an era for the foul-mouthed king of comedy … until he’d reinvent himself into the family-comedy guy and reach another peak in his career. There was a time where I wished we could have gotten a third film, if the studio could hire Shane Black to do the script and have Cates as a retired PI and have Reggie coming to Cates for help for one final ride with Hill behind the camera. With so many revivals happening these days, who knows?

Another 48 Hrs. is presented in the aspect ratio 1.85:1. The 1080p image is arrived at with an AVC MPEG-4 codec at an average of 35 mbps. The film loses a bit of its grit that the first film had; this one seems more polished.  There is still a lot of detail captured in the suits, but some of the best looking material is in the film’s opening sequence with the bikers. We can also see more of the frown lines that developed between the two films on Nick Nolte’s stoic mug; the film does look good at least.

The 5.1 Dolby TrueHD track is great here just like the first film. The solid mix of James Horner’s score along with sharp dialog exchanges along with the shootouts and rumbles of the motorcycles all sound good. The bass does seem to get a little more use in this film for more rumble action, but overall it’s a good quality mix, and what you’d expect from an action film from the era.

Director Walter Hill on  Another 48 Hrs.- (14:35) Walter Hill gets into what got the sequel made and his reluctance to do the film. Unfortunately he doesn’t get into the rumored 50 minutes cut from the film.

I wouldn’t say I hate the film; I like it, but it’s definitely forgettable when measured up against the original. While Murphy and Nolte together are still fun to watch, it just doesn’t have the same magic of the first film.

Brent Lorentson is a horror writer and film critic based out of Tampa, Florida. With a BA in Digital Film, he co-wrote and co-directed Scavenger Hunt. His short stories have appeared in various horror anthologies. In 2019 his short script Fertile Blood will be a part of the anthology horror film Slumber Party. He is currently working on his first novel A Dark and Secret Place set to be released in late 2019. Favorite Films: Taxi Driver, Fight Club, I Saw the Devil, The Wild Bunch, Dawn of the Dead, A Clockwork Orange, Pulp Fiction, Heathers, The Monster Squad, and High Fidelity.
Paramount Presents: 48 Hrs. (Blu-ray) Code 3: The Complete Series