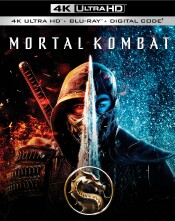 “Throughout history, different cultures all over the world reference a great tournament of champions. That dragon marking, I think it’s an invitation to fight for something known as Mortal Kombat.”

While I do rate this adaptation of the popular video game better than its incarnations that came before it in the 90s, I still wouldn’t categorize it as a great movie. It’s a bit too short on explanation to reach that level. It starts off promising with a showdown battle between the two most popular characters of the game, played by Joe Taslim (Sub-Zero) and Hiroyuki Sanada (Scorpion). The fight is everything that I expected it to be; well-orchestrated with the right amount of bloodshed. However, as the story goes on, the quality of the storytelling takes a hit as the film takes the position that the audience is already well-versed in the backstory of the film. For me, this seemed liked the wrong approach to take, especially if you are trying to attract a younger generation to the series. We have to remember that Mortal Kombat is based off a video game series that is nearly thirty years old. Granted, it has seen much revamping over the proceeding years that has kept the series current, but even so, a voiceover explaining the backstory of the tournament would have gone a long way. We get a title card that offer some details, but it’s not enough.

Also, there is the issue that given the stance the film takes in reference to assuming the audience is familiar with the backstory, why would they make a character that is not canon the focal point of the film? That is not to take away from Lewis Tan’s Cole Young, but merely to highlight that introducing this brand-new character will most likely confuse and alienate the die-hard fans. I spent the first part of the film trying to figure out why I didn’t recognize this character until I got out my phone (which was OK, because I was observing the phone at home), and realized that he was new character created for this telling. Something like this would work with newcomers, but as I said, die-hards will most likely take exception to this. I’d be lying if I said I was not at least slightly bothered by this.

Once I got past my initial agitation, I was able to enjoy some aspects of the film, particularly the fight scenes. This is most likely the movie’s biggest triumphs, as they are beautifully executed. A particularly good one was the battle between Jax (Supergirl’s Mechad Brooks) and Sub-Zero. While it was essentially known from the offset that there was only one way for the fight to go, it is not a one-side affair, as Brooks does manage to hold his own for a bit. He even gets a fairly decent one-liner. Then there was Jessica McNamee’s introduction as Sonya Blade. Now, her character is the underdog for the film in my eyes, even more so than Tan’s Cole Young. I won’t go into too much detail, but let’s just say that from this character’s perspective, Mortal Kombat is a man’s game. Despite this, this character was instrumental to the good aspects of the film in my eyes. I’ve been an admirer of McNamee dating back to her stint on the far-too-short-lived USA Network series Sirens, and in that series, like here, her presence was vital. She got down with the action just as much as her counterparts, not to mention providing a good share of the quips, as well as serving as unofficial narrator for what little backstory we receive about the tournament. Without her, my rating for this film would be significantly lower.

This brings us to my next gripe with the film: the nature of arcana.  In a nutshell, arcana is each character’s special power. A good chunk of the film is dedicated to each character discovering their own arcana. For some it comes rather quickly, but for a majority of the cast, discovering their gifts is a journey that requires self-discovery. This films too much like reinventing the wheel for me. It even goes as far as altering the origins for some characters, but the most difficult one to swallow was Cole Young’s. As a completely new character, there was no source material to stomp on for his arcana. Even without this, it was as if no thought or effort was put into special ability. I just remember being extremely disappointed when we finally get a look at his special talent. You go thought the trouble of creating a new character; the least you could do was give him a kick-ass power.

Now let’s talk about the character that I’m sure everyone was most excited to see. Or perhaps that was just me. Scorpion. This is the character that all the promotional material has been dedicated to showcasing. Given the film’s opening sequence, the manner in which this character would be introduced was going to be a real head-scratcher. Now after seeing how they brought the character in, I’m still scratching my head. This had to be the most complicated way to execute this. The animated film dedicated to the character had an more easily digestible way of accomplishing this. Here, it just feels rushed and overly complex.  I can sum it up in one word: “Huh?”

Mortal Kombat is presented in its original aspect ratio of 2.39:1 The ultra-high-definition image presentation is arrived at with an HEVC codec at an average of 60-65 mbps. This is a rare native 4K movie, so it really benefits from the UHD treatment. The film actually leans into the HDR strengths, not so much in color but in various degrees of contrast and lighting. There’s a rather nice other-worldly tone happening here that is just an extra level of expansion from a Blu-ray high-definition release. Textures come through mostly in costumes but also in some of the environments. While the CGI looks a bit too obvious here, the coal mine exterior delivers a wonderfully detailed environment, to be sure. Some of the bolder and more vivid color presentation comes from sources like lightning f/x and some embers both in environments and powers. The fire stuff is often quite a bit obvious when it’s CG, and much more captivating when it’s practical. Black levels are pretty deep, but there are a lot of moments when stylistic choices allow detail to get lost in the shadows.

The Atmos track defaults to a really solid 7.1 mix. The surrounds can certainly get pretty busy and there is absolutely some sweet ear candy to enjoy here. The environments provide a ton of spacial material, and it can often be quite immersive. The subs have their moments and rock the world when appropriate. I was disappointed in the dialog mix here. I ended up having to activate some captions to understand what was being said. The score gets mixed far too loudly here, and I really dislike having to hold my volume control throughout a film. The captions were a simpler solution but should never be necessary … unless Tom Hardy happens to be involved, which is not the case here.

Deleted Scenes: (4:13) There are four with a handy play-all option. The f/x are in various stages of completion.

From Game To Screen – The Making Of Mortal Kombat: (21:30) This pretty much covers every aspect of the production. It starts with the cast talking about their own childhood experiences with various versions of the game. After all that looking back we get into those aspects of the film that might be of interest. The areas covered include: sets, production design, conceptual art, pre-viz, motion capture, locations, character and creature designs, and a ton of behind-the-scenes looks at the practical f/x.

Fan Favorite Characters: (16:51) You get a brief look at 11 characters with no individual selection.

Fight Koreography: (9:04) A behind-the-scenes look at fights and stunts.

Into The Krypt – Easter Eggs Of Mortal Kombat: (4:11) A look at some of the shout-outs to the game franchise fans.

Anatomy Of A Scene: (11:57) This is a breakdown of seven key scenes with a handy play-all option.

As previously stated, while the film is better than the 90’s version and its subsequent sequel, it is a far cry from a success as far as I’m concerned. It has some good elements to it, but overly complicated story arcs and lack of backstory take away from any good elements. Plus, for a movie about an epic tournament for the fate of mankind, more of the film is dedicated to building up to the tournament than the actual tournament itself. I compare it to the last season of Game of Thrones, where the Winter War was over in an episode. That is a perfect analogy for the Mortal Kombat tournament.

Jeremy Butler is a film school graduate of the International Academy of Design and Technology. He is been writing for Upcomingdiscs since 2012; however, movies have played a big part of his life for much longer. Favorite genres include horror, science fiction/fantasy, and comedy. Favorite movies are V for Vendetta, Boondocks Saints, Kiss Kiss Bang Bang, and The Godfather.
Code 3: The Complete Series Almost Famous (Steelbook) (UHD Blu-ray) (4K)