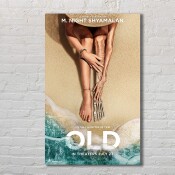 I guess you could say I have a bit of a love/hate relationship with M. Night Shyamalan movies. There are some that I really enjoy (i.e. The Sixth Sense, The Village, The Unbreakable Trilogy) and then there are those I’m just not fond of (i.e. The Last Airbender, After Earth, The Happening). When it comes to his new film, Old, I have a bit of a love/hate relationship with the film. There are several elements that I enjoyed, such as the premise, certain characters and their actors’ performances, but then in some instances the story felt underdeveloped, and certain actors were typecast. All in all, as the credits rolled I found myself with mixed feelings about what I’d just seen, and now with time to reflect, I’m still not a hundred percent sure how I feel about the film.

Let’s start with the elements that I enjoyed, such as the film’s premise. Several people get trapped on a beach where time appears to be accelerated, essentially making thirty minutes on the beach the equivalent of one year of their life. This a very intriguing undertaking that is full of suspense, as it ups the pressure to escape, as there is literally no telling which second could be your last. However, I did not feel that the severity of the situation was adequately addressed early on. The group comes to understand their situation quite quickly, but they are more wrapped up in their own personal issues than they are in figuring out a way to escape. Granted, there is a force that is preventing them from escaping, but I don’t feel that we got a good explanation as to what that force is. I feel that some time should have been devoted to that rather than all the individual storylines.

That brings me to character development. On the one hand, there are several characters who don’t really serve an overall purpose to the story, such as the character of Mid-size Sedan, the rapper that at first I expected to have some type of sage wisdom about the overall situation or at least be anything other than a red herring. To my mind his character just doesn’t make any kind of sense. He’s been on the beach the longest, and yet he’s more clueless about what was going on than anyone. Prior to the others arrival, he didn’t try to leave once? This idea is difficult to swallow, especially given the fact that he was dealing with a medical issue. He does produce one funny line that speaks to the age-old saying of “black don’t crack”, but outside this one-liner (which I want to believe was ad-libbed), his presence serves no real purpose. Another character that I’m not sure had any real purpose was the shallow doctor’s wife. As far as I saw, she makes no real impact on the film, and the story would more or less be the same whether she was there or not. So why even have the character in it?

Then there is Rufus Sewell’s character, who is arrogant and condescending from the start. This speaks to the typecast I spoke of earlier. Sewell has essentially made a career out of being the guy that the audience is meant to dislike. At this point, it is starting to border on cliché. I’m not taking away from Sewell as an actor, because he has done many things that I’ve enjoyed, but I think I would have been more caught off guard by his character’s personality if it came from someone who isn’t used to being the bad guy.

The film does have some, what I assume were unintended, funny moments. However, those are too few and far between to have any real resonance. What I would have liked to have seen is more time focused on the Gael Garcia Bernal and Vicky Krieps characters. They are without question the central focus of the film, but we don’t get enough interaction with them to make their struggle resonate with us, or least I didn’t. I would have like there to have been more backstory on the couple and their family. We get the sense early on that there is something significant going on between the couple, but by the time we figure out what it is, I’m not sure which reveal was bigger strain on their relationship. I wish I would say more, but then I’d be giving away the film’s twist, and we can’t have that.

So to put it simply; there were some things that I liked, and there were some parts that needed to be fleshed out more so that they had greater impact. There were some characters who were well-developed, such as the kids even though we had to be ready for several different actors in the same role, but then were others that the story would have more or less been the same without them. In summation, I liked it, but I didn’t love it.

Jeremy Butler is a film school graduate of the International Academy of Design and Technology. He is been writing for Upcomingdiscs since 2012; however, movies have played a big part of his life for much longer. Favorite genres include horror, science fiction/fantasy, and comedy. Favorite movies are V for Vendetta, Boondocks Saints, Kiss Kiss Bang Bang, and The Godfather.
Almost Famous (Steelbook) (UHD Blu-ray) (4K) Pennyworth: The Complete 2nd Season (Blu-ray)