Posted in: Disc Reviews by Brent Lorentson on July 25th, 2021 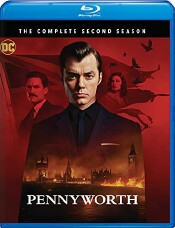 It continues to amaze me how well Warner Brothers does with their DC products in the television universe but manage to execute so poorly with their films.  Despite being a bit formulaic, the CW DC shows are still a blast to watch but it’s the more adult oriented shows Titans, Doom Patrol and Swamp Thing that have left me most impressed.  Now they have released Pennyworth for the Starz Network, despite the confidence I have in the other shows I went into this one with cautious optimism.  The biggest question that bothered me was do we need another series that delves into the Batman universe? Gotham recently wrapped up, there’s a Batwoman series, Joker was only 2 years ago and a new Batman film coming next year, not to forget all the other incarnations of the Dark Knight. What had me interested though is the notion of finally getting to see Alfred Pennyworth as the former SAS officer in his prime and the chance to see how he became entangled with the Wayne family.  Was the series a letdown or yet another success for the DC television universe?

The series was brought to life by Bruno Heller, a writer with experience in this universe since coming off from writing for Gotham.  Now if you’re thinking you enjoyed Gotham and perhaps this is a prequel you can enjoy with the kids let me stop you for a moment and say, this one is not for the kids.  This series embraces its adult content with its over the top violence, an abundance of sex, drugs and profanity that more closely resembles a Quentin Tarantino film than a comic book series, and I love it for that. Season one was a fun little romp that sets up the story of how Thomas Wayne, Martha Kane and Alfred Pennyworth all met.  Season 2 delves deeper into the development of their friendships and relationships and in the process shows how Lucius Fox was brought into the fold.  This is all done while a battle is taking place between London and the Raven Union which is led by Lord Harwood (Jason Flemyng) whom we met in the first season.  Season two, while it does continue the story I’m a little disappointed with the direction it goes with this so much focus on a war and take over by the Raven Union, my disappointment is with how little most of it doesn’t involve Alfred at all.

Jack Bannon continues to do great work in his portrayal of Alfred Pennyworth but season 2 does delve deeper into his character. While season 1 was about showing him becoming a resourceful self-made man after leaving the military behind and starting his security firm this season is about him suffering the consequences of his actions.  Following his father’s death to compound upon his guilt one of his ex-military friends is killed and the blame rests heavily on Alfie’s shoulders.  We see Alfie make a a lot of mistakes this season and watch as he goes down a self destructive path and how everyone around him suffers the consequences of his actions.  There even comes a point in the show where I simply stopped liking the character because of some of his actions, seeing a heroes fall from grace like this was a brave move by the writers and I commend them for this, by creating this flawed character it does humanize him and it creates some great potential for seeing this character have a more dramatic arc on their journey to redemption.

Then there is of course Thomas Wayne (Ben Aldridge) and Martha Kane (Emma Paetz) the eventual parents of Bruce Wayne.  Season 2 brings these characters back but on different sides of the warfront. Thomas, as a liaison with the CIA is playing a hands off approach and while being at the aid of the Queen and her officers his services as advisory only, wanting to keep the US out of matters.  Martha on the other hand is willing to work the front lines while also being a diplomat wanting to protect the country from the Raven Union at all costs.  The inevitable relationship with Thomas and Martha can be a bit frustrating at times to watch, the writers seems to want to dangle the drama of a “will they or wont they”, scenario of them getting together.  Why they want to be coy about this is frustrating because we know they’ll have Bruce.

The big bad for this season is Colonel John Salt (Edward Hogg) he’s very much the mad scientist type that seems similar to many of the Russian and Nazi scientists that were creating weapons to use against prisoners and of the mass destruction variety.  Seeing his rise of villainy under Lord Harwood is a bit disappointing, sure we see how Salt is influencing Harwood and even medicating him  but it’s just hard to accept that Harwood would entrust so much faith in this guy over all his trusted friends after all we saw him go through with them in season 1.  The big weapon Salt has been working on is called Storm Cloud, a project where Lucius Fox (Simon Manyonda) has been looking into.  Bringing Fox into the fold and him being an asset to the CIA and connecting him with Thomas Wayne is again a high point of the season for me and when Fox and Alfred first meet, well it’s a fun moment.

As for Alfred his big arc this season is getting back in contact with his old commanding officer Gully Troy (James Purefoy) and them getting a crew together to do some jobs, Alfred’s big goal is to leave London and move to America and make a new life for himself.  Seeing James Purefoy was a treat, he’s one of the most unappreciated actors in my opinion, his role in the FOX series The Following, hands down one of my favorite characters and performances in TV.  Gully is a dangerous man but his bond with Alfred is evident and it is unfortunate we didn’t get more of them together this season, so much time was wasted on other storylines that simply were a bore (the nonsense relationship with Bet and Katie), sorry it’s like the writers forgot who the show is about.  So much of this season is focused on Alfred making bad decisions when I would have rather seen him working through other avenues of his grief but instead the insert this ridiculous story of Bet Sykes (Paloma Faith) and a prisoner Katie (Jessye Romeo) making a daring escape and trying to find safety.  This was just sloppy storytelling, seems like it was motivated by some studio official making a note for the show to be more woke rather than follow a narrative that focuses on the main character.  Alfred and his mom barely even discuss the events of the previous season, then when Alfred loses one of his best friends this even gets compartmentalized not just by the character but it seems by the writers, I was sad to see this character go and I really hated how this was handled when I look at all the story threads going on in the show, as a fan I felt cheated by this.

This season also felt as though it were taking itself too seriously.  It seemed to have gotten off message and just got bogged down with the Raven Union and London stand-off, honestly I found this part boring we’ve seen it before and it just was very anti-climatic, they try so hard to build stakes with Storm Cloud but it just goes nowhere.  When the story circles back to Alfred and Gully, the show shines brighter, and their little nod to Miller’s Crossing (intentional or not, still dug it).  Then one of the best sight gags involves a sex shop window over the course of the season, all I’ll say is keep your eye on the mannequins.

While season 2 started off with plenty of material I’m disappointed for where things went…BUT…I haven’t given up on this show.  There is still plenty of potential and where season 3 could be heading I’m feeling optimistic.

Pennyworth is presented in the aspect ratio 1.78:1.  The 1080p image is arrived at with an AVC MPEG-4 codec at an average of 29 mbps.  As you would expect from a series in the Batman universe the show is dark and gloomy so don’t expect a wide robust color display.  The one negative thing I have to say about the series is how bad some of the CGI looks at times when doing wider shots displaying the size and scope of the city, because good portions of this are CGI created it definitely has a video game like appearance.  There is a good deal of saturation to the image but it works when setting up the shows aesthetic.  The black levels are really the highlight here, whether it’s in the dark and shadowy alleyways or simply the detail in the costumes.  It may not be the best looking show but it fits the tone of the story they are presenting here.

The DTS HD-Master Audio 5.1 track is robust. Most importantly the dialogue comes through clearly which is important especially with the variety of accents from the cast.  The action sequences sound great as the subs get plenty of work with the impacts and gun fire.  One of the sequences that best utilizes the surround system involves Alfred along with a crew knocking over a wrestling event and an explosive device is used.  It’s fun, the sound can be disorienting but it definitely puts you into the situation with the characters.

As much as I enjoyed season 1 this new season just left me disappointed and underwhelmed.  There is some good stuff here but it means having to suffer through some boring filler.  Hopefully season 3 will bring the attention back to Alfred and the Wayne family instead of focusing on characters so removed you have to wonder why they were created in the first place.

Brent Lorentson is a horror writer and film critic based out of Tampa, Florida. With a BA in Digital Film, he co-wrote and co-directed Scavenger Hunt. His short stories have appeared in various horror anthologies. In 2019 his short script Fertile Blood will be a part of the anthology horror film Slumber Party. He is currently working on his first novel A Dark and Secret Place set to be released in late 2019. Favorite Films: Taxi Driver, Fight Club, I Saw the Devil, The Wild Bunch, Dawn of the Dead, A Clockwork Orange, Pulp Fiction, Heathers, The Monster Squad, and High Fidelity.
Old Spiral (UHD Blu-ray) (4K)