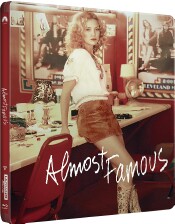 “Some people have a hard time explaining rock ‘n’ roll. I don’t think anyone can really explain rock ‘n’ roll. Maybe Pete Townshend, but that’s okay. Rock ‘n’ roll is a lifestyle and a way of thinking… and it’s not about money and popularity. Although, some money would be nice … And one of these people is gonna save the world. And that means that rock ‘n’ roll can save the world… all of us together. And the chicks are great. But what it all comes down to is that thing. The indefinable thing when people catch something in your music.”

It doesn’t take much more than that little piece of dialog to understand that Cameron Crowe really gets what rock ‘n’ roll was once all about. If you need more proof than that, then you’re in luck, because Paramount is giving you 163 minutes of proof, and for the first time in UHD Blu-ray in all the glory of 4K. Almost Famous is one of the best rock movies ever made. It’s right up there with This Is Spinal Tap, but for very different reasons. The film captures that sweet spot in rock when the pioneers were still around and right before things became far more corporate. The early 1970’s was the perfect moment of “the tour” and the rock star and The Cover Of The Rolling Stone. Cameron Crowe knows what all of that means, because he covered it for decades as a rock journalist. It’s obvious he lived some of this stuff, if not all of it. And the hardest part was, he managed to put together just the right team of people to faithfully get it on film.

Patrick Fugit is young William Miller. He’s a bit of an adult trapped in a kid’s body. He’s skipped grades and can’t relate to the kids he is in school with, which also leads to a lot of abuse. His mother’s a bit of a woman out of the 1950’s Cleavers. Her son and daughter need to be sheltered from rock music and other tools of the devil, and it leads sis Anita, played by Zooey Deschanel, to escape home to be a stewardess while leaving her record collection to her naive little brother. It changes his life. He starts to write short articles for the school and local paper about the music and sends them to his rock writing idol and critic Lester Bangs, played by Philip Seymour Hoffman, who encourages him to embrace his skills. Bangs hires him to cover a Black Sabbath concert, where he can’t get through the door to talk to the band. But he makes two introductions that will drive the film and change his life.

Enter Penny Lane, played by Kate Hudson, who is a well-known groupie … eh, bandaid. She tells him that she wants to change the designation to be about the music and not sex with the musicians, although we’ll soon discover that’s not really out of the question. Her fire and passion excites William. Next he meets upcoming band Stillwater, and they decide to get him into the show almost as a kind of mascot. His writing catches the attention of Rolling Stone, which hire him to acccept the band’s tour invitation to write a cover piece for the iconic magazine. Of course, they have no idea he’s only 15 years old. His innocent charm and naivete allow him to get close to the band, who refuse to see him, as one member tries to point out, as the enemy. From here on it’s a coming-of-age story played out with the background of a young band just finding success and their joint discovery of “the road”.

The film is full of so many wonderful moments that it’s impossible to describe them here. They come one right after the other, and Crowe manages to flawlessly tell the story from these three kind of converging viewpoints and world views. It’s astonishing how real and immersive these characters and moments truly are.

Let me take this opportunity to introduce you to the band. As much as this is a coming-of-age story for young William and the more-worldly-than-her-years Penny Lane, the band Stillwater is coming of age in so many ways. The relationships are complicated and rather unsettled, but the chemistry here is rather compelling. Leading the way is Billy Crudup as Russell Hammond, the leader and lead guitarist of the band. Crudup wasn’t a guitarist and went through a kind of boot camp with none other than Peter Frampton training him to play the leads and carry the stature of the stage player. While Crudup didn’t actually play the leads we hear, he learned them physically, and his stage presence totally sells rock star. He evolves so much in the film from a near tragedy of Penny Lane which makes him see her as a human being and his sense of morality. At first the band denies everything William wrote to the magazine’s fact checkers, only to come around thanks to a little push by Penny Lane. Jason Lee is the lead singer Jeff Bebe, and the chemistry and relationship between these two add so much of the film’s authenticity.

The film is crowded with cameos and a support cast that is solid in every aspect. Hoffman is stellar as Lester Bangs, and now in hindsight it’s somewhat bittersweet to hear him warn William against using drugs. If only the actor had taken those words to heart, he’d still be with us today. Also urging against drug use in one of the more amusing moments is Frances McDormand as William’s mother, the strict moralist who deals with his chosen professional excursion quite bravely, adding some of the film’s most poignant humor. Noah Taylor steals way more scenes than his character should as the band’s somewhat insecure manager.

The film is loaded with so many memorable moments. The group singing Elton John’s Tiny Dancer is one of the most emotional and stands as the best example of the film’s heart. The potential plane crash has both amusing and quite revealing character moments. And then there is the incredible music. I’m not talking about Stillwater. I’m talking about the who’s who of 1973 rock that includes the aforementioned Elton John, Rolling Stones, The Who, David Bowie, Alice Cooper, Carol King and Peter Frampton.

Almost Famous is presented in its original aspect ratio of 1.85:1. The ultra-high-definition image presentation is arrived at with an HEVC codec at an average of 50 mbps. The film was shot on 35mm film, and the organic grain and colors of the source material are an important part of the feeling of authenticity here. There is no chance this film would feel the way it does shot on today’s digital formats. If ever a film demonstrated its need to be organic, this one certainly does. The HDR work delivers a bit better contrast than what I remember, but a dash of color here and there that highlights the moment in time mostly through costumes. Texture is everything here, and that goes for the unshaven faces to the fabric on the bus seats. The cool thing is this looks so much more authentic than the Blu-ray without leaning on the common crutches of gloss and DNR wipes. This could have been a disaster in 4K, but it retains all of those nuances that the film delivered back on day one.

The DTS-HD MA 5.1 track was initially a disappointment to me. I struggled with the fact it is basically the same audio presentation as the legacy Blu-ray. Why wouldn’t they take such a sonically important film and upgrade it all? Then I was halfway through the film and realized it was just fine the way it was. The music and dialog are served pretty much the way they were when the film was released, and again, it’s all about capturing a style and authenticity. Its clarity is unmistakable, and everything cuts through and warmly. Making this film more advanced risks sterilizing some of that warmth, and that would have been a crime. If it ain’t broke, don’t fix it. This thing ain’t broke.

There are two 4K discs here. No Blu-ray. You get the bootleg version which is about 39 minutes longer. That’s what I watched here. The other disc holds the theatrical version and all of the bonus features.

The features are separated into two categories: Greatest Hits, which collects all of the vintage extras, and New Releases, which adds some new stuff. All in HD not UHD.

Filmmaker’s Focus – Cameron Crowe On Almost Famous: (8:06) This is a feature found on all of the new Paramount Presents titles and is brand new. Crowe is talking from COVID quarantine. He talks about the autobiographical nature of the film and the spirit of the experience both for him and for us.

Casting And Costumes: (12:52) There’s a formula here. A character is introduced with a montage of costumes and audition/casting footage. The actors fill us in a bit, and we get a couple of minutes per character.

Rock School: (10:45) Some nice vintage footage of the band rehearsing as if they were a real band while being taught by real musicians.

Odds And Ends: (8:53) A collection of moments from the film.

I’m one of those original band musicians who recalls dreams of the stuff found in the film. It speaks to me on a personal level that it might not to the average viewer. I hope that’s not true, because there something really special about this film, and I hope it translates to everyone. “It’s happening.”

Gino Sassani is a member of the Southeastern Film Critic's Association (SEFCA). He is a film and television critic based in Tampa, Florida. He's also the Senior Editor here at Upcomingdiscs. Gino started reviewing films in the early 1990's as a segment of his local television show Focus. He's an award-winning recording artist for Omega Records. Gino is currently working on his 8th album Merchants & Mercenaries. Gino took over Upcomingdiscs Dec 1, 2008. He works out of a home theater he calls The Reel World. Favorite films: The Godfather, The Godfather Part II, The Body Snatcher (Val Lewton film with Karloff and Lugosi, not the pod people film), Unforgiven, Gladiator, The Lion King, Jaws, Son Of Frankenstein, The Good, The Bad And The Ugly, and Monsters, Inc.
Mortal Kombat (UHD Blu-ray) (4K) Old