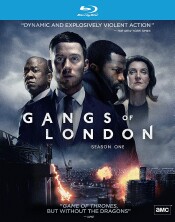 Except that Finn Wallace was a crime lord, and he ruled the other criminal gangs in London with an iron hand. He may indeed be dead, but with Gangs Of London created by Gareth Evans, that’s really just the beginning of the story. It’s a complex story with only 10 episodes to deliver for a first season. Just how well are those stories told? That’s also a complicated question.

The first thing we see is the brutal killing of a street thug. The scene jumps ahead a week from when the story will actually begin, but it’s one of the most brutal killings I may have seen on television. And I can’t say it’s the most brutal thing you’ll see on Gangs Of London. Sean Wallace, played by Joe Cole, has a thug at the top of a London high rise hanging by a rope over the side with about a 150-story drop beneath him. He’s upside down tied off by his feet. He’s trying desperately to tell his torturer that he doesn’t have the information he’s looking for. Eventually Sean decides he’s gotten as much as he can from the guy and pours gasoline down the length of the rope and over the thug. Then he lights a match, and the guy burns in midair before the flames break the rope and send the tumbling unfortunate down to the street below, aglow against the dark of the London night. What could have caused such brutality? We’re about to find out.

Two low-level street punks are preparing to do a hit they were hired for over the phone. (See, I keep telling you guys those things are nothing but trouble.) As they set up at the location they are given, they carry out the hit, discovering too late to stop that it’s London’s most powerful crime lord, Finn Wallace. They know they are in deep trouble and flee the scene, but their actions have set off a war in the city.

The Wallace family has built skyscrapers in London like the one where the thug candle was sent to the ground below. They also serve as  safe transportation for the other major crime families in the city. Sean is out-of-his-mind crazy. His chief advisor is Ed Dumani, played by Lucian Msamati. He has been Finn’s advisor since he started. Ed has been the point man who helped Finn build the criminal empire. His son Alexander Dumani, played by Paapa Essiedu, has pretty much grown up with Sean and his brother Billy (Vernel) since they were kids. He’s trying to get Sean to look at the future business needs, but Sean follows the Sonny Corelone way of taking over for father. He announces that all business is shut down until his father’s killer is brought to him.

Now we’ll watch several of these criminal families deal with the aftermath. Lale (Rashidi) is a woman who engages in the drug trade to send money back to her country for food and weapons. She runs afoul of another gang leader, Asif (Mir), and these two have bad-blood history that is only a distraction to the Wallace situation. But the season spends a lot of time with the nuances of these various relationships.

Enter Elliot Finch, played by Sope Dirisu. He manages to track down some info and people that place him in the trust of Sean and the Wallace family even if Ed never does really trust him. There’s good reason. Elliot is a copper, but he’s been undercover too long and skates the line between good guy and bad guy in a kind of Donnie Brasco way. It’s hard to buy his law enforcement situation, because he doesn’t play either side straight, and the number of bodies he drops or happens to be around for are mind boggling. It doesn’t take long to realize that this is really Elliot’s story, and the rest is honestly background.

Of course, a lot of stuff comes out about Finn as time moves on and we learn he had another woman and might have been planning to leave the business and let the Dumani family take over. This ends up causing a violent rift between the once-close families and adds yet another tributary this story decides to throw at us.

That’s my biggest complaint about the show. There are so many characters and elements here that it was genuinely hard to keep it all straight. It doesn’t help that elements come up that end up not really leading to the story’s path, and some of it takes a lot of our time. I got the impression that most of this war was really just an excuse for the excessive violence. I’m not a prude here, and I like watching a good firefight as much as anyone, but bloodbaths on massive scale happen here in every episode, sometimes at the drop of a hat. The body count is staggering, and that would be fine if it didn’t just seem so dang gratuitous. There’s a torture scene of a woman caught trying to kill Sean that is as bad as anything I’ve seen in a torture porn film. It was honestly hard to watch. It also ruined a good song. I’m not sure I’ll ever listen to Only You again. It’s played over 30 times in the episode. It’s a symbol of the problem with Gangs Of London. Everything is at excess except tight storytelling.

The performances are all top-notch. There are too many compelling characters here. Michelle Fairly plays Mother Wallace, and she is the most brutal member of the family. We can understand why a hardened criminal like Finn would even want to get away from her. Elliot falls for a member of the Dumani family. She’s Shannon, played by Pippa Bennett-Warner. She’s great, but the character really doesn’t contribute to the story.  Finally there’s Star Trek and Hell On Wheels actor Colm Meaney. Fortunately there are a few flashbacks, so he gets a chance to deliver a few scenes, because he’s great here. It was a mistake, in my humble opinion, to start where the show starts. A season or two of Finn setting all of this up would have made his death far more powerful, and giving the supporting characters a chance to be established before Finn’s death would have been a great moment in the series. Instead we’re thrown into the deep end, and I’m not sure Evans really cares if we sink or swim.

You get all ten episodes on four discs with a 40-minute feature on the final disc. London is a fine background, and the show takes us to a side of the city we don’t usually see. Gangs Of London wants so much to be The Wire, but in the end it’s merely gangsters doing gangster things.

Gino Sassani is a member of the Southeastern Film Critic's Association (SEFCA). He is a film and television critic based in Tampa, Florida. He's also the Senior Editor here at Upcomingdiscs. Gino started reviewing films in the early 1990's as a segment of his local television show Focus. He's an award-winning recording artist for Omega Records. Gino is currently working on his 8th album Merchants & Mercenaries. Gino took over Upcomingdiscs Dec 1, 2008. He works out of a home theater he calls The Reel World. Favorite films: The Godfather, The Godfather Part II, The Body Snatcher (Val Lewton film with Karloff and Lugosi, not the pod people film), Unforgiven, Gladiator, The Lion King, Jaws, Son Of Frankenstein, The Good, The Bad And The Ugly, and Monsters, Inc.
Star Trek Discovery – Season 3 (Blu-ray) A Quiet Place Part II (UHD Blu-ray) (4K)