Posted in: Disc Reviews by Brent Lorentson on July 30th, 2021 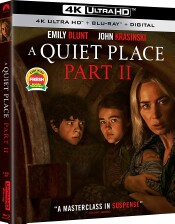 If it feels like you’ve been waiting a while for this film, well, you wouldn’t be wrong. Originally the plan was to release the film March 20, 2020, but this would be one of the first of many films that would be shelved due to the pandemic. There was talk about possibly releasing the film on one of the numerous streaming services out there, but thankfully it was decided to hold out till the lockdowns would end and movie theaters would open up wide across the US. It’s been a long wait for this highly anticipated sequel; was it worth it? I didn’t review the first film, but while I wasn’t exactly blown away by the film the first time around, as I’ve revisited the film I have to admit the film has grown on me, and I’d say it was my second favorite horror film released in 2018 (Sorry, Hereditary continues to knock my socks off to this day.) What sort of concerned me going into this sequel is how much would this work without Lee (John Krasinski)?  Thankfully the film has Krasinski returning to work behind the camera as director again, as well as aiding in the writing of the film, but most importantly they found a way to bring his character back for the sequel. Was the film worth the wait, or should they have left this as a one-off success?

The film opens up to Day 1 of the invasion. Audiences finally get to see how everything went down when the aliens first arrived. Here we get to see the Abbott family as a happy and whole family. A good portion of this revolves around Lee and how the family manages to survive the first wave of the attack.  I absolutely enjoyed this part of the film, though if you’ve seen the Steven Spielberg take on War of the Worlds, well, it will seem a bit familiar, but this definitely helps set the tone for this film. With a bigger budget we get a bigger production design as well as more aliens and more on-screen kills. One of the best aspects of the Day 1 sequence is that it definitely calls back to the first film, when the family is raiding the shop for supplies. Keep your eyes peeled for several props that find their way on screen.

The film then brings us back to where the first film left off, and we are reunited with the remaining Abbott family, Evelyn (Emily Blunt), her son Marcus (Noah Jupe), her daughter Regan (Millicent Simmonds), and of course the newborn baby that you know is just going to cause problems down the road. The kids have obviously aged since the last film, but thankfully not in a distracting way. The bright side to this is that their performances this time around have come a long way. The Abbott family leaving the farm is just the beginning of how this film opens the world around them. They are venturing out into a world they will hardly recognize, a world that belongs to the aliens and that nature is reclaiming. It’s not long till one of the members of the family gets injured and they find themselves in the hideout of a friend to the family before Day 1 of the attack.  This introduces us to Emmett (Cillian Murphy), who is a welcome addition to the cast but seems a little too convenient as a story device.

What keeps the story going is them finding a signal from a radio station that is playing “Somewhere Beyond the Sea”. It doesn’t take long for Regan to figure out that the song is being used as a cue to lead survivors to safety. It’s a bit of leap, but it sets up the next step in the family’s journey to find safety.  There are some bad decisions that are made here, the kind you’re used to seeing in horror films. I mean, for those who have seen Lost, you know hearing a random radio signal doesn’t always mean safety is at the end of that signal.

It’s the performances that carry this film and make this a more compelling film than it should be.  Sure Emily Blunt does a fine job, but it is Noah Jupe and Millicent Simmonds who really steal this film. The film easily could have gone the route of just making Blunt’s character a modern day Ellen Ripley and let her just be the badass protective mother, but instead in many ways they went the opposite direction and had her put herself and her kids in some extremely perilous positions. I’m not meaning that Evelyn is a bad mom; it’s just that she’s put in some tough positions where she’s forced to make some difficult decisions that easily can lead to dire situations. In the process this gives the kids numerous moments to shine. I know it’s early, but I wouldn’t be surprised if Simmonds got some sort of award recognition for this film. The amount of range she puts on display in this performance is incredible. It’s easy to forget that the actress is really deaf. Her performance genuinely transcends that.

We got to have the screening in a Dolby theater, and despite a good portion of the film depending on silence to develop tension, it’s the ambient sound that really amps up the film.  There’s some great tense moments where there is the subtle use of a heartbeat to build the tension. It’s just one clever trick used in the sound design that really makes the film work. This is definitely a film that reminds you what’s fun about seeing a film with an audience and on the big screen. Krasinski has certainly come a long way and is proving to be a capable director.

As for what doesn’t work, some of the logic used in the film just asks the audience to ignore logic a bit too much. It’s later in the film when this comes up, but I’ll just say that when certain characters make it to a small marina, prepare to suspend your disbelief a bit more. Don’t get me started on how illogical it is to have a baby when you have aliens with super hearing abilities. The film even tries to present ways to keep the crying at a minimum; well, we see how problematic that becomes. Then there is the use of Cillian Murphy. I’m a fan of the actor, and in some ways I feel this might be the closest we’ll get to seeing him in a sequel to 28 Days, but in this film I just feel he was wasted. It’s why I genuinely feel there was no intention of there ever being a sequel, or else they never would have killed off Lee in the first film.

While I found the movie entertaining, and it does move along pretty fast, it’s not quite up to par with the first film.  Both films have some amazing suspenseful moments, but there is something about the focus on the Abbot family in the first film that just holds up after several viewings. I’m sure this film will be a success, and I wouldn’t be surprised if we hear an announcement of a third film to be made in the coming weeks, but I just don’t feel this film will hold up as well.  There is plenty of room for a third film to go, but hopefully we won’t have to wait as long.

A Quiet Place Part II is presented in an aspect ratio of 2.39:1. The ultra-high-definition 2160p  image is arrived at by an HEVC codec with an average bitrate of 65 mbps. The ultra high definition gets most of its bump from textures in the details. This is a very textured world, and the UHD release is far more accurate in those fine details. Colors are particularly bright in this desaturated world. The black levels are quite rich and offer multiple layers of fine shadow definition. Contrast allows the film to exist in the darkness with nice bright elements that stand out considerably because of the HDR. The opening sky fire is a nice example, as is a night bonfire. The release has a bit of a grain element that makes the film so much more organic.

The Dolby Atmos defaults to a nice 7.1 mix.  This is a very quiet film, as the name suggests. Like the first film, the style creates a more intimate and meaningful encounter with these characters. It also makes sound far more important than it would be in a normal film. When there is sound, it stands out and offers a wonderfully immersive environment. You hear things in this mix that you don’t really pay attention to in most films. Now the wind blowing through the trees or a slight creak in a door attract your attention. Water movement is very nicely delivered. The abundant silent nature of this film is unique, and the sound design shows a tremendous attention to the little details that make this one of the better audio presentations yet in 4K.

Directors Diary: Filming with John Krasinski: (9:38) I wouldn’t quite call this a video diary; it’s more just a behind-the-scenes look on certain days of filming, but there is so fun footage here.

Pulling Back the Curtain: (3:47) Another behind-the-scenes look of the production and why they did the sequel.

Regan’s Journey: (6:19) This segment puts its focus on the character of Regan and the actress who plays her.

Surviving The Marina: (5:00) A behind-the-scenes look at what went into creating this sequence.

Detectable Disturbance: Visual Effects and Sound Design: (8:26) A brief glimpse at what goes into making the film as suspenseful and creepy with its creature design as well as the impressive sound design.

While nothing can really take the place of seeing a film on the big screen, A Quiet Place 2 holds up rather well when rewatching it at home.  If you’re a fan of the first film, this is definitely something worth checking out.  With a third film on the way but being helmed by a new director, I’m excited to see this world explored even further. Some films lose their magic after the first viewing, but this franchise is one I already enjoy revisiting, and it’s mostly due to the well-crafted family dynamic and the performances the actors deliver.

Brent Lorentson is a horror writer and film critic based out of Tampa, Florida. With a BA in Digital Film, he co-wrote and co-directed Scavenger Hunt. His short stories have appeared in various horror anthologies. In 2019 his short script Fertile Blood will be a part of the anthology horror film Slumber Party. He is currently working on his first novel A Dark and Secret Place set to be released in late 2019. Favorite Films: Taxi Driver, Fight Club, I Saw the Devil, The Wild Bunch, Dawn of the Dead, A Clockwork Orange, Pulp Fiction, Heathers, The Monster Squad, and High Fidelity.
Gangs of London: Season 1 (Blu-ray) Jungle Cruise