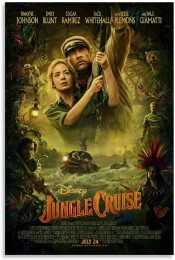 Going all the way back to 2003 when Disney released The Haunted Mansion and The Pirates of the Caribbean, it seemed like the natural progression would be to release a film based on the theme parks Jungle Cruise ride. With the success of the Johnny Depp-helmed films, Disney instead elected to crank out more Pirates of the Caribbean films. Sure, the original trilogy was fun, but the two that followed were forgettable messes.  Now it’s 2021, and we’ve finally gotten a Jungle Cruise film helmed by one of the biggest stars in cinema, Dwayne (don’t call me The Rock) Johnson and Emily Blunt sharing top billing credit. The trailers teased a film that was in the vein of the Indiana Jones films, something I believe could be a good thing. What was somewhat expected was the added layer of a supernatural element put into the film. While I was excited about the supporting cast and even the director that came aboard to helm the film, the one thing that bothered me was how long it’s been since I’ve actually enjoyed a live-action Disney film. With the talent involved, I felt there was plenty of opportunity for the film to be a success, but I couldn’t help but worry when I remembered the awful cinematic experience that Aladdin was. I’ll be blunt; I went in optimistic with that film because I’m a long time Guy Ritchie fan, but I really hated Aladdin. So what did I think of Jungle Cruise?

I have to admit I got excited as the film started up with the logo, and I’m hearing the melody from a Metallica song. We get an introduction to The Tears of the Moon, a mythic tree with healing capabilities that is hidden within the South American jungle.  Our introduction to Emily Blunt’s character kind of threw me off. Everything seemed to point to her being a strong female lead, perhaps delivering a female version of Indiana Jones, though more concerned with biology than archeology, but the result was something rather different … Throughout the introduction of Lily Houghton (Emily Blunt), all I could think of was the character Rachel Weisz played in the Mummy films, smart but adorably clumsy and always getting into trouble by mistake. Not exactly the strong female lead I was expecting. In fact I feel this movie plays much closer to the Mummy franchise than it does with anything else. Well, Lily finds an arrowhead that is believed to help lead the way to finding The Tears of the Moon. Unfortunately Lily isn’t the only one after finding the mythic tree; a German Prince Joachim (Jesse Plemons) is also looking to acquire the tree.

Then there is Frank Wolff (Dwayne Johnson), who runs his own river tour company, though he isn’t doing too great a job of it. When we first meet up with Frank, he’s giving a tour, and for fans of the ride this will all seem a bit familiar, especially with all the puns. This film has a lot of puns … I mean, a lot of them. Personally I found it to be part of the film’s charm, but I know some people just can’t appreciate a good Dad joke, and this film is overflowing with them. I wouldn’t go so far as to say I’m a fan of Dwayne Johnson, but this film seemed a good fit for him. I’m not expecting Oscar-caliber performances from the man, but this film he was consistent with being charming and entertaining.

The supernatural element of the film involves a group of conquistadors who have been cursed for 400 years and have been summoned to retrieve the arrowhead from Lily while she’s on her journey, with Frank piloting his ship down the river. If you get a sense of déjà vu with these cursed characters, don’t feel bad; it’s hard to not immediately think about the cursed pirates of Davie Jones’s Locker from the POTC films. Even the CGI look of the characters will have you confusing the two, but I have a theory about that, and it involves the possibility of the Pirate films being mashed up with the Jungle Cruise to deliver a story with overlapping characters. Am I reading into it? Possibly, but I still think it would be pretty cool to see.

A lot of the humor in the film comes from Lily’s brother MacGregor (Jack Whitehall). To a degree they play against stereotypes in adventure films with this character. As we see the arc of this character develop, I was happily surprised with how much I enjoyed this character. The real chemistry of the film is between Johnson and Blunt. I was relieved that they didn’t force a relationship, but instead gave these characters room to develop something deeper. We’ve all seen the cheap romance enough times that it was refreshing to see these two together.

I really enjoyed the look of this film. While I’m sure there were plenty of CGI backgrounds, some of the location footage looks great. I’m somewhat surprised there were not bigger stunts in the film; one of the biggest ones had me thinking about Avatar as the characters are climbing and running around trees at ridiculous heights that just seemed improbable. The lack of interaction with them in natural surroundings does cheapen the films a bit. It’s partially what had me hoping the film would resemble The African Queen a bit more.

While this is an adventure film, the film could have used a couple more action beats. I don’t mean that the film is boring, but I feel the film could have used some tension and suspense. Using predictable character twists doesn’t point towards tension building.  While I understand where some adults may complain, this film in my eyes is entertainment bliss for my inner 12-year-old. This film isn’t after awards, but instead bringing people into theaters, and unfortunately downloading to view at home. This film is meant to be seen on a big screen, to escape the living room and the stresses of the world and just enjoy it with an audience. Director Jaume Collet-Serra stepped up to the plate and delivered a fun adventure film that had me fondly thinking back to the Richard Chamberlain film King Solomon’s Mines, and as I mentioned, 1999’s The Mummy.  The film is playful and fun, and if not for COVID I feel this could have been the movie of the summer. Sure, you can bicker about the CGI and how the story feels familiar, but it seems every big-budget movie is brimming with CGI, and, well, studios seem to be afraid to tackle original concepts. If you’re looking for a film the entire family can enjoy, this is it. I’m already looking forward to a return trip with this film; hopefully you will be as well.

Brent Lorentson is a horror writer and film critic based out of Tampa, Florida. With a BA in Digital Film, he co-wrote and co-directed Scavenger Hunt. His short stories have appeared in various horror anthologies. In 2019 his short script Fertile Blood will be a part of the anthology horror film Slumber Party. He is currently working on his first novel A Dark and Secret Place set to be released in late 2019. Favorite Films: Taxi Driver, Fight Club, I Saw the Devil, The Wild Bunch, Dawn of the Dead, A Clockwork Orange, Pulp Fiction, Heathers, The Monster Squad, and High Fidelity.
A Quiet Place Part II (UHD Blu-ray) (4K) The Suicide Squad (2021)