Posted in: The Reel World by Brent Lorentson on August 7th, 2021 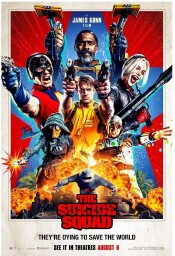 It doesn’t seem all that long ago that Disney/Marvel decided to fire James Gunn over a couple of tweets and Warner Brothers decided to scoop up the talented director to helm a reboot of The Suicide Squad. Personally, I feel this was the best move WB has done with their DC film projects since the Christopher Nolan Batman films. I’ll come out and say it: I haven’t been a fan of the DC cinematic universe. Wonder Woman and Shazam were decent, but they simply don’t hold up to what Marvel has been able to produce. While I’m fine with attempting to tell more mature storylines and appeal to an older audience, my biggest problem with the DC films is that they just weren’t fun (Shazam is perhaps the only exception to this). I’m not part of the “Release the Snyder cut” crowd; instead I just want to see a comic book film that can be entertaining and not take itself too seriously, and that brings me back to James Gunn. I’m a fan of Gunn. I absolutely adore what he’s done with The Guardians of the Galaxy, those are both in my top 5 of the Marvel films, because I love how he handles the group of misfit heroes. I even like Gunn’s earlier work like Super and especially Slither, his cinematic story of coming out of Troma I view as one of the best underdog stories in Hollywood and how he’s become an A-list director. The moment he signed on for The Suicide Squad I was excited. In my mind I felt this was what WB/DC and movie fans in general needed. Giving Gunn the freedom to make the film he wanted to make could seem like a risk, but I think Gunn had something to prove after being released by Disney, and the result is cinematic bliss that is the injection of gory comic book mayhem that fans have been waiting for.

While this take on The Suicide Squad does have characters and actors returning in the same roles from the previous attempt at Suicide Squad by director David Ayer, do yourself a favor and just pretend that film doesn’t exist.  Heck, I even reviewed the film just about five years ago to the day, and while the film does have some fun moments, it just doesn’t hold up after further viewings, though I’d still love to see a Joker and Harley Quinn date night movie, but that’s a whole other discussion.

This film starts up with a bit of urgency as we see a team of DC rogues thrown together for a mission. Really, the film’s opening 15 minutes is going to shock a lot of fans, and I don’t want to spoil things, but I will say be careful about what characters you get attached to, because they may not last as long as you’d expect. This decision by Gunn to go this route is a bold move, but it instantly raises the stakes for the film and gives credence to why this is called The Suicide Squad.  The action gets started right away with this film, and very quickly you understand why this film was served an R rating by the MPAA.  We haven’t gotten to see DC or really any comic book film get this violent before, and I’m curious how audiences are going to receive this. Personally, I loved it, but beyond the violence what surprised me most was how much this film had me laughing, and this is all while characters are dying some truly gruesome deaths.

The film is pretty straightforward; it’s a guys-on-a-war-mission film, basically Inglorious Bastards, but of the comic book variety. It’s basically a group of characters out of the DC rogues gallery who are put together to go on a mission that no one really expects them to survive. There’s even an amusing sequence where we see people taking bets on who will die on this mission. Amanda Waller (Viola Davis) once again is putting together a team, and I just want to say, WOW, she may not have much screen time, but she is just brutal in this film and is honestly the scariest character in this film. Davis brings so much to this role, and I just enjoyed hating her character this time around. The big mission this time is that the Squad has to stop Project Starfish and destroy the facility where some bizarre experiments are taking place. It’s simple enough, but it’s the dynamic of the characters that make up the Task Force X, aka The Suicide Squad, that drives this film.

The familiar faces returning to the squad are Colonel Rick Flag (Joel Kinnaman), Harley Quinn (Margot Robbie) and Captain Boomerang (Jai CourtneyWhat’s surprising is what Robbie has been able to do with her character. It’s not until this film where we get to see this character shine to her full potential. Harley may not be the star of the film, but there are two sequences in particular where she practically steals the entire film. The sequence teased in the trailers where she escapes being captured is just one of many sequences in this film that had me grinning and giggling while seeing her at her fully violent potential.  Just seeing how they play with the typical trope of a female being captured and “in need of rescue” is what makes this film special. Standing back and thinking about it more, it’s refreshing how the females are written in this film and not feeling as though you’re being bashed over the head with a woke message. It’s just good writing and better acting that make the women in this film so awesome. Ratcatcher 2 (Daniela Melchior) is somewhat the anchor and heart of the group with her special ability to control rats. Her four-legged companion, Sebastian, is another scene stealer.

Really just about everyone in this movie has their moment to shine. Bloodsport (Idris Elba) just chews up every scene he’s in and easily makes us all forget about Will Smith in the previous film as a deadly assassin. Then there is Peacemaker (John Cena) in what I feel is his best performance on the big screen. His ability to banter with Elba is yet another part of this film’s charm. Seeing them attempt to one-up each other while taking out a village of bad guys is just another part of what makes this film so damn fun. And then there is King Shark, voiced by Sylvester Stallone. I get how some people won’t be a fan of this depiction of the character, but I had a blast with this character., I feel James Gunn has just made him the Groot of DC films.

If there is any complaint I have about the , it’s the final fight where we see The Suicide Squad fight Starro. It wasn’t even needed … OK, it’s not even a complaint; the film was already a blast having them just reach their destination, but the fight is just an extra slice of cake for dessert. It’s over-the-top, and it doesn’t disappoint. If you’re worried I spoiled anything, well, it’s in the trailers, and seriously, there is way more in this film than I have even touched upon, like what makes Polka Dot Man tick.

The film is insanely violent, and it has a great soundtrack, but what makes this film work is the chemistry these characters have on screen and the surprising amount of heart this film has. It’s the film’s little moments where we get to see the characters let their guard down where the film makes its biggest impact. While I love this movie and feel it’s the best movie of the summer, I still feel the first Guardians of the Galaxy is James Gunn’s masterpiece. This is a movie, though, that I’d imagine people will either love or just hate on it for its over-the-top violence. Honestly, this film earns its R rating, and parents should be careful if their kids are the least bit squeamish. It’s unfortunate that this is getting a release on HBO the same day as the theatrical release, because this movie deserves to be seen on the big screen. This is a big-event film that’s worth seeing with a crowd to laugh and cheer with despite COVID restrictions. This is definitely a movie that reminded me why we enjoy going to the cinema. It’s what is fun about being a comic book geek and just enjoying senseless violence for a little over two hours. While Jungle Cruise might be the family film of the summer, The Suicide Squad is the ultimate escape to end the summer.

Brent Lorentson is a horror writer and film critic based out of Tampa, Florida. With a BA in Digital Film, he co-wrote and co-directed Scavenger Hunt. His short stories have appeared in various horror anthologies. In 2019 his short script Fertile Blood will be a part of the anthology horror film Slumber Party. He is currently working on his first novel A Dark and Secret Place set to be released in late 2019. Favorite Films: Taxi Driver, Fight Club, I Saw the Devil, The Wild Bunch, Dawn of the Dead, A Clockwork Orange, Pulp Fiction, Heathers, The Monster Squad, and High Fidelity.
Jungle Cruise Those Who Wish Me Dead (Blu-ray)