Those Who Wish Me Dead (Blu-ray)

Posted in: No Huddle by Jeremy Butler on August 9th, 2021 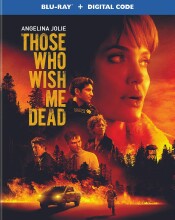 With a little more character development, Those Who Wish Me Dead would have been a really intriguing story. The film had a winning recipe: a script written by the man who gave us Hell Or High Water/Sicario (Taylor Sheridan), a cast that include talent like Angelina Jolie, Jon Bernthal, Nicholas Hoult, and Aidan Gillen, as well as a rifle-toting pregnant woman on horseback. What more could you ask for? If only adequate time had been spent fleshing the characters out and answering some of the questions that were posed during the film’s runtime. As it stands, the film never gets past the initial intrigue phase, because despite all the things the film did have, it’s what the film was missing that defines it.

The film attempts to tell the story of Hannah Faber (Jolie), a smoke jumper (quick definition: a specifically trained wildland firefighter that provides initial attack response against remote wildland fires), who is emotionally scarred from her last wildfire in which four lives were lost due to a perceived error on her part. As a result of this incident and a failed psychological assessment, she is temporarily reassigned to overwatch duty in an abandoned tower. It is very clear that the toll of the event still weighs heavily on her, and there are hints to suggest that she may be at risk of doing herself harm. In this capacity, Jolie is great. She expertly displays the emotional core of the character, providing heart to the film.

Meanwhile, forensic accountant Owen Casserly (Jake Weber), while having breakfast with his son, Conner (expertly played by Finn Little), sees a news report about the death of his boss in a mysteriously accident. Going into a panic, Owen and his son immediately flee. Owen’s instinct are spot-on, as it is revealed that the accident was actually a murder completed by a duo of professional assassins (Gillen and Hoult), and they are after Owen as well.

Heading to the only place he believes to be safe (a survival school in Montana), Owen contacts his brother-in-law, Ethan Sawyer (Bernthal), a Park County Deputy Sheriff. However, Owen never makes it, as the assassins catch up to him and attack. Mortally wounded, Owen ensures the survival of his son, who flees. Young Conner eventually crosses the path of Hannah, who endeavors to protect him from the assassins that are pursuing him.

Now that I’ve clued in to what is in the film, let’s address what’s not in the film. For starters, the explanation for why the assassins are so hell-bent on silencing anyone who knows what Owen discovered. Owen teases what it’s all about when he offers an explanation to his son for why they had to go on the run, but this teaser is the closet we come to an explanation. Making it worse, Connor presents Hannah with a letter written by his dad that we suspects explains everything, but the audience is never given that information. Would it have been too much to ask for the letter to have been read aloud? Knowing what prompted this level of response would have gone a long way towards salvaging the film, and also impacts the film’s conclusion, because no true catharsis is achieved. We don’t even learn if justice is ever served.

Moving on from this, there is the matter with the demons that Jolie’s character is facing. We get that she feels personally responsible for the incident that led to the deaths, but based on the way the situation was explained, I’m not sure that her guilt passes the balance test. I guess if we see it like she is dealing with survivors’ guilt, I can somewhat understand her feelings. For the most part, however, it just seems to me that she is the scapegoat. From that angle, I would have expected to see her more angry than sad.

The cast does their part, though some actors are a bit typecast. I’m mainly referring to Gillen, who seems to be regulated to playing the bad guy. That’s not the say he doesn’t do a good job; he had a cold and calculating manner about him that played well with the character. Another thing I was unclear about was his and Hoult’s relationship. Early on I suspect they were some type of father-and-son duo, or perhaps brothers. Perhaps I missed it, but the connection between the characters wasn’t clear to my view. Tyler Perry makes a cameo as a shadowy handler for the assassins. While it was nice to see him, I’m not sure about his addition added to the film. If they had taken this time to explain the killer’s motivations, that would have been very beneficial. They could have had him explain. Seems like a bit of a wasted opportunity in my opinion.

Another thing for me was that despite being armed with automatic weapons and semi-automatics, I’m not so sure that Gillen and Hoult were the true antagonists of the film. If you ask me, the lightning strikes and subsequent wildfire gave Jolie’s character a lot more trouble than the assassins. I would be remiss if I didn’t mention the rifle-toting pregnant woman on horseback again, which if I must say was probably my favorite character of the film. That is not to say that Bernthal scene where he shows spine against immeasurable odds was not a good scene, but Medina Senghore stole the show when she not only fought off attackers, then proceed to go from the hunted to the hunter. Speaking of stealing the show, Finn Little, who I had no knowledge of prior of to this film, held his own with a cast of seasoned professionals. He brought emotional resonance to the film, and I look forward to seeing him in other projects.

It’s worth mentioned that this film is also available for home viewing for the next month via HBO Max. I am tempted to watch it again to perhaps see if any details come into focus upon another viewing; however, as is I’m not sure the film is worth another viewing. I didn’t dislike it, but leaving the theater with more questions than answers, somewhat sored the experience for me. I’ll let you know if I decided to watch it again and if so, if anything else becomes more clear.

The Blu-ray release comes with only a 15-minute behind-the-scenes feature and not a lot of oomph in the audio and video department. Warner doesn’t see a lot of gain from putting much into the film, and they’re pretty spot-on there. It’s been available for streaming, and that’s really going to be all you’ll need to try the film out.

Jeremy Butler is a film school graduate of the International Academy of Design and Technology. He is been writing for Upcomingdiscs since 2012; however, movies have played a big part of his life for much longer. Favorite genres include horror, science fiction/fantasy, and comedy. Favorite movies are V for Vendetta, Boondocks Saints, Kiss Kiss Bang Bang, and The Godfather.
The Suicide Squad (2021) G.I Joe Rise of the Cobra (UHD Blu-ray) (4K)