Posted in: Disc Reviews by Jeremy Butler on August 9th, 2021 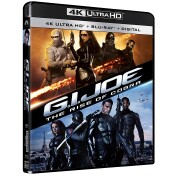 So it’s back to the one that started them all with this review. Coming hot on the heels of a film set to reboot the franchise comes the re-release of the first live-action film adaptation of the popular Hasbro property starring Channing Tatum, Marlon Wayans, Rachel Nichols, and Dennis Quaid. I remember loving the film back when it initial debuted, but now seeing it through the scope of age and wisdom, I can recognize that the film was only decent in comparison to the rave review I’d probably would have given it years earlier. That is not to designed to be a dig, because there are aspects of the film that I still to this day truly enjoyed, but it is very clear that story development was second to the action, as I watched again. Not to mention, not much was done in the way of character backstory and development, especially if you are someone with no familiarity with these characters prior to the watching of this film. The franchise appears to be addressing that now with the recent origin story release of one of the franchises’ most popular characters, but rectifying that now does nothing for this adaptation.

As I stated earlier, the film is not a complete lost cause, because there are aspects of the film that really shone, particularly Marlon Wayans’ performance. Now when I initially heard about his inclusion, I was a skeptic, because I knew him only as the over-the-top member of the Wayans family, but now I know him as Ripcord, the G.I. Joe team’s HALO (High Altitude Low  Opening) Jumper. A natural comedian, Wayans brings that element to his performance, giving balance to Tatum’s more serious performance. In the film, Ripcord is Duke’s (Tatum) best friend and partner. True Wayans is the film’s comic relief, but he also brings in the romance element of the film with his constant and shameless pursuit of Rachel Nichols’ Scarlett. This too brings some comic relief, but there is also some genuine chemistry between Nichols and Wayans, which I feel really improved the overall quality of the film. In fact of the two romantic angles portrayed in the film, I must say that this was my favorite.

While Tatum is the main character, his storyline is probably the least interesting of the film, probably due to his ever-changing motivation. In the beginning, he is motivated by his desire to avenge his men, but that is quickly done away with when he learns that the person responsible for his loss men is his lost love, a woman he abandoned after failing to be protect her brother during a mission years earlier. This lost love, who we all know as the Baroness, played by Sienna Miller, is a woman without conscience and beyond redemption, so it is difficult to root for these two.

Then we get to the main story of the film, as the Joes attempt to prevent a global destruction at the hands of maniacal tech genius using cutting edge technology that now through the scope of wisdom seems like a ridiculous technology. I understand that that it is never expressly stated that plot is unfolding in present time, and that this all could be occurring at a yet-to-occur future point (this is likely so the audience can better digest all the technological advances), but even still, the technology described throughout the film is too outlandish and over-the-top for me to accept the film’s premise. I could have accepted a viral outbreak or maybe even a global blackout, but nanotechnology that is capable of disintegrating anything in its path, but can also be used for mind control, sorry, too much for me to accept. Thank goodness they toned things down in the sequel.

More time needed to have been spent, introducing these characters. Some did well with the limited time, but others became one-dimensional. Take our antagonist; he wasn’t much of an antagonist, and while a reasoning for that is introduced in the form of a shocking twist, or at least what was supposed to be a shocking twist, this too fell short of the mark. So much so that I didn’t question it when the sequel went in a completely different direction.

GI Joe: Rise Of The Cobra is presented in its original aspect ratio of 2.40:1. The ultra-high-definition image presentation is arrived at with an HEVC codec at an average of 50 mbps. There is little to no upgrade here. Black levels are a little deeper, with costumes allowing for the greatest level of shadow definition. All in all it’s a pretty disappointing transfer which is not the norm for these Paramount 4K releases. It doesn’t appear there is much of any difference between the UHD and Blu-ray image presentations.

The DTS-HD MA 5.1 surround mix is just as disappointing. While there are some aggressive surrounds during the action sequences, there is a surprising lack of punch in the subs. There’s nothing immersive here, and it’s one of the flattest action audio presentations I’ve encountered on UHD. Dialog punches through, to be sure, but don’t go into this with any expectations. It’s pretty much identical to the vintage Blu-ray release.

There are no extras on either disc.

It’s funny how wisdom can change your perspective, because as I said, twelve years ago I utterly loved this film. And now, while there are things that I did enjoy, I’m not able to view the film with the same enthusiasm that I once did. I know better now, and I know that story quality is something that cannot be put on the back burner and replaced with intense explosions and outlandish action sequences. I’m not even going to get into the crazy suits that were designed to rev Duke and Ripcord up.

Jeremy Butler is a film school graduate of the International Academy of Design and Technology. He is been writing for Upcomingdiscs since 2012; however, movies have played a big part of his life for much longer. Favorite genres include horror, science fiction/fantasy, and comedy. Favorite movies are V for Vendetta, Boondocks Saints, Kiss Kiss Bang Bang, and The Godfather.
Those Who Wish Me Dead (Blu-ray) GI Joe Retaliation (UHD Blu-ray) (4K)