Posted in: No Huddle by Brent Lorentson on September 2nd, 2021 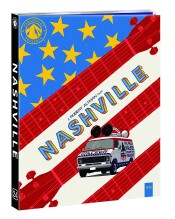 When I first saw Nashville, it was back in my days of working at a video store in the 90’s, and I was consuming a ridiculous amount of films a week. For many, it’s considered a classic and one of the better films that Robert Altman put out. Before re-watching the film for this review, I couldn’t remember all that much about the film aside from it having a lot of music in it and there being something involving a political campaign. I’m a fan of Robert Altman. Personally, Short Cuts and The Player are my favorite films by him, but I can appreciate that his way of storytelling paved the way for one of my favorite writer/directors Paul Thomas Anderson. Just watching Boogie Nights and Magnolia you can see the influence of Altman’s work from the script to the way they are filmed.  Now that I’m older, perhaps it was time that I revisited this film. After all, for many it’s considered a classic. Perhaps this time it could make a greater impression on me.

The most challenging thing about Nashville is that while it has a running time of two hours and forty minutes, when it comes to story there really isn’t anything going on that you can define as a story that has a beginning, middle, or end. The film is simply about 24 characters and how their lives intertwine over the course of five days in Nashville while a political campaign is rolling through town. The collection of characters is a blend of country musicians who are stars, to struggling mothers with deaf children, to a mourning husband, to a campaign manger along with numerous other characters that populate the town. If not for some of the great performances and the impressive cast, I’m not sure I could have made it through this film that seems like a country/folk music lovers’ paradise.

Haven Hamilton (Henry Gibson) is what I’d picture as the typical country Nashville star of the 70’s, and he’s filled with talent and bravado on equal counts. When we meet him, he’s dipping his toes into the political arena as well as mentoring a rising star. Gibson steals just about every scene he’s in, and to a degree is one of the few characters that seems to actually have an arc where we see whether he’s a man all about his own ego or if he genuinely cares about those around him. For those picking up the movie today, the most recognizable star would be Jeff Goldblum, who pops in and out of the film as a man on a tricycle. What is his overall purpose in the film? All I can say is he’s simply a connective tissue that brings all the characters together. There’s Lily Tomlin and Ned Beatty, who play husband and wife, and they do have juicier roles. Tomlin plays Linnea, a gospel singer who is also the main caretaker of her kids, one of whom is deaf. Beatty plays Delbert, who seems to be ashamed of his kid’s disability and isn’t exactly the best husband who seems to be wanting to hook up with a waitress that aspires to be a singer; unfortunately for her she’s a terrible singer with deluded hopes.

There are so many characters who come and go over the course of the film that it’s hard to figure out who is “important” and who is just stage dressing.  That seems to be the point that Robert Altman is driving home with this, that everyone is a star in their own eyes and that everyone’s story does matter despite how insignificant they may seem.  Early in the film we witness a car accident on the freeway, and Altman bounces from car to car allowing us to see how the delay impacts all of them, and just before that we get to see various characters interact at an airport.  It all seemed random, but still they all intertwine whether the characters realize it or not.

The film seems to build up to a campaign event that involves Hal Phillip Walker, a figure that remains mostly unseen, though we see his campaign van with giant speakers throughout the film playing recordings of his speeches. Where the film ultimately comes together is in the end, and to a degree it feels out of place, but I feel that was by design, to show that life sometimes can throw you curve balls that can be life-changing whether they are good or bad. The film is definitely a time capsule experience and was before my time. I can’t fault the film for being filled with music I’m simply not a fan of, though I can appreciate that the performers in the film wrote and sang their own music even if they are not trained musicians. I can appreciate what this film accomplished and how it paved the way for many films down the road, but honestly I’m not sure I’ll ever watch this one again. This is a film with a specific audience in mind, and, well, I’m just not it. This is certainly a film for those who grew up in a time when the country was still reeling from the death of Kennedy and the fallout of Nixon. For those who are fans o f country and folk, this may also be a film you’ll take a shine to, but if you’re a fan of M.A.S.H. or Altman’s work from the 90s and forward. this may be a hard pass.

Brent Lorentson is a horror writer and film critic based out of Tampa, Florida. With a BA in Digital Film, he co-wrote and co-directed Scavenger Hunt. His short stories have appeared in various horror anthologies. In 2019 his short script Fertile Blood will be a part of the anthology horror film Slumber Party. He is currently working on his first novel A Dark and Secret Place set to be released in late 2019. Favorite Films: Taxi Driver, Fight Club, I Saw the Devil, The Wild Bunch, Dawn of the Dead, A Clockwork Orange, Pulp Fiction, Heathers, The Monster Squad, and High Fidelity.
The Conjuring: The Devil Made Me Do It (UHD Blu-ray) (4K) Fear the Walking Dead: Season 6 (Blu-ray)