Posted in: Disc Reviews by Gino Sassani on September 2nd, 2021 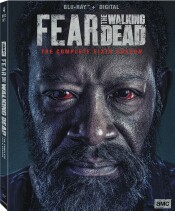 The first thing you should know about The Walking Dead franchise is that it’s unlike any television series you have ever seen before. The images here are intense, and the crew has been given a blank check to create this vision without the burden of censors looking over their shoulders. There are plenty of blood-and-gore effects that rival any of the Hollywood zombie films you’ve seen in the last few years. The makeup effects are handled by the very capable hands of KNB and supervised personally by Greg Nicotero (the N from KNB). KNB isn’t treating this like a television production, and while I personally get tired of the cliché about making a movie each week, this one lives up to the hype. They aren’t doing anything different here than they would do for a big-budget film. The zombies look incredible, and the effects are completely first-rate.

“It’s all right. I know you’ve been through a lot.”

If you need to know more before considering the sixth season of the spinoff, Fear The Walking Dead Season Six, you need to go back to the beginning. It will be well worth the time and money to do so. You can check out our reviews of the previous seasons by banging it here: Walking Dead Reviews.

Fear The Walking Dead takes place on the opposite coast of the original series. The first five seasons introduced us first to the Clark family and several others and we are with them at the beginning of the zombie apocalypse. It’s nice to get to know these characters during “normal” times. As the season progressed we lost members of that group, and now there is only one member of the Clark family still with the show. We followed them from L.A. to Mexico and back into Texas. Like the original show, they came upon various communities where they thought they were safe and for a time they were. Also like the original show, it’s the remaining people who are often more a threat than the walking dead. It’s Lord Of The Flies out there, and often every man, woman, child, and cat for themselves.

You really can’t get as much mileage from the series without catching up on those early episodes. There’s a lot going on here that you will not understand. The sixth season begins some months after the events of the previous year. The group has surrendered to a group led by a woman named Virginia, Ginny to her friends, played by Colby Minifie. Theytop folks wear keys as badges of trust. She has her own view of the future which relies on being quite ruthless. Her group has taken over the group’s oil fields and separated the captured group that we’ve been following over several interconnected communities. Meanwhile Morgan (James) is thought to have been killed by Ginny. Of course, he survived, but badly injured. He recovers and sets out to get the group back together and take out Ginny’s people. Along the way he manages to encounter yet another group who are obsessed with another key around a chain. He kills them and keeps the key, and it makes him a target. But why? John (Dillahunt) is separated from June (Elfman) and has also gotten himself appointed a ranger and is in a bit of a limbo throughout. It’s unfortunate, because this was one of the better characters, and I found him to be often wasted throughout the season. It was no secret the character was leaving the show, and I found his exit to be somewhat disappointing and meaningless. Morgan is free, but he worries about Grace (David), who he believes has radiation sickness, but we learn there’s another condition, and when he discovers the truth, it will drive him even harder in his mission.Alicia Clark (Debnam-Carey) is the last remaining survivor of the Clark family, and she is dropping quickly in status here. I found the side stories that featured her character to be the least compelling of the series. The truth is this is a large cast, and when you separate them like this, you dilute your strengths, and it makes for weaker storytelling all around.

Because they are somewhat separated, we don’t get a lot of episodes that include all or even most of the group we’ve been following for five years. Strand (Domingo) is trying to earn trust and becomes one of Ginny’s trusted rangers. Daniel (Blades) is pretending to have amnesia while he goes from community to community to cut hair. He’s really sizing up the situation and working to his own plans. But it’s Morgan who kind of ties the stories together. He was, of course, brought over from the original show and is one of the strongest actors and characters in the franchise. He’s truly become both the show’s emotional center and the glue that keeps our attention on a show that kind of meanders a bit too much with so many side stories going on. The focus attempts to be on Morgan and his discovery of a town that was revealed when water left a man-made reservoir. It has the dam’s solid walls and is a good choice for a settlement.

The first half of the season is actually quite tedious. I think I was done with the Ginny story before it even started. When it’s over, there’s relief all around, and for the second half of the season things get really good when we meet the real bad guys. I’m talking about Teddy, played marvelously by John Glover, who is an escaped serial killer who has found a cult that is willing to die to renew the earth through a nuclear explosion. Remember that key that people have been trying to kill Morgan over, yeah. John Glover is an underappreciated actor to say the least. I first noticed him in the short-lived but brilliant Brimstone, where he played Satan. He went on to be Lex Luthor’s father in Smallville, and he’s never disappointed yet. This bad guy does for this show what Jeffrey Dean Morgan’s Negan did for the first show. Zombies are way cool. I get it, but we’ve now had almost 20 years of shows featuring the same kind of “stab ’em in the head” confrontations. We need something more before it all becomes too redundant. You know, repeating itself. Doing the same thing over and over again. You get the point. Teddy does that for this show, and the final half of season six is the most compelling of the series.

We do get some interesting new characters beyond Teddy. The best has to be Keith Carradine as John Dorie, Sr. I hated to lose John, but his father comes in and steals scenes like he was Jesse James. He was the cop who obsessed over putting Teddy away in the world before and he knows him well. He gave up his family, job, and reputation to bring him to justice only to have the zombie apocalypse save him from the death chamber. My only regret for this story is that it was far too short. They should have drawn this out. The chemistry was wonderful, and they ended it after just a handful of episodes. They spent two seasons on less compelling stories. I think they are already regretting shutting this down so early.

Each episode is presented in its original aspect ratio of 1.78:1. The 1080p image is arrived at with an AVC MPEG-4 codec at an average 25-30 mbps. The high-definition image presentation gives you the best possible view of the amazing production standards on this series. There is sharpness and detail enough to suck you right into this world. Sure, there are some CG elements that don’t quite look real, but these guys have kept the computer work to a minimum. Most of this is practical, so there is a texture and detail here that can’t fail to impress. Black levels are fair, but this show doesn’t hide in the dark very often. Most of what you see here happens in the cold light of day. It’s a brave choice, one that’s rewarded with this transfer. There is a fair amount of grain, but it only makes the image that much more alive.

The Dolby Digital TrueHD 7.1 is just as impressive here. Again, this just doesn’t sound like a television show. It sounds like a feature film with a lot of money to spend on sound design. There’s far more sub activity than I was expecting. The film also does a great job with silence. There are effective uses of silence throughout. If ever a sound were visceral, this is it. You can hear the bone-crunching and squishing sounds of body parts being munched on. Dialog still punches through perfectly.

The f/x continue to be cutting-edge thanks to the talents of Greg Nicotero. It’s quite amazing to see how much detail and gore he can provide on a television budget. It doesn’t hurt that he obviously loves what he’s doing, and his passion is absolutely infectious to his fellow crew and castmates and eventually to us. This was groundbreaking television when it began. I’m happy to report it has only gotten better. “Still you may not like what you see.”

Gino Sassani is a member of the Southeastern Film Critic's Association (SEFCA). He is a film and television critic based in Tampa, Florida. He's also the Senior Editor here at Upcomingdiscs. Gino started reviewing films in the early 1990's as a segment of his local television show Focus. He's an award-winning recording artist for Omega Records. Gino is currently working on his 8th album Merchants & Mercenaries. Gino took over Upcomingdiscs Dec 1, 2008. He works out of a home theater he calls The Reel World. Favorite films: The Godfather, The Godfather Part II, The Body Snatcher (Val Lewton film with Karloff and Lugosi, not the pod people film), Unforgiven, Gladiator, The Lion King, Jaws, Son Of Frankenstein, The Good, The Bad And The Ugly, and Monsters, Inc.
Nashville (Blu-ray) Friday The 13th The Ultimate Collection (Blu-ray)