Posted in: No Huddle by Gino Sassani on September 9th, 2021 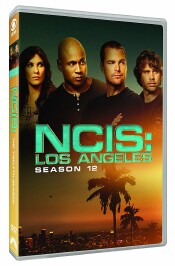 “Let’s just cut the crap and get on with it, shall we?”

You shouldn’t need a primer on the NCIS franchise by now. Unless you’ve been living under a rock for the last decade or longer, you’re up to speed on these guys. If not, you still could have some fun and enjoy the CBS DVD release of NCIS: L.A., but NCIS has been around for nearly 20 years, and this particular version has been around for 12 seasons now. That’s a lot of characterizations under the bridge and a ton of character evolution and stories that can’t help but give you maximum mileage out of the release. If you aren’t up to speed, you can check out over 30 seasons of various NCIS reviews by just banging it here: NCIS Reviews. That should keep you busy long enough to get you to the point that we’re here talking about Season 13. So hopefully you are up to speed, and we can get on with it. Shall we?

“You see, NCIS used to be this little-known agency that works efficiently and successfully under the radar.”

Well, thanks to the incredible success of the franchise, that’s kind of blown forever. The stories are pretty much the same kind of things we’ve been dealing with for a dozen years now, but this season likely sees more change than the entire decade before it. First of all, the show now has to deal with the reality of COVID, and that happens throughout the season with glass separators in interrogation, masks, and plenty of social distancing. You’ll notice that there aren’t as many guest stars, and the number of background actors has been severely limited. But that has actually been a little good for the episodes. We get a lot more characterizations and a lot more of the great chemistry that keeps this show on the air year after year and perhaps decade after decade. That’s particularly true of this spin-off. Of the entire franchise, this series has had almost no cast turnover during its entire run. We’ve lost a few recurring characters, but the main cast is pretty much the same folks who we saw back in the pilot. That’s all about to change with this season.

“Not the first time Hetty’s disappeared for an extended period of time.”

Once again, Linda Hunt is absent throughout most of the year. We really only see her perform a few key duties, and on the computer screen from a war zone that was actually the front driveway of Linda Hunt’s house. It’s not just COVID. Hunt suffered a pretty severe accident a while back, and she’s not exactly a spring chicken, so she’s been mostly MIA for a few seasons now. Still she’s really a heart of the show, and they find ways to keep her toes in the water still. Most of the season we learn that Hetty has been grooming Nell (Smith) to take over. She’s kind of back just to help out, and her heart is not in it. Her many years partner Eric (Foa) shows for a short time, but as the season comes to a close, we learn both won’t be returning next season to mark the largest departure in this show’s history. Eric has become a multi-billionaire, and it’s changed him quite a bit.

Helping fill that command presence is Simon & Simon’s Gerald McRaney as retired Admiral Kilbride. He’s a great presence this season, and it’s my hope he’ll be stepping up more in the future. McRaney is king of the grumpy one-liners and a perfect balance to the light characters of the team. The other characters all get big story elements this season, and these folks continue to grow right there on our television screens.

Callen (O’Donnell) sees his Russian connections come back and bite him hard. He gets suspected of being a Russian agent, and it really is amazing that the evidence doesn’t look very good. Deeks (Olsen) has the best arc this season. All of that police defunding catches up, and the LAPD has to drop the liaison program, so he loses his job and access to the team. Of course, Hetty arranges for him to get into the academy, where his age doesn’t do him any favors, and all the while he and Kensi are trying to have a baby and buy a nice house. The bar’s not taking in a lot of money during these COVID times. There are some real struggles here that give him so much to do. For Kensi (Ruah), she’s going through all of this and worried she can’t have a baby. For actress Daniela Ruah, she gets to direct an episode for the first time. Kensi is also dealing with a bad guy who wants to rape and kill her and is played by one of the show’s show runners, Frank Military. He’s actually quite good. It’s a storyline that has a lot of meat on the bone yet, and there’s going to be more in unlucky Season 13. Sam (Cool J) gets the least to do this season, I thought. His big episode comes when his daughter gets kidnapped, and the buildup to that is pretty much his focus this season. The daughter is getting pretty independent and has strong ideas of her own.

You get all 18 episodes on five discs. You get the typical CBS half-hour season wrap-up. Donald Bellisario died this season, and the first episode is dedicated to him. COVID has changed the way a lot of shows have had to do business over the last nearly 2-year period. You can really see those changes at work here, but don’t worry. The show is still true to everything you love about it. It’s still very much NCIS. “A tiger can’t change its stripes.”

Gino Sassani is a member of the Southeastern Film Critic's Association (SEFCA). He is a film and television critic based in Tampa, Florida. He's also the Senior Editor here at Upcomingdiscs. Gino started reviewing films in the early 1990's as a segment of his local television show Focus. He's an award-winning recording artist for Omega Records. Gino is currently working on his 8th album Merchants & Mercenaries. Gino took over Upcomingdiscs Dec 1, 2008. He works out of a home theater he calls The Reel World. Favorite films: The Godfather, The Godfather Part II, The Body Snatcher (Val Lewton film with Karloff and Lugosi, not the pod people film), Unforgiven, Gladiator, The Lion King, Jaws, Son Of Frankenstein, The Good, The Bad And The Ugly, and Monsters, Inc.
S.W.A.T. (2017) – Season 4 Mortal Kombat Legends: Battle of the Realms (UHD Blu-ray) (4K)