Posted in: Disc Reviews by Jeremy Butler on September 9th, 2021 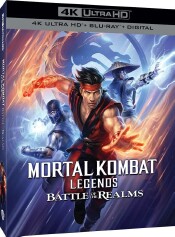 It would seem that the animated film and the 2021 live-action film suffer from the same issue: more time is dedicated to setting up the tournament than the actual tournament itself. I suppose I should take solace in the fact that the two are consistent; however, I’m afraid that is not the case for me. I would have much preferred that proper time be allocated to what is supposed to be the main plot of the film. The whole point of this franchise is to show champions fighting to protect the Earth realm, but it would seem that more time is shown depicting the underhandedness that the other realms attempt to use in order to secure Earth realm by other means. If that was the case, hell, why even have a tournament, if our fate is going to be decided through other measures. OK, that is my little rant about the film, but in truth, it is not a great film, but I wouldn’t go so far as to categorize it as terrible one. There are a few things to enjoy about it. Want to know more? Keep reading.

So the film maintains a good measure of continuity with its preceding film (Mortal Kombat Legends: Scorpion’s Revenge). Following Earth triumph, there should have been peace, but of course that wouldn’t make for a good movie. So to resolve this disharmony, we are thrown back into the thick of it. Basically, Shao Kahn, as expected, is a sore loser about losing the tournament, so he declares war on Earth realm. He sends his Outworld army to take the Earth realm by force. Also as expected, Earth’s champions rise up to defend humanity. Though initially succeeding in holding back the forces of Outworld, Lord Raiden agrees to Shao Kahn’s demand that another Mortal Kombat be held in order to determine the fate of Earth realm once and for all.

Earth’s champions rise up again to compete with an interesting addition to their ranks. I would tell you, but as this was something that came as a genuine surprise for me, I don’t want to rob you of the same experience. The novelty of the surprise doesn’t last long, I will warn, because following this brief moment of shock, the storyline with this character pretty much goes in the typical manner that you would expect. You will see for yourself.

Speaking of additional storylines, let’s take this moment to address the subplot to the film that surrounds Scorpion. Yes, that’s right; despite his grim end in the preceding film, we do get to see him again. While  I am a fan of the Scorpion character, and that is dating all the way back to the video game, I feel his presence harms the overall story. While the film attempts to give him a bit of a redemption arc that ties back to the previous film, I kind of feel that it was simply a recycle of an arc that was decently wrapped up in the last film. So again, as much as I love the Scorpion character, this subplot was predominantly unnecessary in my opinion. Without it, more time could have been dedicated to the tournament and individual battles.

As it stands, the individual battles were brief and vastly predictable. As such, they garnered no real excitement for me. Good fighting was substituted for blood and profanity. The fights were essentially 90 seconds of action, and then on to the next. It might as well have been a montage, and at certain points, it actually was a montage. Another thing that bothers me: It’s called Mortal Kombat, and a key tenet of the combat was that the fights were to the death. So when it comes to one character’s battle, where he essentially is allowed to live despite losing, that somewhat damages the credibility of the whole deal. Don’t get me wrong; I understand that the loss of this character (yes, I am being intentionally vague when it comes to the character’s identity) would have been great blow to the film in terms of comedic relief and the budding romance that was glacially being established. At the very least, the character would have been significantly injured and requiring medical treatment. That could have added to the film’s intensity. Feels like a wasted opportunity, if you ask me.

Not to be all negative, because as I mentioned there were certain things that I enjoyed, such as Joel McHale as Johnny Cage. Growing up, Johnny Cage was always my favorite character from the game, and to see him represented in all of McHale’s Community glory does my inner child some good. However, I must tell you, to really appreciate McHale in this role be sure to check out the extras for the gag reel. You won’t be disappointed, I promise you.

Mortal Kombat Legends: Battle Of The Realms is presented in its original aspect ratio of 1.78:1. The ultra-high-definition image presentation is arrived at with an HEVC codec with a bitrate that is kind of all over the place. It quickly jumps from the lower 30’s to over 120 mbps. This is an animated feature, so you kind of look at different things here. The animation angular lines are quite solid. It’s all very crisp and clean. The images can be pretty gory, and the detail of the animation makes its way to this image presentation. Black levels are pretty tight and offer much for a presentation that is often dark. There are not often splashes of color, but the HDR delivers with some remarkable moments that usually correspond to the energy weapons.

The DTS-HD Master Audio 5.1 track isn’t what you hope for on a UHD disc. No ATMOS or 7.1 audio presentation to be found here. You get some serviceable surrounds that give you some ear candy in the battles, but there isn’t anything really aggressive here even amidst the heavy action scenes. Dialog cuts just fine, and the score has a few moments, but don’t look for anything terribly dynamic here and you won’t be disappointed. Subs aren’t going to fill your room, and the experience isn’t going to shake anyone’s home theatre walls.

All of the extras are on the Blu-ray copy only.

The God and the Dragon (07:05): This serves as kind of a behind-the-scenes featurette explaining the thought process for the writer and director for not only this film but its preceding film as well. It was nice to know what the production crew had planned, even if I don’t feel like it all came to fruition in the film’s final product.

The Voice of Kombat (08:34): Meet the cast of the animated film. A fun little featurette, but the main one to remember is Joel McHale. I will also say that it was quite interesting to put a face to the voice behind Scorpion, as he looked nothing the way I imagined.

Kombat Gags: Gag Reel (04:06): As I mentioned, this is a special feature that you don’t want to skip if you are a Joel McHale fan, as he dominates at least 80 percent of this gag reel. It’s well worth it, though. Even the cast is in awe, as they wondered if he was given lines or allowed to run wild. The answer is both.

I think the film could have benefited from a cliffhanger too. This film felt like a conclusion for the franchise, and I think there might have been more story to tell, if done right. There is a storyline that references Liu Kang’s destiny, and throughout the film it is clear, especially during the introductory flashback, that this character is of great importance. However, that importance is crammed in the film’s final fifteen minutes. I think it would have had great impact to have ended the film on a cliffhanger and fleshed out that destiny in another film, but hey, what are you gonna do? Too late now.

Jeremy Butler is a film school graduate of the International Academy of Design and Technology. He is been writing for Upcomingdiscs since 2012; however, movies have played a big part of his life for much longer. Favorite genres include horror, science fiction/fantasy, and comedy. Favorite movies are V for Vendetta, Boondocks Saints, Kiss Kiss Bang Bang, and The Godfather.
NCIS: Los Angeles: The Twelfth Season NCIS: The Eighteenth Season