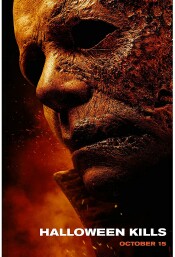 “Michael Myers has haunted this town for 40 years … Tonight we hunt him down.”

In 2018 when Halloween came out, I have to admit I was disappointed. Maybe I just had such high hopes, or the film just simply didn’t offer up anything fresh to the series as I had hoped. Sure, it had its moments, like the long tracking shot of Michael doing what he does best and leaving a trail of bodies behind, but aside from that, I felt it was a relatively forgettable entry. I love the original film. What John Carpenter did scared me as a child and still excites me after numerous viewings. Halloween II is a fun watch that I continue to enjoy. And for a more controversial take, I’m even a fan of Rob Zombie’s Halloween. I liked the time spent with a young Michael Myers, and I look at the film as basically a southern re-telling of the Boogeyman. The franchise is hit or miss, and the numerous timelines do complicate the lore, so I was more than a little skeptical about Halloween Kills and it being the middle of David Gordon Green’s trilogy.

The film picks up where the first film left us, and by first film I mean John Carpenter’s film, only we get a new perspective on how things ended, and it is through the eyes of a young Hawkins (Thomas Mann). This isn’t the first time the film will take us back to the events of the first film, but rather than show us the same thing over again, we get to see things through the perspective of the citizens and children of Haddonfield. Going this route is definitely a bold move, but I absolutely love how this film opens its scope and shifts its focus from Laurie and her family but instead gives its attention to the survivors of the first film and those impacted by Michael and his bloody reign.

When the film catches up to modern times, it’s immediately after the 2018 film with Laurie (Jamie Lee Curtis) and her family in the back of the pickup truck fleeing to the hospital as fire trucks are arriving to extinguish the blaze at Laurie’s home where Michael was left to burn. What follows is a big indicator to how violent and vicious this film is going to get when we see Michael simply annihilate this team of firefighters. Sure, people have protested this scene and were trying to campaign to have this scene removed, but let’s face it, those wanting the scene cut have no business watching this movie and should just go be miserable and watch Clifford The Movie. This movie earns its R rating, and I’ll happily say this is hands down the most brutal and violent slasher film I’ve ever seen.  It’s not just the high body count (this film exceeds 30 kills easily), but it is the brutality of the kills. The kills hurt; they make you flinch, and they toe the line of decency in a way that reminds you Michael Myers isn’t some misunderstood bad guy; he’s The Shape … He’s evil in a William Shatner mask.

When we catch up with the survivors of Michael Myers, Tommy Doyle (Anthony Michael Hall), Lindsey (Kyle Richards) and Marion (Nancy Stephens) are all celebrating together on Halloween in a bar, a tradition they have built over the years. I love that these characters actually are involved in this film and are not just around for a simple cameo, but the moment that got me the most excited is when Tommy discovers that Michael Myers is back and decides it’s his obligation to kill him. To go even further with his vendetta against Myers, when Tommy vows to protect Laurie how she protected him, as horror films go, that was kind of a touching moment that got me to love his character.

The cast this time around is big. This is a massive ensemble for a horror film, and sure, we know many of these characters  we see along the way are just set up to become more victims, but also this is done to show us more of the impact Myers and his killing spree can have on a community. We see the panic on the streets, the panic in hospitals as loved ones are trying to find out if loved ones are dead or alive. The hysteria we see unfold is what makes this film leave an impact, and we see the danger of what happens when people grab their pitchforks and torches to pursue an unknown figure. Yes, there is a lot going on in this film, and while I know others were complaining about this, I felt it gave the film a kinetic energy, and for once I was watching a slasher and didn’t quite know just how it was all going to end, and I think that’s pretty awesome.

When it comes to Laurie, her daughter Karen (Judy Greer), and Allyson (Andi Matichak), yes, they do indeed take a back seat on this film, but when we get to see them together, it is almost a reprieve for the audience from a lot of the mayhem. As for Officer Hawkins (Will Patton), who was left for dead back in the 2018 film, well, we get to see a little more out of this character. There are plenty more characters from 2018 and the 1978 films that we get to see again, and it kind of sets the tone for how this seems to be a film about how hard it is to move on and escape trauma and how it molds one’s character.

I was surprised when Peacock was given the go-ahead to do the same-day release with this film. Sure, using the streaming service means it can reach more viewers, but this is a film that deserves to be seen on a big screen and with an audience. There is something about a horror film, and especially a slasher film, when you experience it with an audience. The nervous laughter, the screams, and even the low chatter as people are recovering from a jump scare or vicious kill; it’s all part of the experience. I mean it when I say this is perhaps my favorite sequel to any slasher , and I genuinely enjoyed every moment of this film. As a horror fan, this is really one of the best experiences you can have at the movies. This is the perfect film to kick back and escape while enjoying the macabre. After all, “It’s Halloween, and everyone is entitled to one good scare.”

Gino Sassani is a member of the Southeastern Film Critic's Association (SEFCA). He is a film and television critic based in Tampa, Florida. He's also the Senior Editor here at Upcomingdiscs. Gino started reviewing films in the early 1990's as a segment of his local television show Focus. He's an award-winning recording artist for Omega Records. Gino is currently working on his 8th album Merchants & Mercenaries. Gino took over Upcomingdiscs Dec 1, 2008. He works out of a home theater he calls The Reel World. Favorite films: The Godfather, The Godfather Part II, The Body Snatcher (Val Lewton film with Karloff and Lugosi, not the pod people film), Unforgiven, Gladiator, The Lion King, Jaws, Son Of Frankenstein, The Good, The Bad And The Ugly, and Monsters, Inc.
The Nevers: Season 1 Part 1 Inglourious Basterds (UHD Blu-ray) (4K)