Posted in: Disc Reviews by Archive Authors on October 20th, 2021 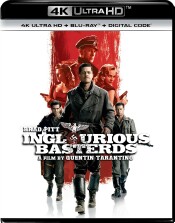 “My name is Lt. Aldo Raine, and I’m putting together a special team, and I need me eight soldiers. Eight Jewish-American soldiers. Now, y’all might’ve heard rumors about the armada happening soon. Well, we’ll be leaving a little earlier. We’re gonna be dropped into France, dressed as civilians. And once we’re in enemy territory, as a bushwhackin’ guerrilla army, we’re gonna be doin’ one thing and one thing only … killin’ Nazis. We will be cruel to the German, and through our cruelty they will know who we are. And they will find the evidence of our cruelty in the disemboweled, dismembered, and disfigured bodies of their brothers we leave behind us. And the German won’t be able to help themselves but to imagine the cruelty their brothers endured at our hands, and our boot heels, and the edge of our knives. And the Germans will be sickened by us, and the German will talk about us, and the German will fear us. And when the German closes their eyes at night and they’re tortured by their subconscious for the evil they have done, it will be with thoughts of us they are tortured with. Sound good?”

All right, so I’m a bit late to the party on this one, but I wanted to toss in my two bits anyway.

Quentin Tarantino’s films have always been about their dialog. They are not action-heavy – Kill Bill is the aberration here. When he is at his best, as in Reservoir Dogs, Tarantino’s dialog and active camera work together to generate suspense and give the impression of a plot surging forward even when nothing much is actually happening on the screen. At his worst, as in Death Proof, the film descends into turgid, self-indulgence, and then we are painfully aware of the man behind the curtain.

So it is that I walked out of Inglourious Basterds feeling extremely frustrated, and even a little bit angry. My anger was caused not directly by the fact that the film is a mess (which it is), but because Tarantino is a sufficiently talented filmmaker that the flick can’t be summarily dismissed and laughed at (as it is now possible, and even necessary, to do with anything M. Night Shyamalan goes near these days). What is good in the film is very good, but these moments of brilliance serve only to make us feel even more painfully what a failure the project is in so many other ways.

Let’s start with the title, which, a couple of deliberate misspellings aside, is lifted from Enzo Castellari’s film, previously reviewed on this site. Setting aside the fact that there is absolutely no connection between the two films’ plots (other than a vague Dirty Dozen-ish vibe), one nevertheless has to wonder why Tarantino would imply a connection between a film that barely takes a breather between its action scenes and his own, which contains about 35 seconds of action in its two-and-a-half-hour running time.

But why don’t we give Tarantino the benefit of the doubt for a moment? Let’s go with my initial premise, that his films are all about the dialog, in much the same way that, as Maitland McDonagh has pointed out, Dario Argento’s films are about the excess of style, with the narrative serving the ends of that particular form of cinematic exploration. Granting this, then, dialog takes the place of action in Inglorious Basterds, and the film becomes a battle of words. That can work. And indeed, the opening scene where Nazi Colonel Hans Landa (Christoph Waltz) plays a verbal game of cat and mouse, is grueling in its suspense and cruelty. All well and good, but then Tarantino feels the need to revisit this type of scene four more times. The suspense is gone, and three of those scenes are saved by Waltz’s astonishingly charismatic performance. But we miss him in the other instance, which is a tavern scene that is interminable and serves such a tiny plot function that it becomes one of the worst examples of the aforementioned self-indulgence.

So what about the characterization, which is another Tarantino specialty? Some of the characters are compelling, most notably Landa (but our Nazi villain is so much smarter and funnier than everyone else that we wind up rooting for him, and is that really a good thing?) and Shoshanna Dreyfus (Mélanie Laurent), the Jewish cinema owner whose revenge plot against the Nazis is not only the most interesting and riveting of the plot threads, it also renders everything Brad Pitt and company get up to completely redundant. More on this in a moment. But as for Pitt and his basterds, they have so little screen time that we feel very little connection to them, and Pitt’s Aldo Raine comes across as such a brutal (not to mention not terribly bright) thug that one feels that but for an accident of birth, there is nothing to suggest he couldn’t just as easily have been one of Landa’s less gifted underlings.

As for Shoshanna’s story, good though it is (cut all the other plot lines out of the film, and you’d have a tight little thriller), it is shot through with ridiculous moments (David Bowie’s song from Cat People on the soundtrack??!!). Then there’s the climax, which, without venturing into spoiler territory, combines the visually spectacular (and I might even say sublime) with the monumentally stupid (one moment, involving bombs, serves only to underline how pointless the other storylines are).

Finally, then, I’m left with this niggling suspicion. As much as Tarantino deeply loves the movies, and pays tributes to all sorts of genres, there are some exploitation genres that he is simply incapable of doing, perhaps because he self-love overwhelms all other romances and gets in the way of delivering the very things that made him fall for those other films in the first place.

Inglourious Basterds is presented in its original aspect ratio of 2.40:1. The ultra-high-definition image presentation is arrived at with an HEVC codec at an average of 50 mbps. I was quite surprised how much the HDR added to this film. It has a bit of a stylish color palette to it, and I suppose I always took odd color gradient for granted. Here you see some clearer color definition and some unrivaled shadow definition from any previous copy of the film you’ve seen. The texture of the uniforms rings out, and the bright red Nazi flags look brighter and more intimidating than they did previously. Gone is the rather soft-focus appearance of the Blu-ray. Instead we are treated to a level of detail that brings out the aforementioned textures and colors. Also more detailed production design that allows those efforts to truly shine.

The DTS-HD Master Audio surround track is not an upgrade. It is the exact mix you will find on the Blu-ray. And while it’s a great mix for that format, it falls flat here. Subs don’t do near the amount of work required, and the surrounds are rather lazy. The dialog is what is serviced here, and that’s fine, but I would have liked to have heard more.

The only features are ported over from the 2009 Blu-ray release.

Clearly speaking for his creator, Aldo Raine ends the film by boasting that he has made his masterpiece. Hardly.

Parts of this review were written by Gino Sassani & David Annandale