Posted in: Disc Reviews by Jeremy Butler on October 15th, 2021 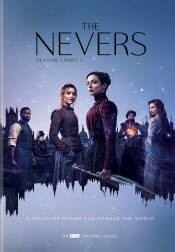 “Aliens from the future gave us magic powers. It was staring me in the face.”

This was a series that managed to catch me completely off guard. I’m still in a state of shock for how much I loved this show. Beforehand, I heard little about the show. I think I may have caught a glimpse of a commercial for it or the odd promo, but I never paid attention to it. I expected that it would be dreary and flat. Now, I’ve gone from thinking this was something I would have to endure for six episodes, to chomping at the bit to get my hand on the second set of six episodes. There were so many elements and themes that were combined with rich and complex characters. All the pieces came together to make this Lauren Donnelly and Ann Skelly-led series a masterpiece of entertainment. I know what you are thinking. The quote above is kind of telling, but trust me, there are so many other reveals jam-packed into these six episodes that you will hardly miss that one. Plus I just wanted to gift you one of my favorite lines, which was delivered with such dry wit and perfectly encompasses the plot of the series.

Set in Victorian-age London, The Nevers follows a group of people, predominantly women, known as the Touched, who suddenly manifest abnormal abilities following the mysterious passing of a unidentified flying object over the city. I know, I know, I could have just said U.F.O., but how often do you get to combine ‘unidentified flying object’ and ‘Victorian London’ in the same sentence? Among the afflicted (though they don’t think of themselves that way) is Amalia True, a quick-witted and mysterious widow who manages an orphanage for the Touched along with her best friend, Penance Adair, a sweet-natured and brilliant inventor. These two characters together are two sides of a coin. Where Amalia is reckless and quick-fisted, Penance is calculating and methodical. Their contrast makes them excellent contemporaries for one another and is a great source of bantering and bickering between the characters. Despite this, they are loyal to one another and committed in their mission to protect their kind.

This mission is complicated by the ever-growing prejudice against the Touched, which is evident from the opening scenes. They are ostracized and ridiculed, and that is the more civilized response. In fact, when we meet our heroes they narrowly escaped being abducted by a group of Purists looking to rid the world of the Touched. I must say that this theme of the series is very resonant with reality regarding humanity’s tendency to fear and want to destroy anything that is different. That’s not me getting political, just merely pointing out how the series addresses real-life themes.

Further complicating matters are the aristocracy, who view the Touched as a threat to the status quo, something that they cannot under any circumstances allow to be threatened. Miss True and Miss Adair can only rely on each other to protect the Touched from the world. Or does the world need protection from the Touched?

The thing I loved most about the series were the characters, who are complicated and well-defined. Take Amalia True; she does not fit the basic archetype of a hero. In her own words, “I drink when I shouldn’t, fight when I needn’t, and f*&$ men whose names I do not learn.” Early on, it is clear that the role that she inhabits was forced upon her, and while she does the job without complaint, she also makes it abundantly clear that she is not the right woman for the job. For me that made her quite possibly the most interesting of the characters and made me curious to learn more about her backstory, which fortunately we do before season’s end. Granted it does seem a bit farfetched in areas, but all in all, it gave great understanding for what this character struggles with every day. Then there is Penance Adair, the light to Amalia’s darkness. While some may categorize her sweet nature as naivety for how the world actually is, she also performs a very important job of balancing out the Amalia character. For where there is dark, there must also be light. And while she may have a bubbly personality, she is not afraid to speak her mind and stand up for what she believes in, even if it means being at odds with her best friend.

I could go on all day about the characters, because as I said, this show has some really great ones, and they all bring something quite unique to the story, but that would probably make this review ten pages long. However, I do want to take about one of the series’ antagonists, Maladie. While played up as a serial killer driven mad by her ‘touch,’ she is much more than meets the eye. With each progressing episode, she plays up her insanity, but in her case there truly is a fine line between genius and insanity, as she manages to pull off quite a clever scheme, that if I’m being honest, caught me off guard.

In regards to storytelling, despite only being six episodes, I felt like I got such a story in that limited time. Each episode was like a mini-movie that fed into the next episode succinctly. One of the best episodes was “Undertaking,” which addressed the team investigating the murder of one of their own and culminated with a twist regarding those responsible. There was a lot of emotion in this episode, ranging from guilt to despair, loneliness, and heartbreak. Another attribute of the series that was unexpected, but enhanced the show for me, was how witty and funny it could be at times. That infusion of lighthearted comedy is what put the show over the top in my opinion.

In summation, I absolutely loved the show and wholeheartedly recommend watching it. There were some many layers and elements to the show. If you like mystery, science fiction, fantasy, or period piece drama, this show can facilitate your desire, much like a certain private club depicted in the series.

Jeremy Butler is a film school graduate of the International Academy of Design and Technology. He is been writing for Upcomingdiscs since 2012; however, movies have played a big part of his life for much longer. Favorite genres include horror, science fiction/fantasy, and comedy. Favorite movies are V for Vendetta, Boondocks Saints, Kiss Kiss Bang Bang, and The Godfather.
Fried Barry (Blu-ray) Halloween Kills