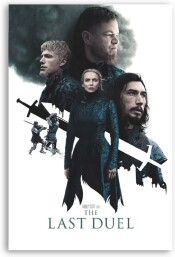 Totally immersive, the movie The Last Duel takes you into 14th century France where it deals with wars, the plague, and an economical decline for the kingdom.  Entwined, during that period, is a true story of misogyny, a power struggle, and a rivalry between squires. Powerful acting, direction, and cinematography deliver a compelling story that makes the two and a half hours fly by. In the 1300’s Europe has been wrecked with war and plague, and France has had a good share of the death and destruction. As the story begins, find notable squire and knight Sir Jean de Carrouges (Matt Damon) returning to his castle from a vicious battle in defense of his king. Having lost his wife to the plague, he marries Lady Marguerite de Carrouges (Jodie Comer), the daughter of a landowner with a vast amount of territory.

Equal in station to Jean de Carrouges, Jacques Le Gris (Adam Driver) has fought alongside Sir Jean and is welcomed by the court of King Charles VI (Alex Lawther). With the backing of Sir Pierre d’Alencon (Ben Affleck), a favorite of the king, Le Gris underhandedly receives the title of Captain over rightful candidate de Carrouges.

The players are all set, and so begins a sordid tale that includes the rape of Marguerite and a trial of the ages. Director Ridley Scott holds back nothing when it comes to war, showing the explosive battles between invaders and the Romanesque realm of King Charles VI.  The fighting is loud and violent as men on horseback and ground troops clash to a bitter end while the blood flows over their armor. Close-ups of the punishing blows show the power of the two armies as they hundreds die lying out on the gore-soaked ground.

Scott doesn’t stop there. He then takes his audience into the dank castle of Jean de Carrouges, showing a carnal rape in three repeating scenes. Each of the scenes are a view from each of the characters involved, and Scott shows their testimony in a repetition of the crime. After the audience gets the whole back story, the 60-minute finale that encompasses the trial and the duel between Le Gris and de Carrouges takes on an air so gripping that it’s well worth the wait.

The cast is superb in their very difficult roles. Matt Damon plays the scar-faced squire Jean de Carrouges, a man who’s beaten down by long and distant battles. Valiant with victories, he’s a favorite of King Charles IV, but there are jealous equals who would like to see de Carrouges fail. Those who would covet his worth, wife, and station are his enemies.

As de Carrouges’s lovely wife Marguerite, Jodie Comer does a terrific job of depicting the woman who finds herself married to a famous squire who is loved by many. Quickly devoted to Jean, she hopes to replace the wife and child he lost to the plague. When she comes under scrutiny due to accusations of rape, she fights back against her rapist even knowing it could mean her own life if she loses the trial. Her performance should be considered for Oscar honors.

As the adversary of de Carrouges, Adam Driver pulls off a real “Simon Le Gris”, using his station in life to abuse women and even joining Sir Pierre d’Alencon in a group sex-fest. Pushing his way into Marguerite’s castle, he threatens her before assaulting the hapless woman.

De Carrouges’ other nemesis, played by Ben Affleck, has the ear of the king, and his jealousy of de Carrouges leads him to defending Le Gris. The very cagy Pierre d’Alencon has lifelong reasons for wanting de Carrouges’s death, and he’ll try anything to see him lose in trial and in the arena.

John Delia has been on all sides of the movie business from publicity, writing for publications and on line blogs, script writing, to film making. Writer, critic, film editor he has worked as a film critic on this second go around for 14 years. He earned his Bachelor’s degree at the college of Journalism and Communications at the University of Florida in Gainesville, Florida. John is an active member of the Southeastern Film Critics Association (SEFCA) . Favorite Films: Lord of the Rings/Hobbit trilogies, The Godfather trilogy, the Indiana Jones trilogy (I didn't like the 4th), The Avengers and for TV it's Game of Thrones. As for animation it's a tie between anything Pixar and everything Hayao Miyazaki.
The Flash: The Complete Seventh Season (Blu-ray) The Stand 2-Pack