Posted in: Disc Reviews by Gino Sassani on October 20th, 2021 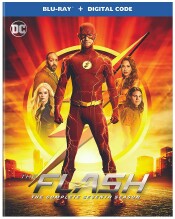 “Scared yet? You should be.”

There have been a ton of changes in the Arrowverse that started in 2012 with the CW premier of Arrow. It told the story of Oliver Queen, The Green Arrow. Other shows and heroes were added along the way that included time-traveling heroes of The Legends Of Tomorrow, Supergirl, Black Lightning, Stargirl, and most recently Batwoman and Superman and Lois. But the best of these Arrowverse shows has always been and continues to be The Flash. But a lot has changed since then. The mothership, Arrow, has been gone for two years. Supergirl ended last season along with Black Lightning, and Legends Of Tomorrow appears to be fading fast in just plain silliness. Too bad DC doesn’t own the rights to Howard The Duck. He’d fit right in. Of the new shows, Stargirl shows a lot of promise with a pretty solid ensemble. Batwoman, for so many reasons, is a complete mess, and Superman & Lois looks to be the most promising future of the Arrowverse. The jury is still out after only one season. But The Flash remains the touchstone of quality in this collection and is now the longest running of the entire franchise. There’s a reason for this, and Season 7 will give you even more reasons to run toward The Flash. However, if you’re thinking of joining The Flash for the first time in Season 7, that’s not going to work out so well for you. Hopefully you’re a speed watcher, because you have 6 to go. You’re going to love what this series has cooking, but you need to start with getting yourself caught up in order to fully appreciate what is in store for you here. In addition to the many seasons, crossovers, and other shows, COVID has reared its ugly head and kind of mixed up the order of some things. That means you’re not really getting Season 7 from the beginning when you buy this set. You’re getting the last three episodes of Season 6, and Season 7 starts on the fourth episode and gets a bit truncated by the shorter production schedules. That’s a lot to get caught up with, so check out our reviews of the previous releases here.

“And now for my greatest trick yet: absolute suffering.”

And that’s what happened to the world. Before the sixth season could be finished, the production was closed down because of COVID. It’s a story you’re reading on pretty much every series and film production that happened to be ongoing when everything went to hell. That means the first three episodes on this release finish the Season 6 story arc of Eva (Dor) and her attempt to replace humans with her mirror copies and take over the world. She’s defeated in a disappointing way. It’s straight out of Captain Kirk talking evil machines into destroying themselves. I suspect it would have been more evolved if not for the shutdown. So if it all seems rushed, it probably was. Another holdover from the previous season was Barry trying to get back his powers. They finally find a solution, but it requires Nash Wells (Cavanagh) to give up his life and all the other versions of Wells in his head. It also caused another problem that would become the “big bad” of the seventh season. When they did the experiment, they sent four offshoots of energy that created four force powers, each from a different realm.

The first they encounter is The Speed Force (Harrison), represented by orange lightning. She comes in the form of Nora and causes some issues of trust with Barry. Next it’s the Psych as the Sage Force (Esmer), who is represented by purple lightning and has the ability to put a person into their own nightmares. Then there is The Strength Force, which first appears as a real horrible CGI Hulk-like creature that’s some of the worst CG I’ve ever seen. It took over an episode for me to learn it was a she. That one is represented by blue lightning. Finally the fourth force is The Still Force, which has control over time itself. Through several episodes we encounter a kind of Force Civil War, where we never know which are bad guys and which are good guys.

Meanwhile there are other character-driven events going on. Cisco (Ramon) leaves the series midway through. His departure was actually in the works for over a year. It’s the reason that Chester P. Runk, played by Brandon McKnight, joined the show with pretty much the same skills as Cisco. Caitlin Snow and Killer Frost, both played by Danielle Panabaker, get split physically from each other. Caitlin wants to put them back together, but Frost isn’t so sure. But she gets framed for murder and ends up arrested for that and other crimes she has committed. This leads to the introduction of  Kristin Kramer, played by Carmen Moore. She’s sent by the Governor to reign in the metas in Central City and appears to have a real vendetta for Frost. She’s working with Joe (Martin), and he sees good in her but also uncovers some pretty dark secrets.

Arrow may be gone, but David Ramsey has kept himself quite busy as Diggle. He’s shown up on pretty much all of the shows this season, and that includes The Flash. Thus begins the third and final arc of the seventh season, which involves the supervillain Godforce. This is a call for all of the speedsters from all times and places. In fact there are just so many people zipping around in this arc that it just isn’t special anymore, and I found this to be the weakest of the show’s story arcs from the entire series. It ends with, would you believe, a light saber battle. There isn’t a cliffhanger here, and you get the idea that it was written so the show could end here if it needed to. That won’t be the case, and The Flash is already back for more.

The Flash is presented in its original broadcast ratio of 1.78:1. The 1080p image is arrived at with an AVC MPEG-4. Colors are bright in this high-definition image presentation. You’ll find wonderful sharpness and detail. The lightning effects are brilliant and bold. The streaks are always a treat. Contrast truly stands out with the addition of characters of Dark Natures.. Black levels are as good as the broadcasts ever were.

DC Fandome – The Flash Watch Verse: (33:52) This is DC’s answer to no ComicCon this year. It’s a virtual get-together of cast and crew from their own homes.

The Journey Ends – Carlos And Tom: (9:41) It’s a sendoff to these characters and actors, but I suspect both will be back.

This series still has a lot of gas left in the tank. The wonderful actors and characters keep it all so interesting. This season wasn’t its best, and things kind of got a little out of control, but I think this core of characters will be around for at least a couple more years. They managed to navigate the pandemic better than most productions, and in today’s reality, “That’s the strongest superpower there is.”

Gino Sassani is a member of the Southeastern Film Critic's Association (SEFCA). He is a film and television critic based in Tampa, Florida. He's also the Senior Editor here at Upcomingdiscs. Gino started reviewing films in the early 1990's as a segment of his local television show Focus. He's an award-winning recording artist for Omega Records. Gino is currently working on his 8th album Merchants & Mercenaries. Gino took over Upcomingdiscs Dec 1, 2008. He works out of a home theater he calls The Reel World. Favorite films: The Godfather, The Godfather Part II, The Body Snatcher (Val Lewton film with Karloff and Lugosi, not the pod people film), Unforgiven, Gladiator, The Lion King, Jaws, Son Of Frankenstein, The Good, The Bad And The Ugly, and Monsters, Inc.
Inglourious Basterds (UHD Blu-ray) (4K) The Last Duel