Posted in: No Huddle by Jeremy Butler on November 20th, 2021 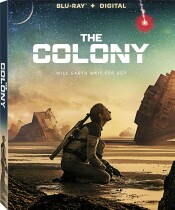 When it comes to dystopian-type films, it is very difficult to break ground. In the span of cinematic history, we have seemed some good ones (Mad Max, Snowpiercer), and we seen some bad ones (Chaos Walking, Battlefield Earth). Unfortunately, I would have to rate The Colony (a.k.a. Tides) in the latter group rather than the former. Simply put, there just wasn’t anything about the film that resonated with me. Many of the plot themes felt recycled and predictable. The story follows an astronaut returning to Earth to determine whether it is habitable following years of climate change, pandemics, and war that have decimated the planet. Upon arrival, she immediately finds herself captured by those left behind on the planet. So apparently the planet was not that inhabitable to begin with. Around this time the film started to give me The 100 vibes. The story does throw in a new wrinkle with the subplot that the colony living in space has become infertile due to what I assume were atmospheric conditions. To that end, this idea does present an interesting angle and serves as the overall motivation for our lead character’s return to earth. That said, it still was not enough to make the story very compelling.

On one hand, the idea does create a plot device that aids in moving the story along, as well as creating desperation for the characters, as they show the lengths that they are willing to go to in order to combat their own extinction. However, this idea in itself is not a new idea. Anyone recall a film called Children of Men? That was very similar circumstance. However, not to simply focus on this angle, I feel the need to point the film’s usage of the red herring concept. Not to give too much of the storyline away, but as things progress it becomes evident that things aren’t what they appear long before the twist reveals itself. I just remember sitting and watching, and I instantly knew that what was perceived as the lead character’s salvation would eventually reveal itself to be more of a damnation.

Speaking of the lead character, I will say that she was probably the most intriguing element of this film. Despite being hindered by a story lacking originality, Nora Arnezeder’s Blake showed herself to be a truly adaptable character. This is evident by her ability to somehow maneuver her way into a power position, despite becoming a captive not once but twice. Another key attribute of hers was her determination. As mentioned, the character spends the bulk of the film in captivity, but even so she is determined to complete her mission. This determination does result in a bit of a crisis of conscience when she is confronted with the harsh realities that her contemporaries intend in the name of completely the mission.

The character goes through quite the ordeal, which is what makes her without question the most intriguing aspect of the film. On top of the already mentioned circumstances, she also is forced to confront her past in the form of a ghost from it. Around this point, I started to struggle with things. It just seemed like the film was trying to infuse too many circumstances into the character. This felt somewhat unnecessary, as we were already beginning to see her waver from the path. I suppose it could be looked at like a tipping point, but to my mind, I found it to be unnecessary.

For me, the story unfolded in a really matter-of-fact tone. Despite some elements of action, I didn’t really feel that there was anything that drew me into the story. The whole thing just felt like one of those movies you have on for background noise when you have friends over. Maybe every now and then, you might look up and watch it for a few minutes. Then again, you might not.

Then there is how the planet looked visually following what is supposed to have been a apocalyptic event. The answer: it was wet. I found that to be practical, given that a majority of the planet is made up of the substance. However, even this didn’t’ give off much of a new experience, as that idea has been done as well.

Simply put, this was not a movie that I felt a real connection with. While there were a few moments of intrigue, I just didn’t find anything that held my attention for the long haul. There needed to be some new ground broken.

Jeremy Butler is a film school graduate of the International Academy of Design and Technology. He is been writing for Upcomingdiscs since 2012; however, movies have played a big part of his life for much longer. Favorite genres include horror, science fiction/fantasy, and comedy. Favorite movies are V for Vendetta, Boondocks Saints, Kiss Kiss Bang Bang, and The Godfather.
Scream (UHD Blu-ray) (4K) Batman: Year One – Commemorative Edition (UHD Blu-ray) (4K)