Posted in: Disc Reviews by Gino Sassani on November 17th, 2021 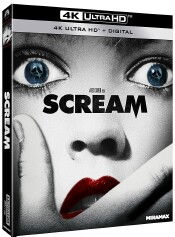 “There are certain rules that one must abide by in order to successfully survive a horror movie.”

No one knew those rules better than Wes Craven. He helped to create them, after all. Starting in 1972 with the cult favorite The Last House On The Left, he followed that just two years later with The Hills Have Eyes, which led to a sequel. But it wasn’t until a decade later that he would deliver his masterpiece and most successful franchise, Nightmare On Elm Street. Wes Craven introduced the world to Freddy Kruger, and our dreams have never been quite the same since. While others attempted to reproduce the same results with many sequels, it was Craven himself who put Freddy to bed with New Nightmare exactly 10 years after his birth. A remake never got much traction, and Wes Craven’s place in horror history was assured. In 1996 he decided to take one more stab at the slasher genre and delivered one of the best films to look directly back at the audience and celebrate the genre. Scream was another hit and another franchise staple. He took a then relatively unknown cast and made them household names with future amazing careers and decided that it was time to also poke a little fun at himself and his colleagues. The result was four films and an upcoming kind of reboot/sequel after a three-year television series examined the material. More importantly, it led to an entire sub-genre of films that include the Scary Movie franchise and others. Now, just in time for the holidays and the new film, you can see Scream in 4K with this UHD Blu-ray release.

The film advertised itself as a vehicle for Drew Barrymore and turned heads when the actress was killed in an opening scene that has become somewhat iconic. Craven and Williamson knew just how to identify an expectation and then take the audience by surprise. We never forgot Barrymore on the phone with a mysterious voice who wanted to play horror movie trivia with her and her boyfriend’s lives on the line. And who can forget tripping her up with a common Friday The 13th mistaken answer? With this scene Wes Craven has introduced us to the killer and his characteristics and put us firmly in the mood for what is to come.

“Rule number one: you can never have sex. Sex equals death, okay?”

Drew Barrymore’s Cassey wasn’t really the killer’s real target. That honor falls to Sidney, played by Neve Campbell. Cassey’s mother was killed a year earlier by a vicious madman who rocked the small town where she lived. She’s dating Billy (Ulrich), who is having some trouble respecting her sexual boundaries. The town is shocked by the murder of their classmate Cassey and her boyfriend, and the school is suffering from everything from pranksters to a glut of reporters with their cameras and microphones. Most hated among these is Gale Weathers, played by Cortney Cox. She had covered the murder of Sydney’s mother, uncovering several unflattering facts about mom and is now writing a book to exploit the crime. All of this is driving the principal, played by an uncredited Henry Winkler, crazy.

“Rule number two: you can never drink or do drugs. The sin factor! It’s a sin. It’s an extension of number one.”

Sydney soon discovers that she’s the target of the Ghost-Face Killer. It turns out this is the killer who murdered her mother a year ago, and now she’s left with the guilt that she was the key witness that put away the wrong guy and left him on death row. The film plays out in the usual chase, cat-and-mouse way you’ll find in a typical slasher film. Halloween is often referenced, and there is Randy (Kennedy) who has watched too many horror films himself so that we’re constantly reminded of the tropes that are common to these films.

“And number three: never, ever, ever under any circumstances say, ‘I’ll be right back.’ Because you won’t be back.”

The film is populated by characters who are more than fodder for the killer. There’s the whodunit factor going on, and they are more entertaining so that you actually start to have fun with these people before they get it or perhaps are revealed as the killer.

Neve Campbell has roamed around television for a while, but Scream really put her on the map. She’s one of the more complicated final girls in a horror film, and she was intentionally made to remind us somewhat of Jamie Lee Curtis. She gets to do far more than just flee from the killer, and she’s given far more intelligence than final girls often have. When Courtney Cox came here, she was two years into her Friends gig, and it didn’t yet have any of the fame it would eventually gain. Her addition here was a clever snarky Lois Lane, and it added yet another new element to the genre and some real nice winks to the audience. You gotta love the idiot-with-a-heart-of-gold deputy played by David Arquette. In this defund-the-police movement, he’s the kind of cop we all wish served in our town … just as long as we weren’t really counting on him to protect us from any bad guys. It’s his best role, in my humble opinion, to this day. Finally, how about making The Fonz a put-out high school principal. I don’t know who came up with that, but it was pure genius. A genius not really understood as much 25 years later.

You can’t deny Scream’s place in horror history. Wes Craven proved he still had some gas after Freddy and that he’s very willing to poke holes in his own sacred work. If you haven’t seen it, where have you been for 25 years?

Scream is presented in a somewhat modified 2.35:1 as opposed to its original aspect ratio of 2.39:1. The ultra-high-definition image presentation is arrived at with an HEVC codec at an average of 50 mbps. There is no question that the film shows its age a bit. There are some soft image moments, particularly wide shots. But this was shot on 35mm film, so it has that native 4K thing going for it. Black levels appear to be nudged just a bit, which gives us some clearer shadow definition. That’s important during the climax of that opening scene when Drew Barrymore is running from the killer. There’s far more detail present than I recall seeing even at the theatre. The film retains a bit of grain and continues to be quite atmospheric. Colors aren’t really popping here, but did they ever? Facial detail is improved, and that adds somewhat to the performances.

The DTS-HD MA 5.1 track is basically the same as the previous Blu-ray release. I didn’t catch any significant changes. The expanded bitrate allows for some deeper subs, but it’s not really changed at all. Dialog comes through just fine. The score offers its nice ups and downs, and it’s all certainly clean and crystal clear.

There is an Audio Commentary from director Wes Craven and writer Kevin Williamson which is also taken from a previous release but worth maintaining here.

There is only one new extra and no Blu-ray copy of the film. The new extra is:

A Bloody Legacy – Scream 25 Years Later: (7:29) Cast and crew of the upcoming film talk about the impact of the original on their careers. This includes some cast members who are returning from the original film(s). There are some nice tribute moments to the late Wes Craven.

There’s no question why the film is getting a UHD release now. The new film is on the way next year, and this is a good way to both develop some nice early buzz and take advantage of renewed interest. The film holds up well over the years and is worthy of the upgrade whatever the reasons. What do I really think? “It’s a scream, baby.”

Gino Sassani is a member of the Southeastern Film Critic's Association (SEFCA). He is a film and television critic based in Tampa, Florida. He's also the Senior Editor here at Upcomingdiscs. Gino started reviewing films in the early 1990's as a segment of his local television show Focus. He's an award-winning recording artist for Omega Records. Gino is currently working on his 8th album Merchants & Mercenaries. Gino took over Upcomingdiscs Dec 1, 2008. He works out of a home theater he calls The Reel World. Favorite films: The Godfather, The Godfather Part II, The Body Snatcher (Val Lewton film with Karloff and Lugosi, not the pod people film), Unforgiven, Gladiator, The Lion King, Jaws, Son Of Frankenstein, The Good, The Bad And The Ugly, and Monsters, Inc.
Candyman (2021) (UHD Blu-ray) (4K) The Colony (Blu-ray)