Posted in: Podcasts by Gino Sassani on December 9th, 2021 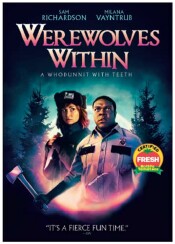 RLJE Films has just released their lycanthrope horror/comedy Werewolves Within on Dec 7th. It’s a rather unique take on the often tired werewolf story. I had the chance to talk to the film’s director, Josh Ruben. Josh took time out of his busy holiday schedule to talk about the film. I found his insights rather interesting, and I think you might agree. You won’t need a wiretap warrant to eavesdrop on the call. Bang it here to listen to my chat with Josh Ruben.

Gino Sassani is a member of the Southeastern Film Critic's Association (SEFCA). He is a film and television critic based in Tampa, Florida. He's also the Senior Editor here at Upcomingdiscs. Gino started reviewing films in the early 1990's as a segment of his local television show Focus. He's an award-winning recording artist for Omega Records. Gino is currently working on his 8th album Merchants & Mercenaries. Gino took over Upcomingdiscs Dec 1, 2008. He works out of a home theater he calls The Reel World. Favorite films: The Godfather, The Godfather Part II, The Body Snatcher (Val Lewton film with Karloff and Lugosi, not the pod people film), Unforgiven, Gladiator, The Lion King, Jaws, Son Of Frankenstein, The Good, The Bad And The Ugly, and Monsters, Inc.
The Haunting of Bly Manor (Blu-ray) Creepshow Season 2 (Blu-ray)