The Haunting of Bly Manor (Blu-ray)

Posted in: Disc Reviews by Brent Lorentson on December 8th, 2021 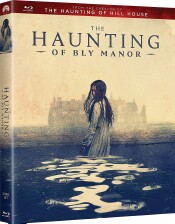 When Netflix released The Haunting of Hill House, I fell in love with the series. I have watched it several times since its release, and it continues to hold up. So when it was announced that Mike Flanagan would be returning to do a follow-up series, it was impossible not to get my hopes up. Mike Flanagan is perhaps the best thing to happen to horror in quite a while. He doesn’t depend on gore or crazy special FX, but instead his focus is more on that natural evil that people can do to one another. From Hush to Doctor Sleep to The Haunting of Hill House and his most current work Midnight Mass and all his projects in between, he’s maintained a consistency that I feel ranks him as one of the better visual storytellers of the past decade, and he seems to only get better with each project. With that being said, when I first watched The Haunting of Bly Manor when it first streamed last year, I have to admit I was a little disappointed. Sure, I could acknowledge that he had crafted a good story around the work of Henry James (The Turn of the Screw), but I just didn’t expect it to be more of a gothic romance than a horror story. Now a year later and knowing more what I was getting into, how did the story fare upon a second visit?

The series starts off at a rehearsal dinner for a wedding. A guest, played by Carla Gugino, decides to tell the soon-to-be bride and groom along with some other guests a little ghost story. The story that unfolds is about Dani (Victoria Pedretti), an American who is taking an extended vacation to London and applies to be a caretaker of two young children who live at Bly Manor. When we first see the manor, it looks like what you’d expect an old haunted mansion should look like, with a fog that seems to surround the property at all times. It even comes with a creepy-looking pond. The first episode does a good job of setting up the story. We know Dani is haunted by a mysterious figure she sees in reflections, and then there are the children, Miles (Benjamin Evan Ainsworth) and Flora (Amelie Bea Smith), who are equally adorable and creepy at the same time. Then there is the rest of the staff of the manor, Owen (Rahul Kohli), Hannah (T’Nia Miller), and Jamie (Amelia Eve). Sure, there are other characters, but these are the core members of the story, and they are each given some well-written character arcs that are engaging enough that the horror elements really are not even needed to keep the story interesting.

When it comes to Miles and Flora, granted they come off as simply creepy kids because of their environment and the situation of losing their parents, but thankfully we get more range with the performances. For the young age of the kids playing these parts, it’s commendable what we see of them on screen, but one thing I had an issue with is how sporadic their mood swings would be. Miles could simply be a charming kid one moment, and then suddenly he could be in a violent tantrum. As for Flora, she could be sweet one moment, then suddenly be staring into space or seeing ghosts, and then flip back to being sweet. Sure, as an audience we get that they have been through a lo,t but it’s almost as if had they simply talked to Dani or any of the other characters in the manor, couldn’t a lot of the grief have been taken care of?  Like with the mysterious lady tracking muddy prints through the home; there are plenty of times where they could say, “Look, it’s a ghost or whatever, but not us.” I mean, there is literally a moment where all a character needed to do was turn around, and poof, problem is solved, but instead they would rather take the blame. Sure, that means the story can’t last the whole nine episodes, but it is problematic.

Then there is Dani. While I do love this character and feel Pedretti did a great job with the material, the explanation behind who she is seeing in the reflections is a bit underwhelming, and it’s a bit hard to believe it would scare her so much given how often it seems to occur.  Again, I understand it’s about building tension, but when we discover who it is, well, it just isn’t very scary at all, and I wish it was used more for her coping with her issues than anything.

As the show goes on, we are given more couples who have experienced love in the manor, and their ghosts haunt the grounds, but none of the stories really made an impression, and it just makes it clearer that this series isn’t so much a ghost story but a tragic love story.

That brings me to the best part of this show, Dani and Jamie. The relationship that develops between these two is filled with a range of emotions, and it’s done so well and performed so well that I can almost forgive how I was expecting a horror story but instead got a charming romance. Then there is Owen and Hannah, the cook and the main caretaker of the manor. These characters have a beautifully nuanced relationship that is so well performed by Kohli and Miller that they almost steal the show. In Episode 4 we see these four characters shine the most as they open up themselves to us, each having their moment around the bonfire in a scene in which it’s not just the dialog but the unspoken performances that really make an impact.

The cinematography and the set design are beautifully on display and help to make the story work.  The Manor is a character on its own, and how the camera beautifully captures the interiors and exteriors and the subtle moments with the characters makes this such an engaging experience.

There is more that I can say about this, but I really don’t want to spoil the experience for anyone. Is this as good as the Haunting of Hill House?  No, but I feel it’s good in its own right and, well, Hill House is simply a rare treasure where everything just came together perfectly. If you enjoy a good love story with a bit of a spooky atmosphere, then this is something I feel you can enjoy as long as you realize this isn’t going for scares as much as it aiming to tug at your emotions.

The Haunting of Bly Manor is presented in the aspect ratio 2.00:1.  The 1080p image is arrived at with an AVC MPEG-4 codec at an average of 34 mbps. I like the gloomy, dreamlike look of this series. There is enough saturation to give it a distinct look, but there are moments where colors look vibrant, for instance the roses that Miles gives Dani.  The picture quality is excellent when it comes to the details in the home and the clothing the characters are wearing. At times it may be a bit over-lit for the nighttime scenes, whether in the house or the exteriors, but it fits the tone of the series and can be easily forgiven because of the dreamlike essence of the story.

The 5.1 Dolby track is a big factor in what makes this film work, from its creepy ambiance to the wonderful score that the Newton brothers composed for the film.  The dialog is clean and clear throughout, but it’s the foley work that gives the film the nice haunted-house vibe that is needed to pull off creating the atmosphere.

(There are three audio commentaries; they offer plenty of insight into the original story and the making of the show. Really only worth it for those who really loved the series and wanted to know more inside info on the making of it.)

Home For the Haunted: The Ghosts of Bly Manor: (11:45)  Don’t watch this before seeing the entire series. This gets into heavy spoilers about all the ghosts of Bly Manor and the distinct look they have.  It’s a fun and insightful feature to watch after you’ve finished the series.

Welcome to Bly Manor: (11:15) This gets into the FX that brought the manor to life. I was surprised to see the house never existed and was created from a blue screen.

While this is certainly a fun and binge-worthy series, it just doesn’t have the same punch that Haunting of Hill House or Midnight Mass carry. Still, this is better than a lot of shows out there, but this one could have been 2-3 episodes tighter and been better for it.

Brent Lorentson is a horror writer and film critic based out of Tampa, Florida. With a BA in Digital Film, he co-wrote and co-directed Scavenger Hunt. His short stories have appeared in various horror anthologies. In 2019 his short script Fertile Blood will be a part of the anthology horror film Slumber Party. He is currently working on his first novel A Dark and Secret Place set to be released in late 2019. Favorite Films: Taxi Driver, Fight Club, I Saw the Devil, The Wild Bunch, Dawn of the Dead, A Clockwork Orange, Pulp Fiction, Heathers, The Monster Squad, and High Fidelity.
House Of Gucci Exclusive Interview With Josh Ruben, Director Werewolves Within