Posted in: Disc Reviews by Brent Lorentson on December 10th, 2021 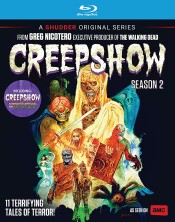 Over the past decade we’ve seen a resurgence in reboots, remakes, and anthologies, so it isn’t much of a surprise that the beloved horror anthology Creepshow would get the reboot treatment. To be fair, this is an extension from what the first films set out to be, though the big difference is that instead of just being a film with a few stories, it is now a TV series, each episode containing two tales to horrify and entertain.  When I first heard about the series I was cautiously optimistic. The first two films I consider classics, as do many other fans of the horror genre.  Then there was that third Creepshow that I feel we all just want to forget and pretend never really happened. Without George Romero being around, I just wasn’t even sure I’d want to see a show that could possibly just water down everything that was great about the films and simply turn out to be a cheap imitation.  Season 1 of the series I enjoyed, and it offered plenty of promise for things to come; did Greg Nicotero and his creative team deliver?

Episode 1 starts of strong with Model Kid/ Public Television of the Dead.  I’ll just say I loved this episode.  There is a lot of heart put into the first segment about a young boy who is obsessed with all things horror and how he shares his passion with his mother who is very ill.  Everything works in this episode, and honestly I wish it was longer, because I simply wanted so much more with the story. The “horror” direction this episode takes is fun and macabre just as it should be for this series, and it definitely sets a tone.  Then there is the next segment … This episode was a blast.  Just think what could happen if the Necronomicon from Evil Dead was read allowed on a public television network, and the only person that could save humanity was Bob Ross (yes, that artist). While it may not be THE Bob Ross, we definitely get that that is who the character is supposed to be.  Even adding Ted Raimi pretty much cements this episode as Evil Dead canon.

Episode 2 dials things down a bit with Dead and Breakfast/ Pesticide. Not that these segments are bad; actually they are pretty fun, but Episode 1 simply set the bar so high that it was nearly impossible to match it.  The first segment is a fun little tale about a brother and sister played by Ali Larter and C. Thomas Howell that own a murder house that they claim America’s most notorious yet unknown serial killer slayed and killed numerous guests at the home. This one is campy and fun.  Then there is Pesticide, about a bug killer who makes a deal with the devil and has some very unfortunate consequences involving bugs. This one has a fun little nod to a certain Creepshow film involving pesky little roaches, and what surprised me was learning that the FX used in the segment were mostly practical despite looking digital.  I would have paired this segment with Episode 4’s Pipe Screams, considering they somewhat bookend themselves about greedy landlords doing shady things, and I like how the protagonists have their own moral compass of for handling things.

Other episodes include nice homages to HP Lovecraft, and one has a fun take on the vampire story; then there is Night of the Living Late Show that pretty much toys with every horror fan’s dream, the idea of being able to live and interact in your favorite horror films.  All I’ll say is that it involves an inventor played by Justin Long creating a device that injects him inside the film Horror Express, and I can’t help but wish this invention existed in the real world.

Now there are some duds in this season; The Right Snuff has some fun winks and nods to KNB and 2001: A Space Odyssey, but this just simply fell flat for me despite the decent performances from Ryan Kwanten and Breckin Meyer.  But the worst of the bunch is the Creepshow: Animated Special. I really tried with this one, but the animation was simply so bad I couldn’t finish it.  I understand the need to go to animation because the budget doesn’t allow for certain things, but the digital comic look just ruined it for me.

To close out the season, there is the Creepshow Holiday Special.  This one is a palate cleanser that had me forgetting about that awful animated episode and just laughing at how bonkers this story was.  Just imagine there was a support group called Shapeshifters Anonymous with people claiming to transform into cheetahs, pigs, and even werewolves.  I really don’t want to spoil this episode by saying anything more, but damn,;how I wish we got this as a full on movie; I absolutely had a blast with this episode and will say this episode alone will most certainly develop a cult following.

Greg Nicotero definitely stepped up and came out swinging with this second season and has shown he’s come a long way as a director.  Despite having a small budget, Nicotero and his team have delivered another successful season, and I’m excited to see what they have next with Season 3.

Creepshow Season 2  is presented in the aspect ratio 1.78:1.  The 1080p image is arrived at with an AVC MPEG-4 codec at an average of 29 mbps.  One of my only major complaints with the series is how polished it looks while at the same time looking too digital.  The image is too polished and clean, and it really takes away from the old comic book and film feel.  The color palette comes through nicely, but some of the nighttime stuff or low-lit scenes are missing a lot because it’s over-lit and we see too much. In the times where the episodes go to B&W the image looks its best, most notably in the Model Kid segment.

The DTS-HD Master Audio 5.1 track is definitely put to work in this series.  Most importantly the dialog is clean throughout, but it’s the Foley work and sound mixing that really gives the show some character and helps bring it to life.  How they blended the audio with Horror Express and Night of the Living Dead was impressive.  Then you have the work with creepy crawlies like in Pipe Screams where it balances the creep factor but also being fun; it was well done.  While it may not be the ultimate immersive experience, for what it was trying to accomplish it does a more than serviceable job.

Wondercon@Home 2021 Interview With Greg Nicotero: (38:00) This is a well done interview with one of the critics from Bloody Disgusting.  Nicotero offers up plenty of insight into the making of the series, and for horror fans this is worth checking out.

How It Was Made: Night of the Living Late Show: (7:40) An inside look with the VFX department on how they pulled off the creative FX of putting Justin Long into a couple classic horror films.

Behind The Sound With Bare Knuckles Creative: (4:08)  A look at how they create the sound FX for the series.

Behind the Scenes Raw Footage: (4:56) One of the best parts of this is seeing the practical FX used during the making of the series.

If you enjoyed Season 1, then I feel Season 2 will just be a blast for you. This hits on all the right cylinders with all the great throwbacks and homage paid to the classics of horror cinema.  As an anthology this is certainly becoming a favorite, with several episodes I feel are worth revisiting.  For those who are fans of horror, this is definitely worth checking out.

Brent Lorentson is a horror writer and film critic based out of Tampa, Florida. With a BA in Digital Film, he co-wrote and co-directed Scavenger Hunt. His short stories have appeared in various horror anthologies. In 2019 his short script Fertile Blood will be a part of the anthology horror film Slumber Party. He is currently working on his first novel A Dark and Secret Place set to be released in late 2019. Favorite Films: Taxi Driver, Fight Club, I Saw the Devil, The Wild Bunch, Dawn of the Dead, A Clockwork Orange, Pulp Fiction, Heathers, The Monster Squad, and High Fidelity.
Exclusive Interview With Josh Ruben, Director Werewolves Within West Side Story (2021)