Posted in: The Reel World by Gino Sassani on December 10th, 2021 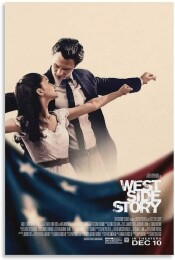 You could say that West Side Story goes back to 1957 with the iconic collaboration of composer Leonard Bernstein and the very recently deceased lyricist Stephen Sondheim. But that isn’t exactly true. The play was a modern retelling of William Shakespeare’s equally iconic Romeo And Juliet. Instead of Capulets and Montagues, we have street gangs from 1950’s New York City. All of the beats are there and then some. The legendary Robert Wise adapted the play as a film in 1961, which has deservedly gone on to classic status. And there it all sits for 60 years outside of the expected revivals and local productions of the work. Along comes Steven Spielberg who wanted to create a film as homage to his father. Their shared love of the source material here has led to a new film that is likely to captivate a new generation of fans, while also being a love letter to those of us who loved the original … including Steven Spielberg’s pop. The film is a complicated experience, to say the least. It has its shares of ups and downs, to be sure. But does it have the heart and soul of the original material. The answer is a guarded yes.

If you don’t know the story, shame on you. I had to admonish a fellow critic who came to the film having never seen the original. Fully shamed, I hope he’s corrected that oversight by now. Tony is played by Ansel Elgort. He’s a somewhat inactive member of the street gang The Jets. Gang leader Riff (Faist) is itching to have an all-out rumble with rival gang The Sharks. He wants a kind of winner-takes-all event that settles their “beefs” once and for all. He’s trying to convince Tony to support the gang and participate in the expected rumble. Tony isn’t convinced. The challenge is set to go down at an upcoming dance, where Tony falls in love at first sight with Maria, played by Rachel Zegler. Isn’t love just grand? The problem is that Maria’s brother Bernardo, played by David Alverez  is the leader of The Sharks. Just the fact that they are talking to each other at the dance infuriates brother Bernardo. Now he’s even more wanting that rumble, and he wants the Jets to make sure Tony is there, because he wants to take him out personally. The two lovers spend the next 24 hours before the scheduled fight together growing even closer. Tony convinces Maria he can stop the bloodshed, but this is after all a tragedy, and that’s not really going to fit into the template. Don’t blame me. Blame Willie S. for dooming these star-crossed lovers from the start.

The rumble goes down and ends badly for members of both sides. Now the cops are trying to round up a killer, and Maria must confront her own feelings. Can she still love Tony after the disastrous results of the fight? In the end, we never really know for sure. Did I mention this was a tragedy?

So how does it compare with what came before? Perhaps that’s not even a fair question, but fair or not, it’s how each of us who love the original are looking at the film. The first hour is pretty much a shot-by-shot remake of the original film. But there’s a ton Spielberg adds to the conversation. He’s able to use more modern film techniques and staging advantages to create much more sweeping and grand set pieces. The balcony scene and song here are a master class in staging, production, directing, and performance. It’s one of the single most captivating moments of the film and perhaps the only place where it so easily trumps it’s source material. I was quite cynical of the casting of Ansel Elgort in the lead, and I could not have been more wrong. The two create almost instant chemistry, and that’s really what drives the narrative. The stakes get so high so swiftly on a chance encounter that the only way to overcome the sheer unlikelihood of what follows is the bond these actors have to deliver. Anything less and you would be  scratching your head wondering how such a thing could lead to the tragic end to which it takes us. If you don’t believe the sheer magic of this relationship, none of the film will come together for you. I did.

After the first hour, the next 90 minutes or so drift away from the original at times,  while still staying faithful to the story and the wonderful songs. One of the most divergent moments involves Rita Moreno,  who played Anita and took home a Best Supporting Actress statue for what was an emotional character in the film and play. Here she is not nearly as important or impactful. But Moreno returns in the place of Tony’s boss, who runs a little store in the neighborhood. The role is expanded here,  and Moreno is given a song which the original store owner never had. I was ready to point out the rather huge departure until she started to sing. Some say it’s just a play on our emotions to try and get Moreno to make history by getting an Oscar for two different parts in a film and remake. They are half right. It was a huge emotional play and nearly brought tears to these eyes that never cry at films. If she ends up getting another Oscar, I’m honestly OK with that.

The production is amazing, and while I will not say it was as atmospheric as the original, it was just as immersive. Look. Robert Wise was the king of atmosphere, from West Side Story to the Karloff/Lugosi film The Body Snatcher. Spielberg wishes he could be as atmospheric. But he makes up for it with a grandness and realism that draws us in just as well if not quite as much as Robert Wise did.

The film unintentionally brings a world full circle. West Side Story was really the first production for Stephen Sondheim, and this remake will be released merely days after his passing. It was hard to hear the lyrics to such classic songs as Maria, I Feel Pretty, and One Hand One Heart knowing that the hand that penned them missed seeing all of this by just a few days. I now chose to see it as Sondheim’s most true eulogy and requiem.  Sondheim is gone, but “Tonight the world is filled with light.”

Gino Sassani is a member of the Southeastern Film Critic's Association (SEFCA). He is a film and television critic based in Tampa, Florida. He's also the Senior Editor here at Upcomingdiscs. Gino started reviewing films in the early 1990's as a segment of his local television show Focus. He's an award-winning recording artist for Omega Records. Gino is currently working on his 8th album Merchants & Mercenaries. Gino took over Upcomingdiscs Dec 1, 2008. He works out of a home theater he calls The Reel World. Favorite films: The Godfather, The Godfather Part II, The Body Snatcher (Val Lewton film with Karloff and Lugosi, not the pod people film), Unforgiven, Gladiator, The Lion King, Jaws, Son Of Frankenstein, The Good, The Bad And The Ugly, and Monsters, Inc.
Creepshow Season 2 (Blu-ray) The Addams Family (UHD Blu-ray) (4K)