Posted in: Disc Reviews by Jeremy Butler on December 16th, 2021 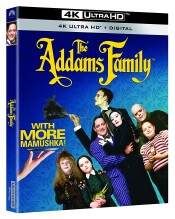 Be honest; who hears the theme music when anyone even mentions The Addams Family? I know I do, and then I have to resist the urge to do the finger snaps. Just in time for the release of the animated version comes the double release of The Addams Family and its sequel, The Addams Family: Family Values, featuring Raul Julia and Angelica Huston as Gomez and Morticia Gomez, and let’s not forget Christopher Lloyd and Christina Ricci as Fester and Wednesday Gomez respectively. Based on the wildly popular cartoons that appeared in the New Yorker that went on to find success as television series, the The Addamses are a satirical inversion of the ideal 20th-century American family.

The first film finds the family thriving, but without an essential member, Fester, who after a falling out with his brother Gomez, leaves for the Bermuda Triangle, not to be heard from for 25 years. Looking to capitalize on Gomez’s guilt over the situation is the family lawyer Tully, who is in deep to loan shark and con woman Abigail Craven. When Craven and her son Gordon, who is the splitting image of Fester, come to collect, Tully hatches a scheme to have Gordon pose as Fester to find the hidden vault where the Addams family fortune is kept.

Of the two films, this was my favorite one. It was close, as the sequel keeps a lot of the magic that made this film entertaining. However, as this was the originator for the movie franchise, I have to give the edge to this one. There was good energy among the cast. Julia and Lloyd are the main draw, as the film deals primarily with the rift between the two of them. I enjoyed that Gomez doesn’t blindly accept his brother after such a long absence; he maintains his suspicions. Also, like a good partner should, Morticia has her doubts as well, most notably during her graveyard conversation with Fester.

I will say that the plot twist at the end regarding Fester perhaps should have been addressed more deeply than a simply one-off statement explaining the confusion. I began to suspect this twist during Fester’s outrage regarding the children’s sword fight. That’s aside, that was a great scene that really cemented the cohesion of this group in my opinion. Without question, Christopher Lloyd was the main draw, but it was Ricci who was the breakout star, and excellently embodied Wednesday Addams. To this day, it is difficult for me to think of the character without conjuring a picture of Ricci in goth.

The Addams Family is presented in its original aspect ratio of 1.85:1. The ultra-high-definition image presentation is arrived at with an HEVC codec at an average of 70 mbps. The film was shot on 35mm, so maintains a native 4K source, and that makes a huge difference here. This transfer is miles ahead of the 2-disc/2-film version most recently released. This is actually a pretty rich film with lots of atmosphere. The bump in black levels is going to really bring out that deep black dress that Morticia is wearing throughout. More important is the nice texture to it all. I’m a fan of films shot on film, and that organic nature truly shines often in textures, and it certainly does here. You won’t find any print artifacts here. Colors are muted, but that’s exactly the way it was shot. They go from looking somewhat washed out to actually being atmospheric as they were intended.

The DTS-HD Master Audio 5.1 track isn’t as much of an upgrade. The audio serves the dialog quite well, and that iconic harpsichord theme is as stunning as it ever was. There’s not a lot of bottom to the audio presentation and that gives it a pretty thin sound overall. That doesn’t mean it isn’t louder. You absolutely get a loud and aggressive mix, but I don’t find any depth or subtlety here.

The only new feature is a 16-minute filmmaker’s focus with Director Barry Sonnenfeld and an extended version called More Mamushka.

An odd, wealthy, aristocratic clan who delight in the macabre and are seemingly unaware, or do not care, that other people find them bizarre or frightening. For me, these movies were my introduction to this family, as the TV series was bit before my time, but a gothic family unaware of their difference from other people — what’s not to love?

Jeremy Butler is a film school graduate of the International Academy of Design and Technology. He is been writing for Upcomingdiscs since 2012; however, movies have played a big part of his life for much longer. Favorite genres include horror, science fiction/fantasy, and comedy. Favorite movies are V for Vendetta, Boondocks Saints, Kiss Kiss Bang Bang, and The Godfather.
West Side Story (2021) Werewolves Within (Blu-ray)