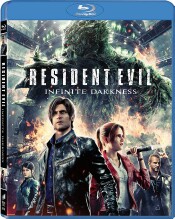 This appears to be the time of Resident Evil, it would seem. Fresh on the heels of a live-action reboot to the franchise (Resident Evil: Welcome to Racoon City) comes the home media release of this CGI miniseries based on the popular Capcom video game. If you want to be technical, the miniseries preceded the reboot, as it was originally released on Netflix back in July of 2021. Set between the events of Resident Evil 4 and Resident Evil 5, the miniseries follows Leon S. Kennedy as he attempts to uncover a conspiracy that reaches all the way up to the White House. Now, in reference to that time period, I should mention that it is the video game continuity, not the film’s, that is an important distinction, as Milla Jovovich was only loosely based on the source material. While the story does take some time to develop, by the final episode, I was fully vested in its outcome.

True to the game’s format, the story is twofold, as it follows two protagonists: Leon S. Kennedy and Claire Redfield. As previously mentioned, Kennedy finds himself entangled in a conspiracy after he is called to the White House to investigate a mysterious hacking incident, which quickly erupts into a targeted zombie attack on the institution. Recruited to investigate it, he is partnered with the enigmatic Shen May and an elite commando, Jason, who is hailed as a war hero following a mission in Penamstan. With hints pointing towards China being responsible for the attack, the team is dispatched for a covert mission. Before leaving, Leon runs into Claire, who attempts to impart a discovery to him but does not get the chance.

If only she got the chance, she could have saved him some trouble, as Claire coincidently finds herself investigating the very thing that Kennedy has been tasked to handle. While working as a aid worker in Penamstan, she’s discovered evidence of bioorganic weapons. Meanwhile, en route to China, Leon discovers that there is more to his mission than he initially thought and begins to wonder if he can trust his partners, particularly Jason, the man being heralded for heroics in the same place that Claire has discovered bioorganic weapons.

Needless to say, there are some great elements of suspense fitted into this miniseries that only has four half-hour episodes. I enjoyed the intrigue of watching Leon discover the real objective of the mission, and while I don’t fully agree with every choice he made, I can say that he was attempting to act in the interest of the greater good. To me, this storyline was the most pivotal and entertaining of the three. The other two, Claire’s and the flashback sequence, which tells the real story of what happened in Penamstan, really are second fiddle to Leon’s. Still, they are necessary, as they provide the main subplot with the necessary context. Another reason for my preference is that Leon’s storyline feels well-paced and complete, while the others feel somewhat rushed. However, given the limited runtime availability and the need to prioritize the main subplot, that is to be expected.

My competition to determine my favorite episodes was very close between Episodes 2 and 3, with Episode 3 edging it out in the end. Episode 2 was intriguing, and it gives the first taste that something is amiss with the mission and a peek at who is our big bad. That being said, the reason that Episode 3 wins out is that it has the pivotal moments that explain the conspiracy and what brought us to this point in time. Context is important thing with me, and Episode 3 is the one that gives me said context. It is also the episode that gives us a clear view of what our big bad is capable of. Needless to say, ruthless is the right word for it.

The miniseries leaves open the possibility of a continuation, and while I don’t discount the potential for such, I have my doubts that one will materialize. Though I did enjoy the series, I have the distinct impression that it is a one-off and any efforts to duplicate it will fall victim to the law of diminishing returns. I will just have to take solace that I can recommend the series to you all and will re-watch it when the need arises.

Jeremy Butler is a film school graduate of the International Academy of Design and Technology. He is been writing for Upcomingdiscs since 2012; however, movies have played a big part of his life for much longer. Favorite genres include horror, science fiction/fantasy, and comedy. Favorite movies are V for Vendetta, Boondocks Saints, Kiss Kiss Bang Bang, and The Godfather.
The Mitchells vs the Machines (Blu-ray) Scream (2022)