Posted in: The Reel World by Brent Lorentson on January 14th, 2022 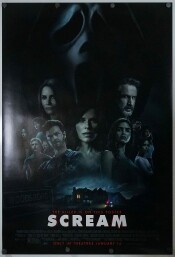 In 1996 when Scream first came out, it’s hard to explain to this new generation of teens just how much it changed the genre and the film industry. To say the horror genre was dead is an understatement. Sure, the early 90’s had a handful of good films, but when you look at where the genre was in the 80’s and earlier, you can see the difference. Then when you look at how the genre has evolved since the first film premiered, what Kevin Williamson and Wes Craven did has been emulated but not quite surpassed. Even with the three sequels that followed, they had the same spirit but just not quite as good. Sure, better horror films have come along in the 25 years since, and several have changed the genre for better or worse. We’ve seen horror go with the intense hyper realism and the re-boot which Scream 4 (2011) took its meta take on, but where could the series go next?  Honestly, when Wes Craven passed in 2015, I figured the franchise was done unless they rebooted the series from scratch with a new cast and director, but I don’t think that’s what any of the fans wanted. For the intense and loyal fans, this is a franchise  that many seemed protective over. I’ll admit to being one of them, so when the talk came of a fifth film going into development, I was just at a loss. After all, how do you replace Wes Craven? The guy is quite literally a master of horror. My first choice would have been the team behind Turbo Kid and Summer of 84 . I like their style and their love for nostalgia, but instead the studio went with the directing team of Radio Silence (Tyler Gillett and  Matt Bettinelli-Olpin) who are responsible for the insanely fun Ready or Not. So how does the new film hold up with these new directors taking a “Stab” at the franchise?

The opening takes us into some familiar territory, as we have Tara Carpenter (Jenna Ortega) as the teen who is home alone and is tormented by a suspicious caller who of course turns out to be the Ghost Face killer. This sequence sets the tone nicely and definitely is wanting to remind viewers of the first film but shows us there are going to be some modern twists along the way. No, I don’t think this scene holds up to the amazing opening of the first film, but it is definitely one of the best starts of the sequels, and the film only continues to impress going forward.

What I feel viewers should prepare themselves for is that this film doesn’t focus on the legacy characters, Sydney (Neve Campbell), Gayle (Courtney Cox), and Dewey (David Arquette). Instead this is more about injecting new blood to the series and introducing us to a new group of Woodsboro survivors. Don’t fret; our loveable trio is still around for the film, but they are definitely taking a back seat, and it actually helps the film because of this. This time around the META take on the industry has the film focusing on the “Requel”, basically a reboot that functions as a sequel. Think about Ghostbusters: Afterlife or the new Halloween films and you get a good idea about what is going on here.

Sam Carpenter (Melissa Barrera), Tara and Richie (Jack Quaid) take the helm in this film. It’s a little odd how so many people seem to be oblivious to the numerous Stab films that have been made over the years, exploiting all the killings in Woodsboro. I mean, this is a small town, and they’ve had countless serial killers, but the townspeople seem convinced they are living in the quintessential small-town USA. I’d imagine there would be murder house tours and almost having the town exploit it and make it a tourist destination, but who knows, maybe that’s the direction of Scream 6 and however many sequels will follow.

The dynamic of Sara and Tara actually works, as we see the big sister doing whatever she can to keep her little sister safe. But the guy who I came away liking the most is Richie, he and his blissful ignorance to the Stab films while his girlfriend becomes the prime target of Ghost Face. Richie is the sound voice of reason in this film, somewhat as Randy was in the first film. Quaid has made a name for himself with his role in The Boys, but this might be the role that breaks him out to be a bigger name.

As for those legacy characters, there is a lot I can say. Seeing these guys in their familiar roles just makes me happy, but it is Dewey who makes the biggest impression this time around. I always wanted a film that just focused on Dewey as Sheriff and gives him another mystery to work on. He’s the one who seems to have changed the most over the years, and the performance Arquette brings to this character is definitely his best in the series. Sydney, of course, is still tough as nails despite trying to get on with her life, and Gayle is still the eager reporter.

If I have one major complaint, it comes with the third act. The first two-thirds of this film are great at capturing the heart of the first film and giving us something new and definitely more violent, but then in the third act, they seem to decide to play it too safe.  This film definitely has some tricks up its sleeves, and I adore how it brings in characters from all the films. Seeing Deputy Hicks (Marley Shelton) was definitely nice, though I would have been ecstatic if we got to see Kirby return. But this film is definitely about setting up the next chapter for Woodsboro and where the future films can go. Easily this is my favorite sequel of the franchise, and I think many will be surprised how much fun they’ll have with this film. Surprisingly there are no stingers with this film. I figured Scream would have been the perfect film to have a little fun with this. In some ways this could be the last film of the series, but part of me knows there will always be another sequel down the road and a new person to pick up the mask of Ghost Face.

Brent Lorentson is a horror writer and film critic based out of Tampa, Florida. With a BA in Digital Film, he co-wrote and co-directed Scavenger Hunt. His short stories have appeared in various horror anthologies. In 2019 his short script Fertile Blood will be a part of the anthology horror film Slumber Party. He is currently working on his first novel A Dark and Secret Place set to be released in late 2019. Favorite Films: Taxi Driver, Fight Club, I Saw the Devil, The Wild Bunch, Dawn of the Dead, A Clockwork Orange, Pulp Fiction, Heathers, The Monster Squad, and High Fidelity.
Resident Evil: Infinite Darkness – Season 01 Billions: Season Five