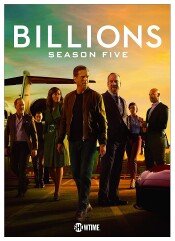 Every era has their Hollywood good guys and their Hollywood bad guys. Back in the early days, we had Nazis to pit against our heroes. When they didn’t quite fit the bill, we had the Japanese. For much of the Cold War, we had great Russian villains to test the mettle of our heroes. Terrorists fit the bill a lot today, but perhaps the only group hated by large segments of American audiences more are the 1%ers. Anyone who makes an obscene amount of money must have cheated to get there. It doesn’t hurt that financial power companies have been immersed in the last couple of economic disasters. Michael Douglas taught us that greed is good, and while every single one of us wants to be at the top, it’s not quite the politically correct thing to express … at least out loud. Billions gives us the kind of power broker who is just too much fun to hate. It’s the classic struggle of good guys versus bad guys. Of white hats versus black hats. But nothing is that simple in Billions, and if you haven’t yet spent some time with the likes of Paul Giamatti and Damian Lewis as Chuck Rhoades and Bobby “Axe” Axelrod, you’re missing one of the more compelling dramas on television right now. Get yourself caught up and join us for Billions: The Complete Fifth Season out now on DVD from CBS Home Entertainment.

Meet Chuck Rhoades, played brilliantly by Paul Giamatti. When we first met Chuck, he was the US Attorney for the southern district of New York State. In that position he loved to take down the arrogant, rich power brokers who scoffed at the laws and made their fortunes any way they could. His white whale has been Bobby Axelrod, played by Damien Lewis. He runs one of the most powerful firms in the world and makes deals of hundreds of millions of dollars like he was ordering a Whopper from Burger King. For the first three years of the series we watched this cat-and-mouse game unfold. The obsession of these two men toward hurting each other drove the drama. Stuck in the middle of all of this contempt has been Chuck’s wife, Wendy, played by Sons Of Anarchy veteran Maggie Siff. She’s a therapist who complicates the whole thing, because she works for Axelrod as his sales team inspirational coach and his own father confessor. She’s known Axelrod longer than her husband, and she’s being forced into the middle of this brewing confrontation. I have to say, I never liked Siff in Sons Of Anarchy. I always thought she was a weak character. This time I found she provides a crucial voice here that allows the show to move so effortlessly between these two worlds. This is the kind of role I wish I had seen in Sons. It’s been rather delightful watching these two powerhouses fight until it nearly destroyed them both. But now things are different.

With both men somewhat defeated, they end up forming a rather uneasy alliance. The result of these unexpected defeats has expanded the battlefield from two to four combatants now, and it only makes the series all the more compelling.

For the fourth season they were somewhat on the same side, but this year they are once again right where they belong, and that’s at each other’s throats. Chuck has won the election as the new Attorney General, and he hasn’t forgotten who his number-one target was the last time he was in a prosecutorial role. He is also now officially split with wife Wendy, and that means there’s now a war going on there. Both of our leads are fighting on multiple fronts this season. Axe is also dealing with the fallout from his detente with Taylor, who has now brought her shop as a subsidiary of Axe Capital. There’s going to be plenty of tension there, but the real new fireworks comes from Axe’s new rival Michael Prince, played by Corey Stoll. He and Axe are going to be snipping at each other all season and will even join forces with Chuck to take Axe down. Now it’s no secret that Damien Lewis is leaving after this season, and Prince is about to be the new guy going head to head with Chuck. Axe wants very much to ditch his business and become a bank, and that sets him up for the season’s big trap and reveal.

The performances of the two leads set a high bar for the rest of the cast. The chemistry and dynamic between Lewis and Giamatti is some of the best on television today. The sheer force of their wills can drive the story beyond anything any writer could put on paper. It also helps that the supporting cast contains some near-equally-great performances.

At the top of the list has to be David Costabile as Wags, Axelrod’s most trusted confidant. Wags lives in the moment. He’s irreverent and thrives as second to Axelrod. He’s the perfect second. He has no desire to be the top dog and has almost all of the perks. He’s the kind of weapon you point and shoot. He’s hands down my favorite actor/character after the top dynamic duo. This season his loyalty will be tested. He also decides to reach out to his estranged children to be a better father but finds his daughter is a stripper and his son is a born-again Christian who wants to save his soul.

Running a close second is Axelrod’s financial hit-man, Dollar Bill, played by Kelly AuCoin. He’s like a savant. He’s woefully ignorant of most of life, but he can put together a deal and fix the real-world problems with surgical precision.

Billions was hit by COVID this season, and it changed things for the show. Episode 7 was interrupted by the pandemic, and on episode 10 they deal with the fallout walking around in masks and talking vaccinations while Axe actually becomes the first major television character to catch the virus and ends up in isolation while Chuck is springing his final trap.

You get all 16 episodes on four discs with no extras. Next season will be very different, and I’m not sure how it will work without the dynamic between these strong characters. Prince will be an interesting piece, but I’m cautiously optimistic about the show’s future. Plenty of fans are already embracing the new order. “I want to cheer, too, but these circumstances feel trepidatious.”

Gino Sassani is a member of the Southeastern Film Critic's Association (SEFCA). He is a film and television critic based in Tampa, Florida. He's also the Senior Editor here at Upcomingdiscs. Gino started reviewing films in the early 1990's as a segment of his local television show Focus. He's an award-winning recording artist for Omega Records. Gino is currently working on his 8th album Merchants & Mercenaries. Gino took over Upcomingdiscs Dec 1, 2008. He works out of a home theater he calls The Reel World. Favorite films: The Godfather, The Godfather Part II, The Body Snatcher (Val Lewton film with Karloff and Lugosi, not the pod people film), Unforgiven, Gladiator, The Lion King, Jaws, Son Of Frankenstein, The Good, The Bad And The Ugly, and Monsters, Inc.
Scream (2022) Dune (2021) (UHD Blu-ray) (4K)