Posted in: Disc Reviews by Jeremy Butler on January 21st, 2022 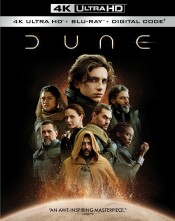 “A great man doesn’t seek to lead, he’s called to it. But if your answer is no, you’ll still be the only thing I need you to be. My son.”

Given that this was most likely the most anticipated movie of 2020, I must say that I expected much more from it. Especially given the who’s who list of Hollywood stars who were brought together for this production. Names like Timothee Chalamet, Zendaya, Jason Momoa, Oscar Isaac, Rebecca Ferguson, Josh Brolin, and the list goes on. I suppose another thing that somewhat worked against the film was the long wait, as this was a movie that was slated for a year earlier, and then the pandemic complicated that, so anticipation for this film was high. Not to mention that this is a reboot of a beloved series that has already been adapted and garnered a large cult following. It is also my understanding that previous adaptation had the benefit of having the creator of the franchise on set to help guide it. That sounds like a recipe for success, if you ask me. Here we have the re-imagining of an idea with a very loyal fan base, which is always a dangerous undertaking. However, Denis Villeneuve’s proven resume with thrillers such as Prisoners and Sicario, as well as his work in the science fiction genre with Arrival and Blade Runner 2049 (which also was based on another classic film) suggested that he was uniquely up for the task of taking on a film such as this. While I did enjoy what Villeneuve created visually, my big issue was with the story, specifically, the fact that it was clearly incomplete.

To put plainly, Dune very clearly felt like half a movie. So imagine my surprise when I do further research (admittedly, I probably should have done this research in preparation for the film, but I lacked the time) and discovered that this film was only roughly half the plot of first novel. Simply put, the plan was for the first novel to be broken into two movies. I have one mere question regarding that. Why? Aside for the obvious ploy of ensuring that the audience comes back for more, for me this seems like a flawed business strategy. On the one hand, speaking from a business standpoint, for this plan to work, the film has to garner a good deal of success box-office-wise. Given its same-day release on the Warner Bros. streaming app, it already seems like the potential for a record-setting weekend is low. Secondly, in order to ensure that the audience returns for a second movie, you have to give them enough to hook them so that they want to come back for more. I’m not sure that was accomplished. More than anything, I just felt cheated when I left the theater. I’d invested a great deal of time (nearly three hours) into this film, and I don’t really feel that I learned much. The deeper aspects of the film, such as Paul’s destiny and the forthcoming war, were just kind of hinted at. They just got teed up, but I definitely emerged from the film with more questions than answers.

I won’t speak for everyone, because I’m sure avid fans of the franchise most likely did not feel cheated, because they have some knowledge of what is coming next. However, for someone like me with limited knowledge of this franchise, I’m not sure what there is to compel me to invest any more time in the franchise. There is also the fact that the film is more politics than anything else. Based on conversations I’ve had with friends who are fans of the series, I understand that is pretty much on par with the books. I understand, and I give the film credit for respecting the source material, but the point of a film is a visual representation of the book. I just would have like to have seen more action. The film is basically all talking with brief scenes of action peppered in. I will say that I thoroughly enjoyed the action that I did get, especially the fight sequences involving Jason Momoa, who was also the most compelling member of the cast in my opinion.

Another thing that irked me was that the film left certain characters’ fates, one big one in particular, somewhat up in the air. I don’t want to give too much away, but I vividly remember leaving the theater realizing that I didn’t remember what happened to him. He was there throughout the film, and it was part of a big action sequence, but I don’t recall what happened to him. I don’t think I missed it, but perhaps it is something that is addressed in the next installment.

Speaking of the next installment, that is something I am very curious about, because as it stands, there does not appear to be any confirmation that it has been greenlit. That tells me that its fate is dependent on the reception of this first edition. I find that to be a risky way to do things. I understand that such a thing has worked for other franchises such as Twilight and Harry Potter, but a key takeaway with those was the fact that they waited until the final film to do a two-parter. Doing it this way seems backwards. I would have expected the crew to build the intrigue first and then try to keep them coming back for more.

Dune is presented in its original aspect ratio of 2.39:1. The ultra-high-definition image presentation is arrived at with an HEVC codec at an average of 60 mbps. There’s going to be some grumbling over the aspect ratio. Some of the film was in IMAX format, and those areas are not represented here. The image presentation decides to stick to a steady aspect ratio here. The good news is that the digital source material was often shot in 4K, so this is not so much of an upconvert. Most of the image is rather misty, and that could be problematic, but you’ll find there’s plenty of detail and sharpness so that the important stuff does cut through the stylistic “noise” and allows for wonderful clarity. There’s also a lot of texture here, but the CG material doesn’t always hold up quite the same. I suspect some of that was rendered in 2K, and it stands out as not near so sharp and detailed. Black levels are above average, and the location shots allow a nice epic feel to the whole thing.

The Atmos track defaults to a really solid 7.1 mix. I like the immersive quality here. The surrounds aren’t aggressive, but they bring in a lot of subtle nuances and fill the landscape quite nicely. The swirling winds of the sand and other bits of ear candy put you solidly in the middle of the film. The action sequences bump up the subs and bring some nice room shakes at times. The score finds its place and doesn’t dominate except during those emotional or action beats. Dialog comes through throughout.

The extras are all on the Blu-ray and amount to a lot of mini pieces about the film. It’s very confusing with some extras appearing to show up twice.

While the film did feel like half a movie at best, I do hope that the second installment does get greenlit, if only so I can get some of the questions that I was left with answered. I don’t like leaving things undone, so I will without question go to see it in the event that it goes forward. I will say that with the way the film teed up this great war and Paul’s overall destiny that the second installment has it work cut out for it, because I am expecting an epic tale.

Jeremy Butler is a film school graduate of the International Academy of Design and Technology. He is been writing for Upcomingdiscs since 2012; however, movies have played a big part of his life for much longer. Favorite genres include horror, science fiction/fantasy, and comedy. Favorite movies are V for Vendetta, Boondocks Saints, Kiss Kiss Bang Bang, and The Godfather.
Billions: Season Five The Dry (Blu-ray)