Posted in: The Reel World by Gino Sassani on February 7th, 2022 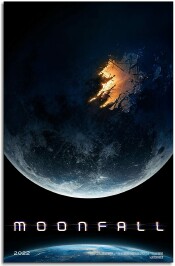 In the 1970’s Irwin Allen went from doing campy television science fiction shows like Lost In Space, Voyage To The Bottom Of The Sea, and Lost In Space to becoming the king of the disaster movie. From The Poseidon Adventure to The Towering Inferno, Allen brought us to the brink of disaster time and time again. While others have followed in his footsteps, no one has taken that genre to heart as much as Roland Emmerich. Films like Independence Day and The Day After Tomorrow filled our screens with technology that Irwin Allen could only dream about. But Emmerich worked best when he was partnered with Dean Devlin. Since that collaboration ended it appears that Emmerich has been in a kind of a rut. That wouldn’t be so bad, because he knows how to put a big budget film together and give us a lot of bang for our buck with milestone f/x and mind-blowing set pieces. But it appears that a lot of that luster has been eclipsed by his latest sci-fi/disaster entry, Moonfall.

Moonfall begins familiarly enough for Emmerich fans with a rather eccentric “professor” who appears to have made a breakthrough discovery. He has learned that the moon’s orbit is shrinking and bringing it closer and closer to Earth until eventually it will rain fire and brimstone down on our hapless planet. Of course, no one will believe him, and NASA has stopped taking his calls. Most of the problem is that he has for years been associated with a theory that the moon is actually an ancient alien construct and not a natural celestial body at all. It’s the part played on Independence Day by Jeff Goldblum and on Stargate by James Spader. Here he’s KC Houseman, played by John Bradley. He eventually gets the attention of washed-up astronaut Brian Harper, played by Patrick Wilson, who experienced something a few years ago on a shuttle mission that no one believes happened. At the heart of both of their problems is a black wave of material that is somehow sentient and a part of this moon structure left over by the little gray guys millions of years ago. Of course, by the time anyone listens to either of them, the real scientists have already discovered the shrinking orbit and have sent a mission to investigate. That goes badly, and eventually it’s up to Houseman, Harper, and Harper’s once-astronaut partner Jo Fowler, played by Halle Berry, to save the day.

Unfortunately it all goes horribly wrong, and I don’t mean the heroic effort to save the planet; I’m talking about the plot, execution, and production of Moonfall. The first glaring problem, and there are several, is that none of this is remotely believable. Look, I’m willing to suspend my beliefs pretty far to get into a good film, but this one asks me to go too far. The laws of physics in this film are the kinds of laws you get from a Fast And Furious film, and that’s supposed to be crazy. Here it just gets too hard to swallow. The second issue is the “creature” itself. It’s the worst-looking movie monster of all time. It would make Ed Wood look like a technical genius. What happened here, Roland? The creature is a blurry mass of I don’t know what, and it tends to make all of its interactions just as blurry. This makes Blair Witch look like steady camera work. The f/x here literally hard so hard to focus on that I gave up soon after the film started. But this is Roland Emmerich, and you know those disaster scenes are going to be awesome, right? Wrong. This film puts f/x back 30 years. Often the camera pulls way back so you don’t have to deal with too much detail, and when the camera does get close, it looks truly bad. Emmerich should be embarrassed to have put his stellar reputation on the line for this crap. I’m certainly embarrassed for him.

It could all be salvaged by some good performances, but we’re to be spared even that. I’ve seen Patrick Wilson do so much better than he does here. It’s not a lack of talent, so what the heck was it? He’s phoning it all in so much that I’m not buying any of it. To make it all worse, even Halle Berry is awful in this film, and that’s not a sentence I ever thought I would be writing. She’s been one of the best actors out there for years and has left me with so many incredible characters and performances that I’m at a loss as to her horrible effort here. The film is simply not worthy of any of the names attached, and with the current situation making our filmgoing choices so much more important, I wouldn’t waste my time, health, or sanity on this one. With so many really good films getting the direct-to-stream treatment these last two years, this is one that would have been better off taking that route.

I can’t say that this is the worst film I’ve ever seen. After all, I did see Event Horizon, but this one sure comes close. Emmerich thought he could coast a little, and with a lot of hype he could bring us in on his reputation for delivering the goods. Maybe he just thought we were all so hurting to see movies that we’ll watch anything. “You underestimated us.”

Gino Sassani is a member of the Southeastern Film Critic's Association (SEFCA). He is a film and television critic based in Tampa, Florida. He's also the Senior Editor here at Upcomingdiscs. Gino started reviewing films in the early 1990's as a segment of his local television show Focus. He's an award-winning recording artist for Omega Records. Gino is currently working on his 8th album Merchants & Mercenaries. Gino took over Upcomingdiscs Dec 1, 2008. He works out of a home theater he calls The Reel World. Favorite films: The Godfather, The Godfather Part II, The Body Snatcher (Val Lewton film with Karloff and Lugosi, not the pod people film), Unforgiven, Gladiator, The Lion King, Jaws, Son Of Frankenstein, The Good, The Bad And The Ugly, and Monsters, Inc.
Jackass Forever DC’s Stargirl: The Complete Second Season (Blu-ray)