Posted in: Disc Reviews by Gino Sassani on February 8th, 2022 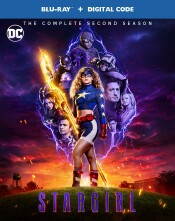 “There’s a new superhero in town.”

The original Starman was created by Gardner Fox and Jack Burnley back in 1941. Since that time there have been quite a few DC characters who have taken on the mantle of Starman. When DC executive and veteran comics writer/creator was asked to do a series on one of Starman’s sidekicks, Pat Dugan and his eventual comic Stars And S.T.R.I.P.E., he was given a directive that he could not use the iconic S.T.R.I.P.E. armor, and that just would have made the series so much weaker. Instead he counter-pitched an idea from the same era of the comics. He pitched the idea of a new Stargirl who would be somewhat based and named after his daughter Courtney, who was tragically killed in a plane crash when she was just 18 years old. He wanted to do something to represent the spirit of his daughter, and the pitch also allowed for the Pat Dugan character to appear without the famous armor. The idea was accepted, and the latest member of the DC television Arrowverse was born. Enter Courtney Whitmore, played by Brec Bassinger, in Stargirl. Warner Brothers delivers that second season in a new Blu-ray release of Stargirl: The Complete Second Season.

In the first season we were introduced to Courtney (Bassinger) and watched as she recruited a new young group Justice Society Oof America and stopped the bad guys who had made the small town of Blue Valley villain central and a rebirth of the Injustice Society of America. With her energy and message of hope, she brought these misfits together, and they kicked some you-know-what. So how does she begin her second season? It starts with her flunking out at school and being required to go to Summer School, which is the subtitle of the season. It kills plans for that family vacation they were all looking forward to, but you know there’s some bad guy stuff going on, and she’s going to be needed in Blue Valley to kick even more butt.

The old team returns. That includes Yolanda Montez (Monreal). Yolanda became the school joke when her boyfriend got her to send sexy pictures that he ended up sharing with the school. Courtney gives her the cowl and costume of Hellcat, and Yolanda instantly takes to the skills and powers. She has claws that can rip through steel. She always lands on her feet and has the moves of a feline. While reluctant to join, she eventually can’t resist. She’s become Courtney’s best friend. But after an unfortunate accident during a fight, she decides to walk away from Hellcat this season, so will she be there when the team needs her? OK, no spoiler alert needed. You know she’s got their back.

Next up is Beth Chapel (Washington). Beth is also not a popular student. She talks a lot, and fast, and can’t seem to make friends even though she’s got a heart of gold. Courtney gives her the goggles of Dr. Midnight. They are like a heads-up display in an Ironman suit. Instead of Jarvis, she has the voice of the AI Chuck that interacts with her and helps her digest the wealth of analytical data the goggles can provide. She kind of bonds with Chuck, who likes her talking and becomes her virtual friend. She’s dealing with the loss of Chuck in the goggles, and now her parents are getting divorced which is breaking her heart. Beth is the heart and soul this season. She just exudes warm and fuzzy and so much hope that she’s developed into a series standout.

Then there’s Rick Tyler (Gellman). His parents were members of the JSA and were killed by Solomon Grundy. Rick never knew any of this before Courtney and her new pals show him what really happened courtesy of Chuck. She gives him the hourglass of Hourman. When turned, it gives him one hour a day of super strength.

Of course, there’s Pat (Wilson), who has been on this emotional journey of going from sidekick who wasn’t really respected to the mentor of these kids and the new JSA. Wilson is a real asset to the series. Now the entire family knows their secret, so Mom (Smart) and dorky brother Mike (Romano) know what’s going on. Mike desperately wants to be a part of the team and almost makes it when a new hero Thunderbolt enters the series this year. He’s an entity hooked up with Johnny Thunder in the comics and appears when the words Ceiu (See You) is spoken and grants wishes, but you really have to be careful what you wish for. Now he inhabits a pen, and the words are Sokewl (So Cool), and Mike loses his chance when he wishes the Thunderbolt was in better hands. But Mike gets to ride the giant robot this season, so that’s a plus.

The big bad appears to come in the guise of a classic baddie named The Shade, played by Jonathan Cake. But his bark is worse than his bite, and he knows worse is coming in the form of a big bad named Eclipso. This guy is looking for a black diamond to increase his strength. He’s the villain who brought down the original JSA, and we learn the big secret behind that story in flashbacks. It has been a burden on Pat’s conscience, and he’s worried the same thing will happen to the new group. Eclipso gets into your mind much like Scarecrow’s fear gas or Dr. Psycho. So we see some of these characters biggest fears, and it drives the JSA apart until they rally to finally defeat the bad guy.

There are new characters this season to join. Alan Scott, the original Green Lantern, had a daughter, and now she’s drawn to the lantern at the Whitmore home. Now we have a Green Lantern and a new Johnny Thunder. We also get to see a few members of the original JSA come back to help, and Courtney gets to meet the original Starman. The Shade pitches in, as does Solomon Grundy, and even evil Cindy from the ISA wants to help defeat this big bad. It makes for one heck of a season finale.

The show has a really nice seasonal evolution. Brec Bassinger has a lot of heart and energy. She’s genuinely infectious, and like her Stargirl counterpart, you can understand why people would be attracted to her enough to follow her. She’s one of the best new characters to join the Arrowverse in a long time and one of the best matched actors/characters to play a lead in one of these shows. Her chemistry with Luke Wilson is a really big part of the heart of the show. They are great together and serve as such an emotional anchor for all of this. And I think that’s what attracts me to the show, really. It’s full of so much wonderful emotions that you just don’t see in this kind of series. The focus is really on these characters and their evolving relationships. The fights and f/x are all secondary, and that really gives a show like this the kind of legs I hope will endure.

Another strength of the show is the music selection. There’s a 50’s retro feel to much of the show with the insignia looking very much like a car model font from the 50’s. The series uses both vintage and modern songs, and they blend so perfectly with the themes and emotions of the series.

I don’t like the new idea of calling the episodes chapters, as it makes it harder to remember which episode you might have left on. The same thing is going to happen next season with the subtitle of Frenemies. There are 13 episodes.

Each episode is presented in its original broadcast aspect ratio of 2.20:1. The 1080p image is arrived at with an AVC MPEG-4 codec. There are good production values here, and you get something better than broadcast or streaming, to be sure. Black levels are fair, and the colors do pop on this show in particular.

It appears to me that the Arrowverse is running out of steam. The hope lies in new, fresh shows like this one, The Flash and the new Superman And Lois. This was a strong season of a strong show that really deserves to be on the CW instead of streaming. It’s better than Batwoman by a long shot, and this is where the hope of the franchise can be found. It officially joined the Arrowverse with Jay Garrick and John Wesley Shipp joining for cameos. This show breaks a lot of the hero rules but “Sometimes breaking the rules can be fun.”

Gino Sassani is a member of the Southeastern Film Critic's Association (SEFCA). He is a film and television critic based in Tampa, Florida. He's also the Senior Editor here at Upcomingdiscs. Gino started reviewing films in the early 1990's as a segment of his local television show Focus. He's an award-winning recording artist for Omega Records. Gino is currently working on his 8th album Merchants & Mercenaries. Gino took over Upcomingdiscs Dec 1, 2008. He works out of a home theater he calls The Reel World. Favorite films: The Godfather, The Godfather Part II, The Body Snatcher (Val Lewton film with Karloff and Lugosi, not the pod people film), Unforgiven, Gladiator, The Lion King, Jaws, Son Of Frankenstein, The Good, The Bad And The Ugly, and Monsters, Inc.
Moonfall The Capture (Blu-ray)