Posted in: No Huddle by Jeremy Butler on February 11th, 2022 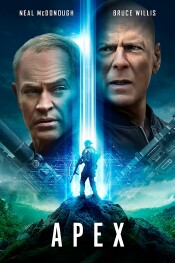 The hunted vs. the hunters. Now here is a premise that has seen its fair share of movies. Ever since Jean Claude Van Dame’s rendition in Hard Target, filmmakers have been coming up with new and sometimes cliches version of the idea of a man being hunted for sport. Personally, I’d rather just get my fix of this idea by reading Richard Connell’s The Most Dangerous Game. It’s just hard to imagine that there is any unique way left to come at this idea. Apex tries, but it falls short of the desired effect. In the case of this film, they bring in action veteran Bruce Willis to serve as the prey. Given his pedigree, you’d expect him to deliver one-liners while dispatching folks in creative manners. He delivers on the one-liners, but as far as the creative kills, he actually isn’t the person doing the most of the damage. In fact, Willis barely rates above a bystander in this film. I suppose it was ambitious to expect Willis to be duking it out like he did back in his Die Hard days; I mean, the man is in his mid-sixties now. However, if he wasn’t going to be the agent of chaos, why even bother putting him in the movie at all?

I suppose the answer to that question is obvious. When it comes to action films, Willis is quite possibly one of the world’s the biggest draws. His record speaks for itself. However, if I may be so bold, I must say that underutilization of him only serves to tarnish said record. For the amount of action, we got from him, they could have put anyone in that role without it doing any damage to the film’s quality. In fact, they have done better to use a less known talent in order to avoid the disappoint that I surely felt.

Willis isn’t the only familiar face. We also have Neal McDonough, once again typecasted in the role of the villain. Truth be told, I would have love to have seen the actors switch roles, I think that would have made for some great contrast. McDonough has a long record of playing the villain, just as Willis is usually cast in the role of the hero; I think a switch of that nature would have helped them stretch their creative muscles and infused a different dynamic. As is, McDonough’s character is given a presence that I not sure was warranted. I mean, the other characters clearly fear him, but when they describe his initial crime, it is a bit vanilla as far as murders go. I can’t believe I actually said that, but it’s true. I can understand their reservations about McDonough in the context of the previous hunts, as it is well established that he is quite skilled and in need of a challenge. But, for the most part, he pretty much just sits back and let’s others do all the heavy lifting. It’s a bit of a letdown.

The film is less about the violence and more of a psychological introspection about the type of person that choose to hunt another human. As interesting as it sounds, it’s really not what I was expecting to watch, especially from a movie with a name like Apex. The hunters are all twisted in one form or another, but not enough to maintain my interest. The film gets points for thinking out of the box, but the execution is still a bit flawed in my opinion.

Speaking of the characters, there isn’t a lot of depth to them. Even Willis’ character, our champion, we know very little about him. We hear all about the things he’s done and the fact that he should have died like a 100 times over. The film essentially builds him up as someone that trouble just seems to follow around, but his overall motivation is a mystery. He suggests that he has something to live for, but with the exception of making that claim towards the end of the movie, there is no evidence to support that fact. In fact, he’s pretty nonchalant about everything: his time in prison, his family, even the fact that people are hunting him. He basically walks through the entire film, seemingly carefree. Impervious to what happens to him. It just doesn’t match the idea of a person that has had all these near-death experiences. There needed to be more passion, a clear cut will to live. The rest of the characters are even worth mentioning.

Jeremy Butler is a film school graduate of the International Academy of Design and Technology. He is been writing for Upcomingdiscs since 2012; however, movies have played a big part of his life for much longer. Favorite genres include horror, science fiction/fantasy, and comedy. Favorite movies are V for Vendetta, Boondocks Saints, Kiss Kiss Bang Bang, and The Godfather.
The Capture (Blu-ray) Death On The Nile (2022)