Posted in: The Reel World by Jeremy Butler on February 13th, 2022 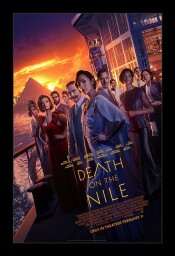 Now here is a movie that the pandemic hit hard. Originally slated for December 2019 release, this Kenneth Branagh directed and starred sequel film is finally coming to theaters after a two-year-and-some-change delay. Branagh reprises his role as director, as well as his role as one of the most famous detectives both fictionally and in the reality, Hercule Poirot. Adapted from another Agatha Christie classic novel, this follow up to the Murder on the Orient Express takes us from the railroad tracks to the Egyptian Nile River, as Poirot once again finds himself in the middle of a murder investigation, where the suspects are aplenty. Just like in the previous film, Branagh is joined by a star-studded cast that includes Gal Gadot, Armie Hammer, Leticia Wright, Annette Benning, Rose Leslie, Russell Brand, and Sophie Okonedo. While there some obvious changes to the source material, such downsizing the number of characters from the book and distributing their attributes to other members of the cast; the story loses none of the quality that made this whodunit tale a classic.

An aspect of the film that I thoroughly enjoyed was the deeper look into the past of Hercule Poirot that we received earlier on in the film. It gave the character depth that was not present in the previous film. Even in the novels, Christie is vague about Poirot’s origins. That allowed for a bit of a blank slate when it came to different interpretations of how the character become who he is. He is a character who seems to have a different walk of life with every new adaptation. For example, when John Malkovich portrayed the character for a miniseries, it was revealed that he’d previously been a priest prior to the great war. In this version, we see him during the war, but his desire to be a farmer is hinted at very earlier on. The inclusion of the character’s desire to have led a life much different from the one he leads make for a complex character and gives us a window into what drives him. He is a vain man, yes, and a bit of a narcissist, or at least in Branagh’s interpretation, but it works so well here. Despite this, he is also capable of great compassion and morality, evident during an exchange between Branagh and Wright, in which he attempts to make right a misstep on his part. His compassion is also on display when he recalls his own personal tragedy in an effort to sway a scorned woman away from her chosen path.

Speaking of a scorned woman, this seems like a perfect segue into our mystery, because one of the key elements to the story is a scorned woman. Scorned by whom? Why, that would be our victim and her former fiancé. Before I go on, I should probably issue a bit of a spoiler warning, as this review will reveal certain aspects of the plot, but only those that are also featured in the novel. If you haven’t read the novel, that is your own fault, as you’ve had 85 years to do so, and I’ve already explained that it is a classic.

Our victim is Linnet Doyle, nee Rideway, a wealthy heiress who recently married Simon Doyle, a man from more humble beginnings. The list of people with motive to kill Linnet is not a short one, as her family business along with her own callous nature has turned even friends into enemies. For example, when she meets Simon Doyle, he is engaged to her oldest friend, and yet as soon as he meets Linnet, he ends her engagement to our scorned woman, Jacqueline de Bellfort. Now that would definitely give someone a strong motive to kill, but she is not alone. In fact, she isn’t the only scorned person either, given that Linnet has an ex of her own present for the nuptials. A man she abandoned in favor of Simon. But again, the suspects are aplenty, as Linnet’s immediate circle is filled with people harboring resentment towards her.  Linnet actually says it best, “When you have money, no one is really your friend.” I’d say that rings true, as we immediately see everyone’s grievances through the eyes of our intrepid detective, who wastes no time in accusing everyone of murder.

To Branagh’s credit, he actually made light of Poirot’s propensity to accuse everyone, via a close friend of his who outwardly states that the character accuses everyone of murder. He said it in a manner, like saying that a certain individual is never on time. Poirot actually goes on to admit that this quality was a failing of his. It made for a few instances of levity in an otherwise serious circumstance. I appreciate the levity. Another good component was the case-within-a-case sequence. It showed Poirot able to think ahead and arrange circumstances to give himself the opportunity to observe others with them none the wiser as to his ulterior motives; they actually believe that his presence is their own idea.

The key component, however, is the killer reveal. This is the area where the film has to and does shine. Though the killer was not really a shock for me, mainly because I had the benefit of having read the novel, it was a shock for my wife, who had not. Most importantly, the motive for the murder has to make sense, and in this case it does. It was very believable and conveyed one of the basic reasons that people usually kill. The other piece that is equally important is the manner in which Poirot deduces who is guilty and how he proves it. As I said, the character is vain, so theatrics are a must, and it has to show his intellect. I will say that I believe we received all those necessities, especially as even the killer felt obligated to say, “Oh, how clever is Hercule Poirot.”

Jeremy Butler is a film school graduate of the International Academy of Design and Technology. He is been writing for Upcomingdiscs since 2012; however, movies have played a big part of his life for much longer. Favorite genres include horror, science fiction/fantasy, and comedy. Favorite movies are V for Vendetta, Boondocks Saints, Kiss Kiss Bang Bang, and The Godfather.
Apex (Blu-ray) Murphy’s Law Special, Special Edition (Blu-ray)