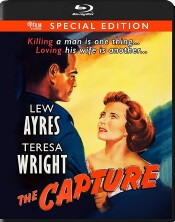 “This wasn’t a game of cops and robbers. We were playing for keeps. It boiled down to a duel between me and an unknown fellow waiting up in the rocks or struggling on ahead of me. I never had the slightest doubt that he was there and that I would find him. But I didn’t like it. It was all wrong somehow.”

John Sturges has directed some of the biggest classics of his era. He became known as a huge action director and knew how to put to together large and powerful ensemble casts. Among his classic films you’d find The Magnificent Seven  (1960) with Yule Brynner, Steve McQueen, Charles Bronson, Eli Wallach, and Robert Vaughn. There’s Ice Station Zebra (1968) with Rock Hudson, Ernest Borgnine, and Patrick McGoohan. You’ve likely seen The Great Escape (1963) with Steve McQueen once again on his famous German motorcycle. The film also stars James Garner, Charles Bronson once again, and Jurassic Park‘s Sir Richard Attenborough. What many fans don’t know is that he was also an expert in the 1950’s film noir films, and one of the greatest, if lesser known than his action films, is The Capture. The film has almost been lost to time, but thanks to a pretty solid restoration and release by The Film Detective, you know have a chance to see the more artistic and intimate side of John Sturges.

Vanner (Ayres) works as a manager for an oil company for which the payroll has been robbed for the third time in the last few weeks. A posse sets out to catch the bandits, but Vanner reasons out that they’re looking in the wrong place and sets out for where he thinks he will find the crooks. What he finds is a man seemingly on the run who refuses to put his hands up when commanded to do so. Vanner shoots and wounds the man and manages to get him back to the company where he’s lauded as a hero. But Vanner is having second thoughts after the suspect dies of the gunshot wound in custody and refuses the $2000 reward and suddenly quits his job and heads out to find another life. With little money, he trades a train ticket for a favor to deliver a letter in San Santos. That letter is the notification to Ellen (Wright), the widow of the man he just killed. He’s attracted somehow to her and takes a job as a hand on her ranch, where she eventually discovers who he is. The two form an unlikely romance, and his determination to exonerate the man he killed brings his investigation to the guilty inside man, whom he kills in a struggle. Now he’s wanted by the police and is injured so that he can’t raise his arm to surrender just as the man he shot. The entire story is told through flashbacks to a priest (Jory) he encounters while on the run.

While the film might be predictable and at times pretty hard to believe, it’s the wonderful direction and deep shadows that makes this tale so compelling. Sturges uses the locations available to him in clever ways, and the result is very much a traditional western, but in what in the 1930’s was modern times. The fact that he chose to set the story about 13 years in the past from the film’s 150 time is useful in his goal of allowing much of it to play out without modern devices like cars or trucks for the most part. It doesn’t have the grand plot of Sturges at his most popular, but it shows skills that really worked within the framework of his bigger pictures. Even amidst all of that action and drama, there were always solid characters played by solid actors, and that all started here with a nice little film noir film known as The Capture.

Lew Ayres isn’t exactly a household name, but he made a career out of playing to his type. He saw success in films like Donovan’s Brain (1953) and a series of 1950’s Dr, Kildare films opposite Lionel Barrymore, all of this years before Richard Chamberlain took over the role with Raymond Massey in the Barrymore role for television in the 1960’s. He also made quite a good living, appearing on television shows for four decades, from Playhose 90 to Columbo, Ben Casey, Route 66, Hawaii 5-O, and L.A. Law. Here he has to carry most of the film, because it’s pretty much all from his perspective, and he’s in every scene.

Duncan Rinaldo has a small role in the film, and it would be his final movie. From then on he took over both movie screens and television sets as The Cisco Kid. Victor Jory plays the priest who hears Vanner’s story. Jory was a huge stage actor for decades. He played the Indian chief in Papillon (1973) and appeared as Lamont Cranston in The Shadow (1940) as well as the field overseer in Gone With The Wind (1939. His television appearances include the classic Kolchak The Night Stalker, The Rockford Files, and Voyage To The Bottom Of The Sea, usually as an Native American character.

Teresa Wright was married to the film’s writer, Niven Busch. He often wrote parts for his wife, and during the 1940’s they were known as a power couple in Hollywood. They split shortly after The Capture, and neither really had that kind of success again. Her credits include working for The Master Of Suspense Alfred Hitchcock In Shadow Of A Doubt (1943). She also appeared in Somewhere In Time (1980 and The Steel Trap (1952) with Joseph Cotten.

Sturges used shadows quite effectively here. The opening shot is one of the best from the era as we watch a lone horseman silhouetted against the sky as he’s hunting down the film’s hero. There’s nearly no dialog during the first few minutes as we watch Vanner running from the posse injured and frightened out of his mind. There’s a haunted character to his face that we solve as he tells his story to the priest. The film remains a wonderfully atmospheric movie to this day, and never has it looked better. The restoration is solid, and the black levels allow the revealing nature of the narrative to play out, just as Sturges intended it to be. There is an audio commentary by C. Courtney Joyner which gives a few film historic tidbits. You get a five-minute bio on Teresa Wright and a bit longer for John Sturges. Miss this one and you’ll be asking yourself, “Am I really going out of my mind?”

Gino Sassani is a member of the Southeastern Film Critic's Association (SEFCA). He is a film and television critic based in Tampa, Florida. He's also the Senior Editor here at Upcomingdiscs. Gino started reviewing films in the early 1990's as a segment of his local television show Focus. He's an award-winning recording artist for Omega Records. Gino is currently working on his 8th album Merchants & Mercenaries. Gino took over Upcomingdiscs Dec 1, 2008. He works out of a home theater he calls The Reel World. Favorite films: The Godfather, The Godfather Part II, The Body Snatcher (Val Lewton film with Karloff and Lugosi, not the pod people film), Unforgiven, Gladiator, The Lion King, Jaws, Son Of Frankenstein, The Good, The Bad And The Ugly, and Monsters, Inc.
DC’s Stargirl: The Complete Second Season (Blu-ray) Apex (Blu-ray)