Posted in: Disc Reviews by Brent Lorentson on February 16th, 2022 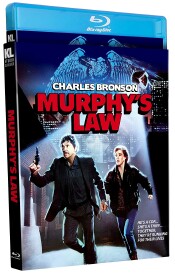 Kino Lorber has plundered the vaults of MGM and released one of the better known Charles Bronson films, Murphy’s Law. To me this is one of the Cannon classics where it was simply a fun tough guy film filled with everything that would make today’s woke audiences cringe. There is no way a film like this would get made now, and it’s a shame, because, well, this is pure escapism and is a good time from start to finish. I’m not saying that this film is perfect, but it captures the energy of what made Cannon films fun during the 80’s and early 90’s. Charles Bronson is playing Jack Murphy, a detective who has hit hard times with his wife wanting a divorce, though he’s not ready to give up on that relationship. Things are about to get much worse when Jack is framed for the murder of his ex-wife and her new boyfriend who runs an exotic dance club.Murphy gets locked up, and in the holding cell, as luck would have it, he’s locked up with Arabella McGee (Kathleen Wilhoite) who in the opening scene of the film we see stealing Jack’s car. Jack has to escape as a means to clearing his name, though he’s cuffed to Arabella, which of course makes things all the more difficult. This is definitely an odd-couple mash-up that we see a lot of during the 80’s where these characters are forced to be partners and bicker a majority of the film but in the end become partners. There isn’t even a mystery to who the killer is as we watch the psycho woman played by Carries Snodgress execute people without mercy. The only real mystery going on with her is why she is on her murderous rampage.

Part of what elevates this film from the others with the similar plot is the direction of       J.  Lee Thompson.  While he isn’t exactly a household name, he’s got quite a few classics on his resume: The Guns of Navarone, Cape Fear (1962),  Battle For the Planet of the Apes  and another Charles Bronson classic 10 To Midnight.  Pretty much he’s one of the go-to directors for tough guy films, and he simply knows how to make a good popcorn flick.  While watching this film and looking at Bronson’s resume, there are a lot of similarities to Liam Neeson’s career in the past decade, and I wonder how much better some of his films could have been if they were put in the hands of J. Lee Thompson.

While I’m not about to get into spoilers, the film’s climax is easily one of the best moments of the film. Everything from how it is shot to simply it being a cool showdown period between Jack and everyone who seems to want to kill him. Sure, we’ve seen female villains, but Carrie Snodgress is easily one of the more dangerous villains we’ve seen in this era, especially because she doesn’t use sex as an advantage. It’s simple menace, and, well, that’s a little more frightening. The other takeaway from the film is how this was the first breakout performance by Kathleen Wilhoite. She may not be a name you recognize, but she had an impressive body of work. But the biggest surprise for me with this film is a scene early on with Lawrence Tierney (Reservoir Dogs and The Prowler).  He only has the one scene, but it does make an impact.

At the end of the day, sure, the movie has some issues, mostly about how this is a film that is a product of its time. For me, I don’t have a problem with it, but I can see younger audiences clutching their pearls with some of the film’s dialog and content. This was a time when the heroes were flawed, but the villains were simple bad guys, and for the most part you knew how these films would play out.

Murphy’s Law is presented in the aspect ratio 1.85:1. The 1080p image is arrived at with an AVC MPEG-4 codec at an average of 39 mbps. This is a good-looking print, considering it’s from the 80’s. I’d imagine at some time this has been remastered, because the color and overall quality looks about as good as it must have when it was released on the big screen. There is some issue with the separation of blacks, but it isn’t something that takes away from the experience. Skin tones look great, and the detail is well captured.

The 2.0 Master Audio track is serviceable for this kind of film and helps with the throwback nostalgia of the Cannon years. The dialog is clean, and everything is mixed well; sure, it doesn’t have the bells and whistles of 5.0 surround, but it gets the job done.

Audio Commentary: With actress Kathleen Wilhoite and film historian Nick Redman.  This is a fun commentary, mostly because of how different these two personalities are together. There is a lot of information on the film and it is definitely entertaining throughout.

Lyon’s Law: The Cannon Years: (19:26) This is an interview with Robert F. Lyons, who plays Murphy’s partner in the film and has worked in several Charles Bronson and Cannon movies over the years. He gives perspective on how he got some of his parts and his experience in the industry.

Trailers: There are several Charles Bronson trailers on the disc along with two radio spots advertising Murphy’s Law.

This came out a few years after 48 Hours, and sure, this film seems to want to ride that wave of reluctant partners solving a crime. Is it as good? No, but it is still a fun ride. This isn’t one of Bronson’s best performances, but it is definitely one of his better films from the later portion of his career. If you are looking for some 80’s nostalgia or have an interest in Cannon films, Murphy’s Law is worth checking out.

Brent Lorentson is a horror writer and film critic based out of Tampa, Florida. With a BA in Digital Film, he co-wrote and co-directed Scavenger Hunt. His short stories have appeared in various horror anthologies. In 2019 his short script Fertile Blood will be a part of the anthology horror film Slumber Party. He is currently working on his first novel A Dark and Secret Place set to be released in late 2019. Favorite Films: Taxi Driver, Fight Club, I Saw the Devil, The Wild Bunch, Dawn of the Dead, A Clockwork Orange, Pulp Fiction, Heathers, The Monster Squad, and High Fidelity.
Death On The Nile (2022) Heels – Season 1