Posted in: No Huddle by Jeremy Butler on February 17th, 2022 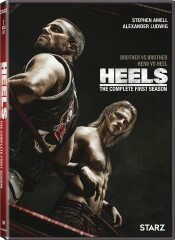 Wondering what happen to Stephen Amell and Alexander Ludwig after wrapping up their separately widely popular television series? I mean, what is there to do after playing a superhero and a king? Apparently, the answer is to star in a series about a local independent wrestling league, as the two bring us Heels. Amell and Ludwig play brothers, Jack and Ace Spade, sons of a local legendary wrestler (played by David James Elliot), carrying on their family business, the Duffy Wrestling League (DWL), of playing out scripted wrestling matches in a small town in Georgia. Amell plays the heel, or villain, while Ludwig acts as the face, or hero of the promotion. Despite their bond, the brothers find themselves at odds over the direction of the wrestling promotion, as they vie for national attention. Outside their ring, their lives are just as messy, as their personal relationships also face scrutiny by their very public personas. Rounding out the cast are Alison Luff as Jack’s wife, Staci, Mary McCormack as Willie Day, Jack’s business partner, Allen Maldonado as Rooster, a star performer for the DWL, and Chris Bauer, a former member of the DWL who went on to find national success.

This was a series that I was very excited to see, and it did not disappoint. Dare I say, this is the most realistic representation of what it must be like for an independent wrestling league. An aspect that I enjoyed was the portrayal of the difficulty of taking on all the tasks of trying to promote the business. In every episode, we watch Jack struggle to make his family legacy a success, usually neglecting other parts, particularly people, in his life as he does whatever it tasks to make a good show. This neglect is a key caveat to the story, and it is during these periods that we see the presence that Luff has, as her character challenges her husband. Prior to this series, I knew nothing of the actress, but she is clearly not a newcomer to the profession. With relative ease, she contends with Amell, often acting as the voice of reason for a stubborn Jack. That is not to say that she isn’t afraid to call him on his crap, which she does often. Most notably in the season finale (Double Turn), when she confronts her husband over her concerns that he beginning to become too much like the person that he pretends to be.

Another great aspect was the mirror of the brothers. Initially, Jack takes on the role as the villain for their audience; however, outside the ring, he is the dedicated husband and father, as well as dutiful yet personable boss to his fellow wrestlers. This is sufficiently demonstrated in Episode 3 (Cheap Heat), when a frustrated wrestler on the promotion suggest that he doesn’t even know his name. Amell perfectly retorts this suggestion with a monologue that proves that he clearly is invested in every person in his employ. Then there is Ludwig as Ace; despite, being cast in the role of the hero and being adored by the fans, outside the ring he is quite selfish and entitled. This is shown throughout the first few episodes, including a scene in the pilot where he belittles a cashier after she catches him stealing. Fortunately, the character does go through a growth period, where after an incident in the ring in which his popularity is damaged, he endeavors to be a better person. In regards to character development, I’d say Ace Spade has the most, as he has the most to overcome this season.

However, the character who has the farthest to fall is Wild Bill Hancock, played by Chris Bauer. When the season starts out, Wild Bill is living high, figuratively and literally. He comes back into town after having left the promotion in favor of bigger and better opportunities. There is a tension between the character and Amell’s as their first interaction makes it clear that Wild Bill did very little to help the promotion that gave him his start. In fact, he is quite smug and dismissive of the DWL. Well, you don’t have to be a fortune teller to see what would happen to old Wild Bill. Given the character’s personality, it is impossible to muster any sympathy for him, but I will say that I admire his resourcefulness, as he very cunningly worms his way back into the DWL despite everyone being opposed to the idea.

Of course Will Bill isn’t the only thing Jack has to worried about, as another promotion, one with deeper pockets, is hell-bent on running the DWL out of business. This is what upped the ante for me. I enjoyed watching these rival promotions clash, doing anything from poaching talent to publicly slandering one another to undermine each other. It reminded me of the real life rivalry between the World Wrestling Entertainment (then, the World Wrestling Federation) and World Championship Wrestling, from years ago. Those promotions did a lot of the same things to one another, and seeing something similar depicted in Heels gave the show an air of authenticity.

In the case of this series, it’s hard to say which episodes were my favorites, because despite ther being only being eight episodes, every episodes had several elements that I enjoyed. I supposed if pressed, I’d have to say episode one (Kayfabe) because it sets up the series, as well as the character dynamics, as well as the season finale (Double Turn) because it really shook things up. I mean, really shook things up. Like to the extent that I’m anxiously awaiting Season 2, which has been confirmed, but no details on a release date as of yet.

Jeremy Butler is a film school graduate of the International Academy of Design and Technology. He is been writing for Upcomingdiscs since 2012; however, movies have played a big part of his life for much longer. Favorite genres include horror, science fiction/fantasy, and comedy. Favorite movies are V for Vendetta, Boondocks Saints, Kiss Kiss Bang Bang, and The Godfather.
Murphy’s Law Special, Special Edition (Blu-ray) Uncharted