Posted in: The Reel World by Brent Lorentson on February 18th, 2022 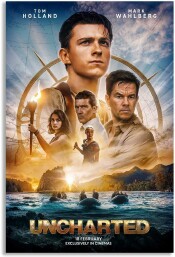 The Naughty Dog series Uncharted has been a bit of an obsession in my home since I played the first game. I always viewed the series as the Indiana Jones video game fans always wanted but just never got. There’s a reason for the game’s popularity. Each game comes with a great story, fun action game play, and memorable set pieces. It’s no surprise that it would eventually become a blockbuster movie, but what has surprised me is how long it has taken to bring the character of Nathan Drake to the big screen. Sure, you can argue we’ve gotten a new Tomb Raider film, and some could argue Uncharted is simply an Indiana Jones knockoff. But then I’d have to ask those people, have they actually played the game? Even with another Indiana Jones film in post production, and as much as I love that franchise, that fourth film simply left a bad taste in my mouth, and I’m slightly concerned about what could happen with a fifth film not helmed by Spielberg.  It’s these thoughts that have me  gotten me so excited about the prospect of an Uncharted film, a passing of the torch for a new adventure franchise that’s filled with treasure hunting, exotic locations, and plenty of action. After a decade of development, does the film live up to my expectations, or does it disappoint like so many other video game adaptations that have been released over the years?

Tom Holland steps into the role of Nathan Drake. When we meet this character he’s nothing more than a clever pickpocket, and though he’s a fan of history and legends of treasure, he hasn’t yet become the treasure hunter we know and love. Nathan is approached by Victor “Sully” Sullivan (Mark Wahlberg), a professional thief/treasure hunter who wants to recruit Nathan for a job, and it’s Sully’s connection to Drake’s long-lost brother that convinces Nathan to go ahead and help with the job that involves stealing a rare cross from an auction house. Also after the cross is Santiago Moncada (Antonio Banderas). The cross happens to be a key that leads to a fortune that is valued at $5 billion dollars. The cross is only the start of this globetrotting adventure that is filled with double-crosses and clues to solve the mystery of this lost treasure.

The film does have a rough start (not counting the film’s opening action sequence).  Honestly, I wish they kept the way Nathan and Sully met closer to the game, because in the game it was more organic, but in the film it just is kind of generic and sort of boring.  Thankfully, what does work is the chemistry between Holland and Wahlberg. The chemistry of the two is what makes the film work as well as it does. I was skeptical. I felt Holland was too young and just wasn’t sure how Wahlberg would do as Sully, especially when at one point he was going to be cast as Drake. I’m happy to say these guys are great in these roles. I feel Holland’s time as the wisecracking web-shooter groomed him nicely to play Drake as well as help him with the physical demands of the character.

Banderas seems to be having fun taking on the role of the villain, though it’s unfortunate that his role is overshadowed by his assistant, Braddock (Tati Gabrielle), who is given way more screen time than is deserved. If there is a big flaw with the film, it is with how they handle the villains. While Santiago at least has a purpose in going after the treasure which he feels is his, he doesn’t really do much more than give orders. We don’t get to see him as an active member of the hunt, and Braddock doesn’t offer up much other than muscle. She’s supposed to be so clever, but we never see it. To sort of save the day in the conflict department, we have Chloe Frazer (Sophia Ali), who is an experienced thief and friend of Sully’s who has her own agenda in retrieving the treasure. I love Chloe from the games, and honestly her being a ringer who’s working for and against Drake and Sully is what keeps the energy fun.

As for the action and adventure aspect, there are plenty of great action set pieces to keep filmgoers entertained. The film captures many of the elements from the game like the fight sequences and the parkour chases, but there is plenty more fun to be had. The trailers show us one of the more entertaining sequences with Nathan taking on some bad guys while hanging out of a cargo plane. This is the kind of over-the-top moment I want out of these films. Of course it is CGI, but it’s the kind of eye candy that just left me with a stupid grin on my face, and then there is the final showdown that is so full of spectacle it is worth the price of admission alone and needs to be seen on the biggest screen.

Now for the fans of the game, one thing that is missing here are some of the great shootouts that the game offers up. It takes a while till see we see Nathan strap on the gun holsters, but damn, it is a fun moment. There are a lot of moments and Easter eggs for fans of the game, everything from spotting the Naughty Dog logo to even an amusing sequence where Nolan North makes an appearance. As a fan of the game, I walked out of the theater pretty happy with what I saw, but it’s the two stingers during the credits that really have me excited. I won’t spoil anything, but it definitely looks like they are ready to do some sequels, and what they tease is pretty awesome.

I wasn’t sure if director Ruben Fleischer was the right choice for this. Honestly, I would have expected the studio to lobby for Gore Verbinski, but Fleischer really pulled off something special here. I’m surprised this wasn’t released during the summer, because this is everything you’d want with a big popcorn movie event, but perhaps the studio wanted to keep riding the Tom Holland wave of success following Spider-Man: No Way Home. This is a movie that deserves to be seen on the big screen, and it’s safe to say that Holland is definitely a bona fide superstar at this point, and I’m curious to see what’s next from him.

Brent Lorentson is a horror writer and film critic based out of Tampa, Florida. With a BA in Digital Film, he co-wrote and co-directed Scavenger Hunt. His short stories have appeared in various horror anthologies. In 2019 his short script Fertile Blood will be a part of the anthology horror film Slumber Party. He is currently working on his first novel A Dark and Secret Place set to be released in late 2019. Favorite Films: Taxi Driver, Fight Club, I Saw the Devil, The Wild Bunch, Dawn of the Dead, A Clockwork Orange, Pulp Fiction, Heathers, The Monster Squad, and High Fidelity.
Heels – Season 1 Remo Williams: The Adventure Begins (Blu-ray)