Posted in: The Reel World by Gino Sassani on March 3rd, 2022 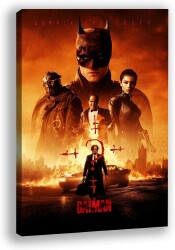 You have certain expectations when you go to a superhero/comic book movie. Sure, it changes a little depending on the character that you’re going to see. But there are certain things that all of these films tend to have in common. There’s an expectation of frantic action and some mind-bending special f/x. You’re looking for colorful villains who tend to act over-the-top and always provide that gentle wink back at the audience. When these expectations aren’t met, audiences tend to be disappointed, and big budget films can end up costing the studios huge in the end. Even as we appear to be reaching the last days of the limited pandemic crowds, that risk gets multiplied. It also doesn’t help if audiences are still riding the high off the first big global billion-dollar film in almost three years. That’s the kind of headwinds The Batman is facing when audiences line up to see the return of one of the oldest and most famous heroes in comic history. What if I were to tell you that you won’t get a lot of any of those things, but you’re going to love it anyway? That’s exactly what I am telling you about Warner Brothers’ newest Batman film, simply titled The Batman.

It all started pretty much when the whole Snyder-led Justice League era was coming to an end, at least for a while. Ben Affleck was going to continue his run as Batman in a standalone film that he was once going to write/direct and star in. Well …  Affleck’s life took a little turn for the worse, and the more time that went by, the less likely that movie was ever going to see a local multiplex. Warner Brothers didn’t give up. They turned to Matt Reeves, who did such a great job on Fox’s Planet Of The Apes franchise. Before we knew it things were looking brighter for The Dark Knight. Robert Pattinson was tapped to take on the dual lead of Bruce Wayne/Batman, and my expectations got a little deflated. But a huge, strong cast started to get caught up in this thing, and it grew to monstrous proportions. Rumors started to circulate that the first cut of the film ran almost four hours. By the time of the final cut, it was still running just under three hours. And that’s where it finally stands. The question remains. Will that three hours feel more like four hours, or will it sprint by so fast we won’t see the end coming? I’m happy to report, it’s the latter.

The first thing you have to understand is that you need to adjust those expectations. Don’t think of this as a superhero film or a comic film. Think of this more like a serial killer thriller like Seven or Silence Of The Lambs. That’s not as much of a stretch as you might think. Remember that in his early days back in the late 1930’s until the 50’s, Batman was better known as The World’s Greatest Detective. He actually rarely faced big bads like The Joker or The Penguin. He faced mobsters and normal killers. Consider this film a return to those oft-forgotten roots of the character and you will be in for a fine treat.

The film is loosely based on the Year Two comic run. Batman (Pattinson) is still kind of finding his way and keeping a journal of his exploits and thoughts. The Gotham City Police are split on what they think of the vigilante. Most don’t trust him. James Gordon (Wright) isn’t commissioner yet. He’s a lieutenant and pretty much Batman’s inside man on the force. He believes in this mysterious stranger and has worked out a signal to summon Batman when he’s needed. It’s a crude version of the famous Bat Signal. And Gordon needs Batman’s help now, with the brutal murder of Gotham’s mayor, who was in the middle of a tough campaign for re-election. The killer leaves behind an envelope addressed to Batman and calls himself The Riddler (Dano). It appears that this killer has a list of people with connections that are yet to be discovered. He intends to kill them in gruesome fashions and taunts Batman to stop him. Things get complicated when it appears Bruce Wayne is one of the targets because of the deeds of his father Thomas (Roberts) and Martha Arkham Wayne (Stocker). Bruce is learning there is so much he doesn’t know about his parents, and only butler Alfred (Serkis) appears to know those truths. It appears that his parents might have been mixed up in a corrupted mob led by local Don of Gotham, Carmine Falcone (Turturro). The more he investigates, the deeper the mystery goes. He must battle his own demons and stop The Riddler. The result is a much more nuanced Batman than we’ve ever seen and a deep collection of characters that feel more like throwbacks from an old George Raft gangster film or a modern film noir assortment of seedy characters who live and operate deep in the shadows of Gotham City.

Those characters include The Penguin, played by an unrecognizable Colin Farrell. Like the character of the old comics, he’s the owner of a seedy nightclub called The Iceberg Lounge. Batman also encounters cat burglar Selina Kyle, played by Zoe Kravitz, who is planning on taking Falcone down for personal reasons. Another throwback from those 40’s comics has Batman and Kyle in a somewhat complicated relationship. The two share much better chemistry than I expected, and there are some real nice film noir moments between these two characters. You never hear the name Catwoman, but the origins are certainly easy to see. John Turturro is equally lost in the guise of Falcone and truly brings to life one of the better characters from the old comics. I love that when Bruce goes to see Falcone for the first time, he’s listening to I Have But One Heart, the song Johnny Fontaine sings at the wedding in The Godfather. The most amazing thing about this cast of characters is with a running time just shy of three hours, almost everyone but Kyle is underused. Andy Serkis gets very little screen time, and you will absolutely be wanting more of Dano’s Penguin.

Action is not the central theme of the film. That doesn’t mean there aren’t some memorable moments. There is a rather sweet car chase involving the Batmobile, mostly a muscle/stock car hybrid. It ends in a rather cool stunt, but these moments are really not what this film is about. The film is about atmosphere and the shadows where Batman has thrived for nearly a century. The Riddler isn’t the over-the-top, frantic guy we’re used to seeing. He’s Hannibal Lecter, and there isn’t anything amusing about this character at all. Forget the green suits and the prancing about with a cane. This Riddler is a trap-door spider waiting to pounce. This is like no Batman film you’ve ever seen, and it will be interesting to see how it fits into the DCU going forward. There’s a surprise ending that I certainly won’t spoil for you. Let’s just say, “Things just got complicated.”

Gino Sassani is a member of the Southeastern Film Critic's Association (SEFCA). He is a film and television critic based in Tampa, Florida. He's also the Senior Editor here at Upcomingdiscs. Gino started reviewing films in the early 1990's as a segment of his local television show Focus. He's an award-winning recording artist for Omega Records. Gino is currently working on his 8th album Merchants & Mercenaries. Gino took over Upcomingdiscs Dec 1, 2008. He works out of a home theater he calls The Reel World. Favorite films: The Godfather, The Godfather Part II, The Body Snatcher (Val Lewton film with Karloff and Lugosi, not the pod people film), Unforgiven, Gladiator, The Lion King, Jaws, Son Of Frankenstein, The Good, The Bad And The Ugly, and Monsters, Inc.
The Antichrist aka The Tempter (Blu-ray) Invasion of the Body Snatchers (1978) (Blu-ray)