Posted in: Disc Reviews by Brent Lorentson on March 4th, 2022 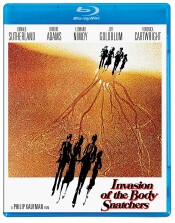 If I’m being honest, it’s been decades since I saw the 1956 Invasion of the Body Snatchers, and I’m not even sure I saw the whole thing, but I do remember the ending. It’s not that I feel it’s a bad film; I just have had no need to revisit it because I enjoy the 1978 version so much. The startling ending of this film is quite infamous. For those who haven’t seen it, I won’t spoil it for you, but it is a moment that has stuck with me since I first watched back in the old VHS days. Since the 1956 film has been out, there have been several takes on the material, and numerous bad knock-offs as well, but for me, the 1978 film with Donald Sutherland and Jeff Goldblum will always be the true classic in my eyes. Getting this title to review, it’s been ages since I’ve seen the film, so I was excited about revising this classic. I wasn’t sure it would hold up, but what surprised me most was simply how relevant the film remains with its themes of not conforming to the populace to even the paranoia about becoming a pod person in current terms infected with COVID.

The film opens up in space, spores traveling a great distance till finally falling to Earth and eventually spawning into small flowers and thus spreading from there. One of the highlights off the film’s opening few minutes is the cameo appearance of Robert Duvall as a priest who may be one of the first infected by the spores. The film then introduces us to Elizabeth (Brooke Adams). When she finds a strange plant she’s having trouble identifying, we as the audience knows that she shouldn’t be sniffing the flower and can already accept that she is doomed. To deflect our attention, Elizabeth starts to grow suspicious of her boyfriend Geoffrey (Art Hindle) when he starts acting strangely and she sees him meeting with other strangers from around the neighborhood.

What is clever about this film is how it shifts who the main character is. We start by thinking it will be Elizabeth, but instead it is actually Matthew (Donald Sutherland) whom she works with at the Department of Health. He hears her concerns about her boyfriend acting strange, but he of course thinks she’s being paranoid. Even when he starts noticing strange things happening to the people around the city, it takes a while till he’s convinced something is really going on.

This is somewhat an ensemble cast with Jeff Goldblum, Victoria Cartwright, and Leonard Nimoy filling out the rest of the major cast. Nimoy was coming off his success as a certain famous Vulcan, and the role is a bit of a departure for him, as he plays a cold psychologist who believes everyone is paranoid about what is going on. While I think it is a bit of a stretch to call his character the villain, he’s definitely difficult to like and one we’re instantly suspicious of when it comes to his motivations. Then there is Jeff Goldblum, who makes a great breakout performance here as one of the film’s heroes.  Goldblum has many scene-stealing moments here, though the best may be when he comes face to face with his double or replacement at a mud bath facility that is run by his wife Nancy (Cartwright).

It’s the films somewhat grounded and realistic approach that makes the film work. This isn’t a big and flashy attack by aliens like in War of the Worlds or Independence Day, but more a silent and covert takeover. When we do get to see the pods birthing these alien versions of characters, it’s a shocking and disturbing experience and is more impressive because the effects are all practical. Then factor in how all the characters know what’ll happen to them if they fall asleep — well it’s enough to want to brew a cup of the strongest coffee you can find.

The way Philip Kaufman decided to approach this film is what makes this film great.  Filming it as though it were more a mystery thriller than an action special makes the film more intimate and more terrifying. The film noir style of not showing us everything gives us reason to fear what we can’t see, and the darkness is something to be afraid of. The time spent with Matthew and Elizabeth and their attempts to escape the city are done with the kind of tension that you’d expect from another genre. The fact that he doesn’t give us all the answers to who is still human and who has been “snatched” makes every moment tense and has us knowing at any minute something bad can happen to our heroes. Down to the final minutes of the film, even knowing how it was all going to end, it still makes an impact after all this time.

To modern audiences I think many would complain that it is a bit of a slow burn, but that is why I love the film. This is a film that doesn’t hand out all the answers and doesn’t go for spectacle at all, but instead a heavy dread. The practical effects are amazing, and the performances from the cast are great. There is a reason why this film is a classic. This film is also a reason why I may not go around smelling unknown flowers. This is sci-fi horror at its finest and manages to be timeless over 40 years after its release.

Invasion Of The Body Snatchers is presented in the aspect ratio 1.85:1. The 1080p image is arrived at with an AVC MPEG-4 codec at an average of 36 mbps. This is a unique looking sci-fi film, because it was shot as if it were film noir. This is a dark movie, and at times you can’t see much of what is going on; then there are times where we get to see shadow play at work to help tell the story. It’s almost like a B&W film at times, and I wonder how good this film would look in B&W. The remaster of this film is incredible. It looks as good as it must have when it first debuted in 1978. The image is sharp, and the colors are vibrant, but what is most remarkable is how deep the blacks are and the beautiful shadow play across the walls of buildings and the interiors. The textures come through nicely with the costumes, but it’s the detail in the pods and in the duplication process that stood out the most.

The 5.1 DTS-HD Master Audio track is a little underwhelming, but there are a few moments where it feels utilized properly, like when the characters are in the tunnel while escaping to reach the airport. The dialog is sharp and clean throughout. The sound design is what is impressive when it comes to the pods and the birthing sequences. Mixed with the unique score by Denny Zeitlin, it definitely creates an unsettling experience.

Audio Commentary: With Author and Film Historian Steve Haberman. This track is basically a bunch of facts given to you about the original film and the 1978 version. It doesn’t feel organic at all, but more like he’s simply reading facts out of a book.

Star-Crossed in the Invasion: Interview with Actress Brooke Adams: (9:07) The actress discusses her time on the film and how she got the part.

Re-Creating the Invasion: Interview with Screenwriter W.D. Richter: (15:45) The interview has the writer discussing the new approach to the film and changing the location to San Francisco and writing while shooting the film.

Scoring the Invasion: Interview with Composer Denny Zeitlan: (15:35) The composer discusses the unique approach he took to scoring the film.

Leading the Invasion: Interview with Actor Art Hindle: (25:04) This is a lengthy interview about his time working on the film, and he has some fun stories about his interactions with other actors from the film.

Writing the Pod: Interview with Jack Finney expert Jack Seabrooke: (11:16) Here we get a brief history of the writer who wrote the original story, “The Body Snatchers”.

Re-Visitors From Outer Space, Or I How I Learned to Stop Worrying and Love the Pod: (16:15) This is a collection of older interviews with the cast and crew about the making of the film.

Practical Magic: The Special Effects of the Pod: (4:39) A short behind-the-scenes look discussing how they created the spores at the start of the film.

The Man Behind the Scream: The Sound Effects Pod: (12:48) A discussion about how the sound effects team came up with the unique sounds used to bring the pods to life.

The Invasion Will Be Televised: The Cinematography Pod: (5:24) A ddiscussion about the look and style of the film.

Forget all the remakes; this is the version to check out. This is a fun sci-fi classic that delivers in many ways.  I know some are hesitant to try watching older films, but this is one that holds up and is better than most films of the genre that are released these days.  As for those who have seen it, this version is most likely the best you‘ll come across with hours of bonus features to keep you entertained for some time.

Brent Lorentson is a horror writer and film critic based out of Tampa, Florida. With a BA in Digital Film, he co-wrote and co-directed Scavenger Hunt. His short stories have appeared in various horror anthologies. In 2019 his short script Fertile Blood will be a part of the anthology horror film Slumber Party. He is currently working on his first novel A Dark and Secret Place set to be released in late 2019. Favorite Films: Taxi Driver, Fight Club, I Saw the Devil, The Wild Bunch, Dawn of the Dead, A Clockwork Orange, Pulp Fiction, Heathers, The Monster Squad, and High Fidelity.
The Batman (2022) Supergirl: The Sixth & Final Season (Blu-ray)