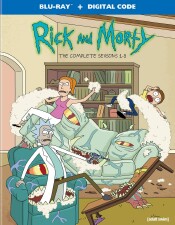 In 2013 when Rick and Morty first appeared on the Adult Swim block on the Cartoon Network, I don’t think anyone was ready for just how much of a pop-culture impact the show would have. Five seasons and 52 episodes later, the animated series about Rick, a half-drunk scientist, his grandson Morty, and their over-the-top adventures have continued to entertain us. Now you can get all five seasons in one excellent little package. If that doesn’t make you go, “Wubba Lubba Dub Dub!” I don’t know what will. Over the years, I’ve been lucky enough to review the show; you can go search the site and find out my thoughts on the seasons, but here I’m going to give a quick overview of the show and why if you haven’t checked the show out before, going ahead and buying this set is one of the best things you can do for yourself. The show, for those who may be unfamiliar, is a fun concoction between Back to the Future and more than a sprinkle of Futurama. If that sounds like a fun ride, well, then this may be the animated series for you.

For a while now, it has been accepted that cartoons are no longer for kids, and it can be argued that most of the popular animated shows now are more geared towards adults than kids these days. I’ve grown up with The Simpsons, and I’ve enjoyed the run that Family Guy has had, but really these have been the only animated shows I’d consider myself loyal to. Upon seeing some ads promoting Rick and Morty and hearing my friends talk about the show, I couldn’t help but think perhaps this could possibly be a new animated series I could get excited about.

At first glance, Rick and Morty seems like the perfected animated blend of Family Guy and The Simpsons, and for the other-worldly locations, even Futurama. The comparisons are hard to look past; after all, the family dynamic is just about the same, and the shows are filled with pop-culture references throughout, so what makes Rick and Morty stand out from the other shows?

The title characters, both voiced by their creator Justin Roiland, Rick (an elderly, alcoholic inventor) and Morty (well, let’s just say he’s dim-witted), are an unlikely duo who find themselves getting into trouble and adventures together, usually at the fault of an experiment gone wrong. These adventures take them into multiple realities and distant planets (or not-planets in the case of them traveling to Pluto). The dynamic between the grandson and grandfather is intentionally odd and uncomfortable at times but does allow for plenty of humor to arise.

While I enjoyed the first season of Rick and Morty, I wasn’t all that sure about the show’s staying power with Adult Swim. I’d talk about the show with some friends, but for the most part this seems to be a show that finds its fan base more in their late teens.

It’s fair to say it’s been more than a few years since I was a teenager, so perhaps it shouldn’t be much of a surprise I was hesitant with this season (feel free to check out my review of Season 1). On the other hand, maybe I’m just more in touch with my inner teen, or Rick and Morty has stepped out and into the realm of a broader audience, because Season 2 kept me laughing throughout.

I was a little disappointed with Season 4, and I was a little hesitant in delving into Season 5, but I decided that I’d give this season a shot, and if it failed to impress, I’d just pass the next season on to another writer. Well, I’m glad I gave it a try, because Season 5 was about as good as the show has ever been, and there are a few episodes that definitely are not only re-watchable, but ones I can see myself returning to again and again for the quick laughs and the fun story. What is also a little surprising is this season seems to have a little more emotion, and by the end of the season, I was surprised by how much the show evolved with the characters and gave us some growth with their relationships.

Basically, it became more than just a cartoon to entertain stoners, and I mean that in the best way.

One could argue that the show hit its peak with season three with the “Pickle Rick” episode, but Season 5 for me was definitely a fun ride. I was considering making a top ten list, but I wouldn’t want to spoil the fun for those who haven’t seen the show yet, and honestly, looking back, I feel my thoughts on some episodes have changed with time. Nevertheless, it’s a show with a high re-watchability value and is one that you’ll find yourself quoting at some point or another. While I don’t think it’s at the status of The Simpsons, South Park, or Family Guy, if it continues to pump out episodes with the quality that it has, there is a good chance it will be a show that ranks above all the animated competitors.

Brent Lorentson is a horror writer and film critic based out of Tampa, Florida. With a BA in Digital Film, he co-wrote and co-directed Scavenger Hunt. His short stories have appeared in various horror anthologies. In 2019 his short script Fertile Blood will be a part of the anthology horror film Slumber Party. He is currently working on his first novel A Dark and Secret Place set to be released in late 2019. Favorite Films: Taxi Driver, Fight Club, I Saw the Devil, The Wild Bunch, Dawn of the Dead, A Clockwork Orange, Pulp Fiction, Heathers, The Monster Squad, and High Fidelity.
Where There’s Life / Monsieur Beaucaire Dexter: New Blood (Blu-ray)