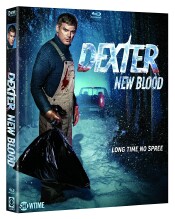 It’s been almost 10 years since everyone’s favorite serial killer disappeared into a hurricane and left the airwaves with a somewhat unsatisfying series finale. It wasn’t quite as bad as David Chase’s ill-conceived hard cut that ended The Sopranos, but unlike David Chase, Team Dexter gets a second chance to get the ending right. With the death of actor James Gandolfini, Chase won’t ever get the opportunity to give Tony Soprano a better exit. But Dexter gets the sendoff he should have had back in 2013 with the limited revival series Dexter: New Blood. The 10-episode run returns Michael C. Hall to the role of Dexter Morgan. You don’t want to break into these episodes without taking time to watch the original series. That’s going to set you back about 96 hours, but the investment is necessary if you’re going to truly appreciate this return. You can check out our reviews of those previous seasons by banging it right here: Dexter Reviews. I’ll wait….

You’re back. Great. Now the first thing that makes Dexter work is its star, Michael C. Hall. You might remember Hall from his days on Six Feet Under, where he played the conflicted and very gay funeral director. His deadpan style and somewhat offbeat timing make him a perfect fit for these rather quirky characters. If you thought he was good as David Fisher, you’re simply going to love him as Dexter. It amazes me how different he looks and sounds. It was at first very difficult for me to actually identify him, he gets so completely immersed in character. You’ll find yourself rooting that Dexter doesn’t get caught, if for no other reason than you don’t want the show to end. But the truth is it did end. Dexter got away, and we caught a glimpse of him working as a lumberjack somewhere in Washington state. We don’t know how that all went, but we know he’s been spending the last few years in the upper-New York small town of Iron Lake. There he has taken on the name of Jim Linsey. He works at, of all places, a gun shop in a town that has a high percentage of hunters. He’s become an intimate part of the town, knowing everyone from the local pastor to the high school kids. He’s even dating Angela Bishop, played by Julia Jones. Did I mention yet that she’s the Chief of Police in this little corner of winter wonderland? They play out little role-playing fantasies where she stops him on the road and one thing leads to another. It’s all fun and games, but will she find out who he really is, and will one of those stops be for real? That’s the kind of question the show sets up pretty early. And over 10 episodes, it’s all going to work itself out … or not. Depending on who you’re rooting for.

We don’t know why he left Washington, but we do know he’s learned to keep his “dark passenger” quiet and hasn’t killed in a decade. That all changes when a spoiled rich kid named Matt Caldwell (Robertson) enters the gun shop and his life. He’s an entitled little bugger who expects that rules don’t apply to him. He quickly gets on Dexter’s wrong side, but that’s not necessarily dangerous, because Dexter isn’t like other serial killers. He has a code bestowed upon him by his police officer father, and it doesn’t allow for killing just because someone gets on your nerves. But Dexter discovers that Matt was the cause of some deaths due to a DUI accident that he got someone else to cover for. Now Matt’s put himself in Dexter’s sights, and when Matt carelessly kills a protected white deer, it’s just the opening he was waiting for. Before the first episode ends, Dexter has fallen off the wagon, and we just so happened to be there for the relapse.

The search for Matt turns up nothing. Dexter meets Kurt Caldwell, played wonderfully by Clancy Brown. He muddies the water a bit when he claims his son is fine and has been in communication with him. Dexter doesn’t understand why Kurt’s not telling the truth, but all of that comes in time. Until then Dexter has to deal with a part of his past catching up to him when he finds a stranger in his cabin who turns out to be his son Harrison, played by Jack Alcott. At first he denies his identity but eventually succumbs to his feelings and brings his son into his life. If you’ve gotten caught up, you know that father and son have a few things in common. Both watched their mothers brutally killed as near-infants and both sat in that blood until they were discovered. It doesn’t take long before Dexter starts to suspect that Harrison has his “dark passenger”. Could this lead to a father and son serial killer team? I’m not going to give that away, but the conflict causes Dexter to struggle even as his own old habits start to return.

If you remember the series, you recall that each season put Dexter in contact with another important killer. Those relationships ran the spectrum from friendly to nasty, but they all ended badly. This bonus season of Dexter is no different there. Clancy Brown’s Kurt is a killer as well, and we learn this very early, so no spoiler here. He also might know Dexter killed his son. These bad guys seem to recognize each other. That puts them in conflict, with Harrison used as a pawn in the middle of the two killers.

The series also gives us a few other returns from the series. My least favorite is the return of Jennifer Carpenter as Dexter’s sister Deb. Of course, she was killed in the final season of the show, but she takes over James Remar’s spot in Dexter’s life. Remar played Dexter’s deceased father Harry, who appeared to him from time to time as a vision that he could interact with. Deb is that “ghost” this time. I truly miss Remar, but I never really liked Carpenter, and she continues to be one of the most annoying actors in television history. In the extras one of the producers remarked that everyone loved Deb. Sorry. Not quite everyone. It is what it is and perhaps most fans will like that particular return. David Zayas was one of the best actors in the original series, and he gets a limited return as Detective Batista. Also look for a cameo by John Lithgow in a flashback to his Trinity Killer activities.

You’re going to get the major stuff you’ve tuned in for. Hall is still brilliant in the role, and I rather enjoyed the added features of being a father and in a serious relationship that could fall apart at any moment. The snow mountains of Iron Lake are a wonderful contrast to the sunny climes of Miami that dominated the original series. It adds a nice cold and dark element to the mix that keeps this from becoming just another season of the show. Jack Alcott does a great job as his son, and there’s both a bit of a physical resemblance as well as in his mannerisms. Without revealing the ending, I think there is potential for the Harrison character to take over the reins and carry the franchise forward. I think I even have someone in mind for his “ghost” guide.

Dexter is presented in its original 2.39:1 aspect ratio. It’s all good. The 1080p image is brought to you via a solid AVC/MPEG-4 codec. You get pretty much a clean picture with nice colors. There’s a lot of dark stuff, so fortunately black levels are pretty solid. Detail is wonderful. This is a near-perfect image that still manages to contain enough subtle blemish to make it quite realistic. This time the image isn’t as bright and colorful as the series was. You get a much colder color temp with hints of blues. Great white levels and a more monochromatic feel to it all.

The extras can be found on three of the four discs. They each come with spoiler warnings that you have to check through to watch. I would wait until you’ve watched them all.

Why Now?: (2:13) Pretty much a promo, likely used that way on Showtime. Hall and some others talk about the things that went into bringing the character back.

Dissecting Dexter: New Blood: These can be found on the original sets. They are short features on one aspect of the show. There are 2: Deb Is Back (1:57) and The Kill Room (1:57)

All Out On The Table: (30:03) No, this is not a table read. That would have been my guess. Instead it’s the Behind The Scenes/Making Of feature with plenty of input from cast and crew and a lot of behind-the-scenes footage. There is a bit of reused interview footage from the earlier extras.

There are no plans to return to the franchise any time soon. You have to kind of look at this as the series ending you didn’t get the first time around. There is potential to continue, and one never really knows. I won’t tell you how it ends, because there are some deep surprises to come. “Surprising but inevitable.”

Gino Sassani is a member of the Southeastern Film Critic's Association (SEFCA). He is a film and television critic based in Tampa, Florida. He's also the Senior Editor here at Upcomingdiscs. Gino started reviewing films in the early 1990's as a segment of his local television show Focus. He's an award-winning recording artist for Omega Records. Gino is currently working on his 8th album Merchants & Mercenaries. Gino took over Upcomingdiscs Dec 1, 2008. He works out of a home theater he calls The Reel World. Favorite films: The Godfather, The Godfather Part II, The Body Snatcher (Val Lewton film with Karloff and Lugosi, not the pod people film), Unforgiven, Gladiator, The Lion King, Jaws, Son Of Frankenstein, The Good, The Bad And The Ugly, and Monsters, Inc.
Rick and Morty: The Complete Seasons 1-5 (Blu-ray) Armageddon (Armaguedon) (Blu-Ray)