Posted in: The Reel World by Gino Sassani on April 8th, 2022 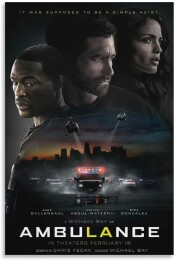 When I was a young boy I loved playing with my toys. We had some cool toys back then. Major Matt Mason, plastic dinosaurs, Hot Wheels, and Creepy Crawlers Thingmaker sets. Yeah, in those days a toy could cause third-degree burns and no one really worried about getting sued. Kind of takes the fun out of being a kid today. You know who else, I bet, loved to play with his toys? Michael Bay. I bet he had the coolest toys in his neighborhood. He probably wasn’t the best guy to be friends with, however. He didn’t invite the kids over to play with his toys. He likely charged you a nickel to watch him play with them. It’s many decades later, and Michael still has the coolest toys on the block. Only now you have to cough up twenty bucks if you want to watch him playing with them. I’ll bet he wasn’t the best guy to lend your toys too, either. He probably loved breaking stuff. There were likely plenty of toy casualties in the Bay home in those days. So you didn’t want him playing with your toys. Michael is still breaking a lot of toys. For a while he used giant robots to do his dirty work. Now he kinda feels like he’s played that game enough. Now he’s back to breaking cars … lots of cars. Ambulance is Bay’s latest adrenaline fix, and the damage is considerable. But is it worth the 20 bucks this time around?

Yahya Abdul-Mateen II plays Will Sharp. He’s a desperate man. He’s returned from a tour of duty serving his country, and his wife needs surgery that is considered experimental so not covered by insurance. He needs a couple hundred grand or he’s going to lose his wife. He tells her he’s going on a job interview, but he’s really going to see his brother Danny, played by Jake Gyllenhaal. Their father was a renowned criminal who wouldn’t hesitate to kill while robbing banks. Danny ropes his brother into a robbery that will pull in many millions for each member of the crew. Of course, things go sideways, and the next thing you know a cop’s been shot, and the two brothers hijack the ambulance taking him to the hospital along with a young EMT named Cam Thompson, played by Eiza Gonzalez. It might sound thin, but that’s pretty much the plot behind Michael Bay’s Ambulance.

From there it’s strictly an amusement park ride with one of the longest chase scenes in movie history. We get pretty much a tour of the L.A. top spots. The Target Center? Check. The L.A. River where thousands of films and television shows have been filmed? Check. Downtown? Check. The Freeway? check. The cops are chasing them but are reluctant to use the standard stop techniques because of the injured cop also in the ambulance. Cam is doing her best to keep him alive which include a phone conference with her doctor buddies to talk her through some surgery. Will does most of the driving and switches off with Danny when the surgery stuff happens because he’s a field medic in the service and someone has to have their hands deep inside of the cop’s chest to play footsies with the EMT.

On the outside Captain Monroe played by Garret Dillahunt is doing his best to get Danny to surrender. But when Danny seeks the help of a Mexican gang run by Papi, played by A. Martinez, things go from bad to worse, and a lot of folks are going to get killed. Of course, these things are going to happen when you’re trying to outrun like a zillion cops and S.W.A.T. trucks. Note Shemar Moore was nowhere to be found. For about two hours and change, it’s one explosive situation to another.

There are a lot of flaws in this one. The cinematography will make you dizzy. Bay’s using a lot of drone footage that takes us airborne then deep dives and then complete spins around and finally settles on what he really wants us to see. By then you’re looking for the Dramamine. The chase has to go to some pretty odd lengths to keep it going so long. You have to ask yourself why they go some of the places they go even though it likely will get them boxed in like the parking lot of the Target Center. I know why they did it. They did it because Michael Bay has drawn up some crazy explosive action that looks really cool with some of these backdrops. Someone just turned Michael loose in another toy shop, and the results aren’t pretty. Remember the kid who liked to torture toys in Toy Story? That was Michael Bay.

To the film’s credit, Bay cast the film well. Abdul-Mateen II is an incredibly sympathetic character throughout, but oddly enough even Danny has some redemption coming in the film. Gonzalez is also a strong character, and with all of the carnage going on, it’s the cramped spaces inside the ambulance with these three actors that pays off the most. There’s some nice chemistry there, and there’s some heart there. Unfortunately Bay doesn’t appear to think that’s enough. The film runs 30 minutes too long, and at every busted up car he risks losing the real drama he has going on with his actors and characters.

Michael Bay is an innovative filmmaker. He always has been. No one does action quite like he can. He’s developed some good relationships with military and police departments, and likely with some automobile makers, and so he can put a lot on the screen with that big budget he manages to get each time out. I have a lot of respect for the man’s chops, but this one wears you out and stops being fun after the first hour because he’s basically repeating himself throughout. This thing has already started giving me nightmares. I have this recurring dream that Michael Bay comes over to my house and picks up a few of my vintage toys and looks at me and asks …”You wanna play?”

Gino Sassani is a member of the Southeastern Film Critic's Association (SEFCA). He is a film and television critic based in Tampa, Florida. He's also the Senior Editor here at Upcomingdiscs. Gino started reviewing films in the early 1990's as a segment of his local television show Focus. He's an award-winning recording artist for Omega Records. Gino is currently working on his 8th album Merchants & Mercenaries. Gino took over Upcomingdiscs Dec 1, 2008. He works out of a home theater he calls The Reel World. Favorite films: The Godfather, The Godfather Part II, The Body Snatcher (Val Lewton film with Karloff and Lugosi, not the pod people film), Unforgiven, Gladiator, The Lion King, Jaws, Son Of Frankenstein, The Good, The Bad And The Ugly, and Monsters, Inc.
The Handmaid’s Tale: Fourth Season Last Looks (Blu-Ray)